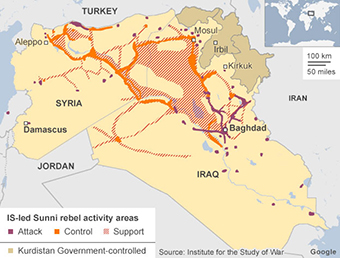 The map shows ISIS-led activity.  Areas controlled by the group are in orange. (Institute for the Study of War)

When the Islamic State (ISIS) suddenly began to dominate headlines, their quick takeover and brutal acts surprised the world–but they shouldn’t have. Earlier this year, as ISIS slowly gained ground in Iraq and Syria, polls had revealed a sea change in attitudes that opened the door to the movement’s seizure of Mosul in June and subsequent sweeps across northern and western Iraq. Insecurity was rampant in those Sunni regions; economic conditions were deteriorating; and alienation from the Shia-majority government was increasingly pervasive.

The security collapse in the Sunni regions was dramatic by early 2014, as shown by polling by IIACSS, an Iraqi market research firm, for Gallup International’s World Social Values Survey. Some 21% of residents in Diyala and fully 25% of people in Nineveh said a family member had suffered a crime in the past year. In contrast, just 1% of families in Basra in the mostly-Shia south had experienced such violence. Sentiment was strong that security was deteriorating in the mostly-Sunni west (a massive 84%) and north (55%), while more than two-thirds said it was improving in the south, a Greenberg poll found.

Iraqi security forces, which came under the thumb of the Shia-dominated central government in the three years following the withdrawal of US forces, were part of the problem. Police or military frequently interfered with people’s private lives in their neighborhoods, according to 57% of Diyala residents and an eye-popping 75% of those in Nineveh, where Mosul, Iraq’s second-largest city, is located, the IIACSS poll found. A mere 2% of Basra residents had similar complaints.

There was a 180-degree turn in attitudes in Anbar province, source of the Sunni “awakening” that pushed out al-Qaeda in 2007-09 and restored governmental authority, according to focus groups in early 2014 for an NGO, Think Peace. Locals now saw the Iraqi Army as a tool of the Shia and of neighboring Shia-dominated Iran, which propped up then-Prime Minister Nouri al-Maliki. The police were bitterly resented for crushing peaceful Sunni protests last year over neglect of Sunni concerns by Maliki’s government. Small wonder that the collapse of Iraqi security forces on ISIS’ arrival in Sunni regions was little mourned, at least initially.

Even more preoccupying than insecurity for Sunni Iraqis were the accompanying economic problems in an increasingly chaotic environment. Greenberg reported that in the north, unemployment was the top concern, cited by 62%, well ahead even of security. In Diyala, IIACSS noted that 41% of residents had gone without food at some point in the prior year. In Anbar, the Think Peace focus groups found that youth were principally concerned with their economic status, not politics: they “care more to improve their daily lives and career opportunities.” Nor did Sunnis expect things to change: unpublished data from IIACSS polling in February show only one-fifth of Sunni Iraqis expected their economic situation would improve in the coming year, against majorities of the other sects.

Along with insecurity and impoverishment, political alienation was rife in the Sunni regions by early 2014. The Greenberg poll, taken from January to March, showed that few approved of the country’s direction in the largely-Sunni west (24%) or north (35%), while 54% did in the largely-Shia south. Huge majorities in the Sunni regions said government was becoming less responsive to their needs, while most in the south said it had become more so. (Ironically, the poll’s feel-good report published by the National Democratic Institute, the US-government funded democracy promotion organization which sponsored it, was titled “Iraqi Mood Improving Despite Divisions” – reflecting how official Washington underplayed the real story).

There were plenty of signs of political trouble in the polls–for those willing to look. Greenberg found most in the Sunni west felt the April parliamentary election would not be fair, while most in the south said it would be. The IIACSS poll reported that only 25% in Diyala and 27% in Nineveh thought the elections would offer a genuine choice, against 75% in Basra. In Nineveh, most wanted a strong leader who did not bother with Parliament and elections–helping to explain why the door was open to ISIS in Mosul.

The warnings were particularly stark in a Gallup poll taken in late May and early June, literally up to the fall of Mosul on June 9. In the Sunni heartland provinces, it found only 30% had confidence in the national government, a 22% drop in just six months. In contrast, the majority in the Shia south (53%) had confidence in the Maliki government, little change since last year.

Yet if the Sunni minority’s disillusionment with the Iraqi government is a mile wide, support for ISIS runs only an inch deep among them. According to Munqith Dagher, the CEO of IIACSS, “The support for ISIS in Sunni areas is not great and even those who support it do so due to their hate for Maliki and Shia central government policies.” ISIS is hardly likely to deliver the security and prosperity they crave, with its commitment to continuing conquest and an economy based on property confiscation and illicit trade. It particularly enrages Iraqi women, even in conservative Anbar, where the focus groups found that women preferred the Iraqi Army, despite its flaws, to the militants who harshly restricted their movement and dress.

Perhaps the most important positive development in the struggle against ISIS is the Iraqis’ own desire to put their country back together. Contrary to the myth that Iraq is less a state than a centrifuge of hostile communities ready to fly apart, Iraqis see themselves as sharing a common identity and nationality. Nearly all—89%—are proud of their Iraqi nationality, according to IIACSS polling. This includes 98% in mostly-Shia Basra as well as 94% in Diyala and 85% in Nineveh, heavily-Sunni provinces (and even 57% in Erbil, the heart of Iraqi Kurdistan).

The military struggle against ISIS will be challenging, but permanently vanquishing it poses an even greater political challenge: “To show the ordinary Sunnis, and not their politicians, whom they don’t trust, that they will have a seat at the political table of Iraq,” as Dr. Dagher puts it. While the polling highlights the weaknesses of Iraqi politics and policies that let ISIS in, fortunately it also suggests that the quest to re-establish a viable Iraqi state is not a mission impossible.

Craig Charney, an IPI Senior Adviser, is president of Charney Research, a survey research firm specializing in emerging markets and crisis countries which has conducted polls in Iraq.