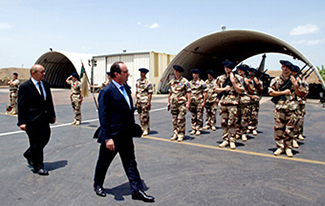 On July 15, 2014, French President François Hollande launched Operation Barkhane, a counterterrorism force intended to hunt down terrorist groups in Sahel countries and prevent them from re-forming. This new mission is the continuation of Operation Serval, which was launched on January 11, 2013 in Mali and had the following three objectives: to stop terrorist groups’ offensives; to ensure security in Bamako in order to protect French nationals; and to preserve Mali’s territorial integrity. According to Defense Minister Jean-Yves Le Drian, France has fulfilled its mission, but has to prevent “the emergence in another regional state of a threat similar to that which prompted the 2013 intervention.”

Operation Barkhane shows continuity in France’s defense policy, as well as the country’s need to maintain its political influence in Africa by enhancing military operational capacities. Where other states are reluctant to do so, France has an interest in getting involved politically and militarily. While the “fight against terrorism” narrative is useful in mobilizing stakeholders, France’s broader interests in the Sahel–political, economic, and strategic–should be clarified.

The intervention in Mali showed the efficiency and responsiveness of France’s political and military presence through pre-positioning, robust engagement, and flexible deployment. But the reorganization of its forces, which is necessary to respond to transnational security threats, is not new. In 2005, France reoriented its military cooperation toward regional organizations to support the five components of the African Standby Force (ASF) becoming operational. The Sahel is now being prioritized because France wants to focus its military action in an area where its interests are under direct threat. The French military has long been present in the Sahel-Sahara region, and longstanding partnerships with African countries have been implemented.

The existence of a single operational command in Chad (1,300 troops) for the whole Sahel is a new element. Operation Barkhane has a base in Mali (1,000 troops), an intelligence center in Niger (300 soldiers), and a special forces center in Burkina Faso. While Côte d’Ivoire (with its 550 troops) will serve as an operational base to support the deployment, the bases in Senegal (350 troops) and Gabon (450 troops) remain regional cooperation centers. Some 3,000 soldiers will be mobilized in a wider area of action to support the G5 members (Burkina Faso, Mali, Mauritania, Niger, and Chad).

France provides human, financial, and logistical means, but this deployment, dedicated to the fight against armed terrorist groups, will not affect the French military’s traditional missions. Under military cooperation, African armies will continue to receive training and equipment to carry out joint actions with French troops. The presence and/or transit of French forces in Burkina Faso, Mali, Niger, and Chad are regulated by cooperation agreements that date back to the 1960s and have been updated since. Mauritania, for its part, signed an agreement with France to fight terrorism in November 2013.

Three priorities of France’s policy in Africa–Africanization (supporting African capacities), Europeanization (including French action in European policy), and multilateralism (for France to act in a multilateral framework, such as the United Nations)–have been adapted to the realities in the Sahel following the final declaration of the December 2013 Elysée Summit for Peace and Security in Africa. However, with its intervention in Mali, France is alone on the Sahel front.

The anti-terrorist rhetoric is popular among G5 heads of state, because the French presence fills the gaps of African militaries at the national, regional (ASF), or continental (African Capacity for Immediate Response to Crises) levels. Whether the French operation is an intervention model that African countries cannot replicate–or one that simply serves to cover up their inaction—it does not appear to have galvanized states into providing their own militaries with the resources needed to confront the threat.

However, that France and its African partners agree on an offensive against so-called terrorist groups hides an important aspect of the political problem. In the face of rising social and economic discontent in Africa and the multitude of groups who violently challenge state monopoly, it has become difficult to distinguish between those whose fights are political and those who hide their struggle behind religious discourse and refuse to compromise their principles.

Emphasizing the fight against terrorism serves as a reminder that it is an international challenge that follows the 9/11 attacks. Beyond France’s experience in Africa, lessons should be drawn from United States programs that have been implemented in the Sahel for more than 10 years. All G5 members have benefited from the Pan-Sahel initiative, created in 2002, which became the Trans-Saharan Counterterrorism Initiative in 2005. Officially, the main objective is for actors to prevent factors that lead to radicalism, but this rhetoric should not hide a more complex reality: religious radicalization cannot be prevented through military means alone.

Finally, the warm welcome that the French military received in Mali in 2013 shows that their presence is a relief for populations that have been abandoned by the state, and who face threats against which the defense and security forces cannot protect them. Agreements signed between African heads of state and French representatives, which are supposed to preserve the partners’ sovereignty, do not always win domestic consensus. This was illustrated by criticism against the defense cooperation treaty between France and Mali, and against the opening of bases in Mali (Gao, Tessalit) and Niger (Niamey, Madama). The political use of France’s historical ties, which are a legacy of the colonial past, is both the strength and weakness of its military involvement in Africa.

Efforts are needed to allow African populations and civil societies to better understand a rhetoric that promotes shared strategic interests between France and African countries. First, African heads of state must make room for a debate to explain the French presence on their territory. The lack of interest and vision of some African leaders for their militaries can explain their inactivity. Secondly, France has to be transparent regarding its objectives and the reasons for its presence in its former colonies.

The reorganization of its military deployment in the Sahel-Sahara region is another way for France to maintain its political, cultural, and economic influence in Africa. Protecting its nationals and companies can allow France to maintain the most vital elements of its international standing.

Amandine Gnanguênon is a Senior Researcher in the Conflict Prevention and Risk Analysis Division at the Institute for Security Studies (ISS) in Dakar. This article first appeared on ISS Today on August 19, 2014.