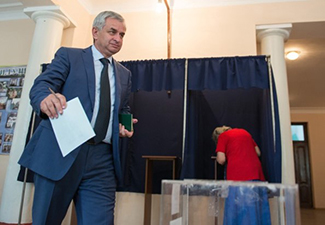 Raul Khadjimba casts his ballot for the presidential election in Sukhumi, the capital of Georgia’s breakaway republic of Abkhazia, on August 24, 2014. (Artur Lebedev/Anadolu Agency/Getty Images)

On August 24, the de facto republic of Abkhazia chose a new president, Raul Khadjimba, by a wafer-thin majority. This was not just another election in the post-Soviet sphere. It was a referendum on two conflicting narratives of what happened in this disputed territory during the last week of May this year, when an opposition alliance that included Khadjimba ousted the elected president, Alexander Ankvab.

For many, the overthrow of President Ankvab was a coup that flagrantly breached the constitution and established a dangerous precedent for regime change in Abkhazia. For Khadjimba and his supporters, this new electoral victory legitimates Ankvab’s ouster and brings an unhappy chapter in Abkhazia’s recent history to a close while providing an opportunity for national rejuvenation.

Having overcome war and more than two decades of international isolation, Abkhazia has attracted ever-increasing support from the Russian Federation during Vladimir Putin’s presidency, and Putin sent a prompt congratulatory message to the victor. Only a handful of UN member states have followed the Kremlin’s lead in recognizing Abkhazia as an independent state, however, and the election was predictably dismissed by Georgia, which considers Abkhazia as a breakaway region within its borders. Georgia’s allies, including the EU, US, and NATO, followed suit.

Less foreseeable than the international reaction is how the new administration will govern Abkhazia and whether Khadjimba will put together an inclusive government that goes beyond his electoral coalition to secure domestic—if not international—legitimacy. The vast majority of UN member states may not recognize Abkhazia, but this will matter little to Raul Khadjimba right now, whose hour has finally come. His mandate is slim, however, and the process by which he came to power dubious.

Early Elections Provide Cause for Concern

This was Abkhazia’s third presidential election in five years, and each election tells a story. The 2009 contest came shortly after Russia’s recognition of Abkhazia following the “five-day war” with Georgia and allowed incumbent Sergey Bagapsh to cruise to a comfortable second-term victory. Bagapsh’s unexpected death in 2011 forced an early election, which saw then-vice president Alexander Ankvab defeat the leader of the main opposition party, Raul Khadjimba.

Ankvab soon gained a reputation as “Mr. No”—exasperating even his supporters by spurning requests or changing his mind citing presidential prerogative. By the spring of this year it was clear that disenchantment had set in for a substantial portion of the electorate. In May, an alliance of influential opposition figures and groups organized protests in the center of the Abkhaz capital, prompting Ankvab to flee on June 1 (he now resides in Moscow) and the calling of early elections. Irrespective of the result, this election was going to be controversial.

Two frontrunners quickly emerged among the four middle-aged military generals who presented themselves as candidates to the electorate. Contesting his fourth presidential election was Raul Khadjimba, a key player in the mobilization of partisans in May. Significantly, Khadjimba was backed by former rivals Sergey Shamba and Beslan Butba, the latter being the richest man in Abkhazia and owner of the state’s only private TV station. Khadjimba’s main challenger was former head of the state security service, Aslan Bzhania. Bzhania’s supporters claimed a Russian hand played a part in dislodging Ankvab because he had proved insufficiently pliant.

Worse was to follow. On July 1, nearly 23,000 residents—constituting 15 percent of voters in Abkhazia—were struck off the electoral register, the vast majority of them ethnic Georgians living in the southeastern district of Gali. Ostensibly debarred because they also hold Georgian passports, it was difficult to avoid the conclusion that many “Khadjimbists” simply wanted to deny a voice to a large section of the community that had never voted for Khadjimba and were very unlikely to do so on this occasion. Another law rushed through parliament established polling stations in Istanbul and the nearby Russian city of Cherkessk to enfranchise members of the Abkhaz diaspora, some of whom had never been to Abkhazia.

The election campaign was the dirtiest on record. Accusations—frequently disseminated by rumor and innuendo—echoed throughout Abkhazia. Rarely proven charges proliferated regarding candidates’ murky pasts, insufficiently glorious war records, vote-buying, corruption, or status as proxies for some larger, darker force. Occasionally, the tension bubbled over into violence. The sound of semi-automatic gunfire in the capital turned out to be a politically motivated attack on a journalist. A melee outside the Central Election Commission’s press center also involved a semi-automatic weapon. In a place where informal power frequently trumps formal authority, Abkhazia’s hapless policemen seemed unwilling to decisively intervene for fear of discommoding powerful figures.

The lack of reliable opinion polls in Abkhazia meant there was no way of separating partisan spin from real voting intentions, which only added to the uncertainty. Whereas Bzhania made clear that he would accept defeat at the polls, Khadjimba’s inner circle made no such offer, claiming overwhelming support and convinced that only electoral malpractice could rob them of victory.

Turnout was high on election day at 70 percent of registered voters, according to the election commission. Almost 100,000 people cast their ballot, including diaspora in Moscow, Cherkessk, and Istanbul, where voting was briefly suspended by the Turkish authorities. Bzhania’s team claimed that passports were hastily and unlawfully distributed to the Abkhazia diaspora in the run-up to the election, and certainly Khadjimba did disproportionately well in these constituencies—taking, for example, 90 percent of the votes cast in Cherkessk.

In the end, Khadjimba achieved a slender first-round victory with 50.57 percent of the votes. Aslan Bzhania, took close to 36 percent while ex-defense minister Mirab Kishmaria and ex-interior minister Leonid Dzapshba lagged far behind with just over 6 and 3 percent, respectively. Had Khadjimba secured a few hundred votes fewer, a second round would have been necessary. Had the Georgian voters of Gali retained their right to vote and the Abkhaz diaspora in Cherkessk and Turkey remained off the electoral list, a Khadjimba victory might not have been achievable.

The election has elevated one half of the population but disenchanted the other. Khadjimba’s first task will be to gain recognition from those he has vanquished and disenfranchised. Even if there is a will, there may not be a way, as any extended hand to the supporters of the ousted president or the ethnic Georgians risks alienating key parts of his support base.

Khadjimba will have to quickly learn how to transform himself from populist opposition leader to a president for all shades of opinion in Abkhazia. He has only to remember the fate of his ousted predecessor to establish the potential costs of failure.

Dr. Donnacha Ó Beacháin is Director of Research at the School of Law and Government, Dublin City University. He travelled to Abkhazia for the August 2014 election and has met with all four candidates in the race and their campaign teams.