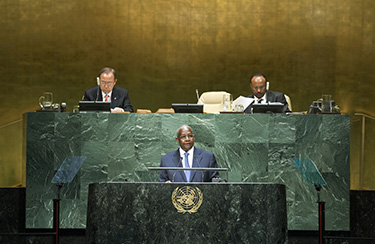 Sam Kahamba Kutesa (centre), President of the sixty-ninth session of the General Assembly, addresses the general debate of the session. (UN Photo/Kim Haughton)

Observing the annual opening session of the UN General Assembly from a certain distance for the first time in ten years, it is quite refreshing. On the one hand, it spares me the “circus” of road blocks, media vans, motorcades, receptions, and overcrowded streets around Turtle Bay in New York. On the other hand, stripped to its essence—the actual debate—the event remains a unique opportunity to take the pulse of global affairs, as I have argued in the past. The statements on the threat posed by the Islamic State and extremism on Wednesday make the new “coalition of the willing” look more like a “coalition of the ambiguous,” whose members have competing interests and divergent agendas. This properly reflects the tone of global reality beyond the rhetoric, highlighting the growing geopolitical tensions.

Leaders in New York are focusing on the crises at hand, in particular terrorism and extremism, Ebola in West Africa, and climate change. Development, and in particular the post-2015 agenda, which currently proposes 17 new Sustainable Development Goals, also takes central stage in the speeches, with countries stressing different angles, be it poverty, inequality, health, or environment, depending on their main concern. It is not surprising that governments focus on the urgent troubles under the spotlight.

Still, despite the broad agenda, there are a few major challenges that deserve more attention. Ignoring them today will only increase the risks and costs of dealing with their consequences in the future. These issues have to do with population movements and inadequate governance, two defining challenges in the years to come.

It comes with great surprise that the human misery of desperate migrants is not taking more center stage at the General Assembly. In the Mediterranean alone, roughly 130,000 refugees have made the crossing toward European coasts this year, more than the double of those who did it in 2013. Over 3,000 have died in shipwrecks this year, a fourfold increase over last year. Refugees fleeing wars and conflict in Syria, Gaza, and Africa are taking the risk because the situation in their own countries seems hopeless. So, solving these conflicts will do a lot to reduce the number of migrants.

However, that is only part of the picture. In a more interconnected world, migration is a fact of life. But, despite high-level discussions about international migration in 2013, no progress has been made to fix the global management of migration. Migration will only increase importance in—and put increasing strain on—international relations in the coming years. This is true in the Asia-Pacific region, in Europe, and in the US, where the chance for migration reform has faded away. Better integration of migration into the post-2015 development agenda would help ensure successful migration management policies and defuse the tensions that massive population movements can trigger.

It is a known fact that by 2050, 70 percent of the world population will be living in cities. According to the report of the United Nations High-Level Panel on the Post-2015 Development Agenda, “Cities are where the battle for sustainable development will be won or lost.” Some analysts believe that urban fragility has emerged as a “new frontier of warfare,” whether situated inside a war-torn state or a largely peaceful one. Forty-one of the top 50 dangerous cities in 2013 are in Latin America. And cities contribute about 70 percent of energy-related greenhouse gas emissions, despite only accounting for 2 percent of global land area.

Yet, these worrying trends are not captured by the General Assembly’s debate. The absence of discussion about urbanization is also a missed opportunity in terms of innovative solutions for peace and development. In fact, the city-level of policymaking has been one of the most innovative in recent years. The urban regeneration of Medellin, success stories in Mumbai or Johannesburg, innovative use of big data in Singapore, to name a few examples, could help develop new approaches to service delivery, energy conservation, and urban planning in densely populated areas. If this is not perceived as a global issue, it is probably worth remembering that today’s revolutions and protests, including the Arab Spring, are urban phenomena, which have been facilitated by the networks and proximities that cities offer, as well as their dissatisfied masses. Fragile cities are becoming as dangerous as fragile states.

It comes with less surprise that the growing disconnect between citizens and state institutions does not take center stage in the UN General Assembly’s debate. After all, those very governments are taking the floor and are not prone to self-criticism in front of a global audience. However, the state-citizens gap runs deep in both rich and poor countries.

Recent years saw huge numbers of people around the world take to the streets to protest their governments and policies. The triggers have been diverse, but the underlying causes are common: wide income-inequality, government inefficiency, corruption, and shoddy public services. There is the perception that the gap between people and institutions is widening, due to an erosion of trust in governments. My colleague Youssef Mahmoud has described very well the pervasive disconnect between state and citizens on these pages: “The pressures from below stem primarily from restive populations who have acquired a different understanding of the realities they live in relative to the elites in their countries, and they are pushing for greater agency in the ways they are governed. Where governments have been unresponsive, mistrust between citizens and governing elites has grown, culminating at times in open defiance, mass protests, and revolts—often with deleterious consequences for all. In many contexts, the nation-state is becoming a much weaker and more vulnerable institution. In several cases, it is disintegrating.”

Borders and national identities have been dismissed too soon, following the emergence of the globalized economy and the supposed “end of history.” Separatist movements are one facet of the rise of nationalism in Europe, Asia, and the Middle East. Incidentally, mass movements of refugees, as described above, remind people of the importance of well-guarded borders. The backlash against immigration is a determinant in the surge of nationalist parties in all Europe. Russia’s President Vladimir Putin represents another aspect, and probably one of the most dangerous, when he claimed the right and duty to protect Russian speakers wherever they live. The territorial disputes in the East and South China seas are also well known. China, Japan, and India have nationalist leaders, who are using the rhetoric of national revival to spur economic and social reforms. According to an opinion poll, more than 90 percent of Japanese and Chinese have an unfavorable impression of each other’s country. There is no lack of cases to exemplify this trend.

So far, one national leader at the General Assembly has raised the issue. President Susilo Bambang Yudhoyono of Indonesia, a country not immune to nationalist impulses, urged the delegations to “push the frontiers of nationalism into a new globalism where we can devise solutions to national, regional, and global issues all at the same time.” We hope someone is listening because, once leaders push their citizens on the edge of nationalism, it is very hard to bring them back.