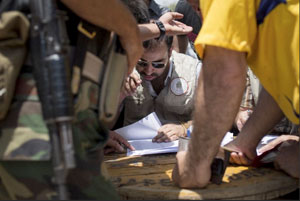 In Qaraqosh, Iraq, an aid worker checks names during aid distribution to a group fleeing Mosul after ISIS took over the city, July 22, 2014. (Vianney Le Caer/Demotix/Corbis)

Attacks on the so-called Islamic State (ISIS) by the US and its allies have forced aid workers in the region to make a range of contingency plans, said David Miliband, president and CEO of the International Rescue Committee. “We’re having to be extremely fleet of foot in the way that we continue to service the humanitarian imperative of bringing help to people in need without putting our people in danger,” he told Marie O’Reilly, associate editor at the International Peace Institute.

Mr. Miliband said the crisis in Syria has stretched the humanitarian system to its limit. “If I’d been doing this interview three years ago, and I’d said there would be 200,000 dead, chemical weapons used, nine million displaced within the country, three million refugees in the neighboring countries, many people would have said I was being alarmist.”

The crisis in Syria is forcing the humanitarian system to confront questions of impartiality, aid worker safety, and how to meet the needs of women and girls, who make up the majority of refugees—all topics covered in this Q&A with Mr. Miliband.

The US and its allies are now leading a campaign of airstrikes in Syria as well as in Iraq. What impact are these strikes likely to have on the delivery of humanitarian aid and on the safety of aid workers?

The story of Syria and its crises over the last three years has been obviously a terrible one for the people of Syria and for the humanitarian community in general, because we’ve seen political division spill over into the humanitarian sector. And in the circumstances of an imploding Syria, the humanitarian need both within the country and in neighboring countries is overwhelming.

I am very careful not to comment on individual military or other operations because we have staff working on the ground throughout the region, and it’s very important that I don’t compromise their safety at all. I think that the fairest thing to say is that the IRC, like all other humanitarian organizations, is making a range of contingency plans. And we’re having to be extremely fleet of foot in the way that we continue to service the humanitarian imperative of bringing help to people in need without putting our people in danger.

If I’d been doing this interview three years ago, and I’d said there would be 200,000 dead, chemical weapons used, nine million displaced within the country, three million refugees in the neighboring countries, many people would have said I was being alarmist. But that’s the situation that we’re dealing with, and it’s one that is stretching the humanitarian system to its absolute limit.

If humanitarian aid workers need to remain impartial so that they can access populations at risk, is it problematic that many of these states are presenting humanitarian aid as part of the political response to the so-called Islamic State?

That means you’ve immediately got an extremely complex set of interactions between politics and humanitarian work. They’re not living in completely separate boxes, but you’ve got a degree of overlap. And it’s different in different circumstances. There are different players—some state, some non-state actors; you’ve got different circumstances, and I think it’s important to keep the generalizations to the areas where they are true. And the truth, I think, is that you’ve got this causality flowing in both directions.

I don’t want to start pointing the finger about individual decisions, but I think that it is important that those of us in the humanitarian system who have been calling for more attention to humanitarian suffering don’t want to be in a position where we start complaining that the humanitarian need starts getting some attention. And I think that as long as we hold fast to our determination to be independent in the way that we deliver aid, and neutral as between different people, we’ll actually help more people. And that’s the challenge at the moment, because in the Syria region, the gap between the amount of need and the amount of provision is growing, and that’s something that has to be addressed.

The IRC recently released a report on the situation of Syrian women and girls, called “Are We Listening?” What are the obstacles to meeting their needs? Why is the humanitarian effort falling short in that regard?

Our report about the position of women and girls in Syria is really one of the most sobering documents I’ve read in the last year, not because of the power of IRC’s rhetorical prose, but because this is a report encapsulating the voices of Syrian women and girls—thousands of them whom we’ve helped over the last three-plus years.

Now, I think what’s important is not to see the degree of suffering, which is about sexual violence, domestic violence, forced early marriage, lack of opportunity. But as you say, it’s trying to diagnose why that’s happening.

The scale of the problems is partly the trauma of the civil war, which is by definition unacceptable behavior on all sides, but which also produces unpardonable behavior, and women and girls are on the frontline.

But it’s also the case that the humanitarian community—the international community—has made big commitments to women and girls in the last 10 years, which is good. But it’s not yet fulfilling those commitments, which is not good. And the reason for that, I think, is partly the sheer scale of the Syrian catastrophe, where millions of people suddenly overwhelmed the whole system.

But secondly, I think we’ve still got a ways to go to make sure that we understand that provisioning women and girls—who, after all, are the majority of refugees and IDPs [internally displaced persons] around the world—is not something that can be left just to women’s units. And it’s something that has to infuse the health, education, food, economic programs that are run. And that’s still an argument or campaign or philosophy that has to be spread more widely.

And I think that the evidence of the report is that there are some very practical things that we can do now. For example, the isolation that’s felt by adolescent Syrian refugees in neighboring countries is in large part because they don’t dare go to school, or they don’t dare going to community centers. And you can address that and actually kill two birds with one stone. You can get some education out, but you can also get some life and breath into the lives of girls who are currently trapped at home.

Beyond the current crises, what priorities are you focusing on in advance of the World Humanitarian Summit in 2016, which aims to set a new agenda for global humanitarian action? Will you be advocating for humanitarian goals, or are you looking to incorporate those into the sustainable development goals (SDGs) before then?

I think that there are three things that are really important for our sector. One is about outcomes, and I do think that we should be arguing for humanitarian goals—I call them “HuGos.” That would set the unifying direction for our sector and establish some measurable benchmarks against which we assess progress.

I think that the needs of conflict-afflicted populations, whether educational needs or health needs or protection needs, need to be reflected in the SDGs. So I would say the summit needs to be about: 1) outcomes; 2) evidence—we’ve got to have the evidence revolution in the humanitarian sector that has taken place in the development sector over the last decade; and thirdly, I’m interested in picking up the buzzword of “innovation” that is being used strongly by the UN Secretariat and the Secretary-General in formulating this.

We’ve got to think about step-change improvements as well as incremental improvements. And that might be around the use of cash, which is a big thing, and where the IRC is doing a study at the moment. It might be about other aspects of policy. But I think we’ve got to keep our eyes open for that as well.