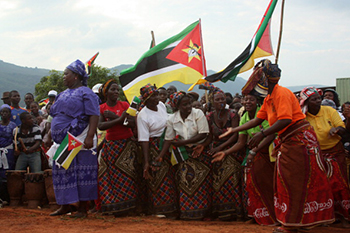 Following months of conciliatory talks, Mozambique’s Frelimo ruling party and the Renamo opposition party agreed to a ceasefire on Sunday, August 24. The deal between the government and the former rebel group formalized a peace agreement brokered between the two parties earlier in the month. It provides for the implementation of a number of measures aimed at finding a binding and peaceful solution to the recent political impasse, ahead of presidential elections due to take place in October.

Over the past 24 months, Mozambique witnessed the worst outbreak of political violence since the country’s 15-year-long civil war ended in 1992. Akin to that conflict, the recent hostilities again placed the Front for the Liberation of Mozambique, known by its Portuguese acronym Frelimo, at loggerheads with the Mozambique National Resistance, or Renamo.

While disparities in ideology and policy between the two groups were settled at the ballot box rather than on the battlefield in the two decades following the war, the situation changed in October 2012 when long-serving Renamo leader Afonso Dhlakama formally disengaged from electoral politics and returned to the movement’s wartime headquarters in Mozambique’s Gorongosa Mountain range. Dhlakama claimed that his decision was based on Frelimo recanting the core principles of the country’s post-war pluralist democracy.

Following Dhlakama’s return to Gorongosa, sporadic attacks by suspected Renamo rebels began in the group’s operational and political stronghold, Sofala province. By 2014, these incursions, which targeted both civilian and security interests, had extended into the provinces of Nampula, Niassa, Manica, Tete, and tourist-popular Inhambane.

Initially circumspect in their approach to Renamo’s violence, Frelimo later responded more forcibly, by initiating a number of raids targeting suspected Renamo bases, including Dhlakama’s Gorongosa garrison. With Dhlakama evading capture, and incidents of reciprocal violence escalating, concerns were growing that Mozambique may once again be on the precipice of civil war.

The new peace accord includes an amnesty law sanctioned by Parliament on August 12. Under the terms of the bill, Dhlakama was granted amnesty for acts of violence perpetrated by his supporters, allowing the Renamo leader to both campaign for and contest the Mozambican presidency in the elections scheduled for October 15, 2014. The agreement would also see amnesty being extended to all Renamo fighters involved in acts of politically motivated violence dating back to at least 2002.

Although the amnesty law has been ratified, there are a number of other terms of the peace agreement that, while agreed upon in principle, are still subject to further negotiation. One such issue pertains to the proposed demobilization and integration of Renamo combatants within the Mozambican armed forces and police. Although this initiative is expected to commence in due course, the number of Renamo combatants that will be assimilated in the Mozambican state security apparatus remains unclear.

Also to be decided is whether the agreement will provide Dhlakama and the wider Renamo leadership with access to the state’s patronage resources, which the opposition leader had accused the Frelimo headship of exploiting for personal gain. At the time of writing, it was reported that the establishment of a public fund or trust to provide Renamo with financial compensation was being debated at a parliamentary level; however, no concrete decisions have been made in this regard.

The peace agreement and the concomitant provision of amnesty to Renamo members is a significant step in consolidating a binding and long-term peace in Mozambique. The development will undoubtedly go a long way in placating the fears of a local population that, both physically and emotionally, continues to bear the scars of the country’s brutal civil war, which killed nearly one million people. The prospect of stability will also be welcomed by foreign investors attracted by Mozambique’s burgeoning oil, gas, and other mineral reserves, who were becoming jittery in light of the spiraling violence.

A return to conflict would also have been an unfavorable outcome for both Frelimo and Renamo. From Frelimo’s perspective, declaring war on an adversary that no longer enjoyed the popular support or financial resources to challenge the ruling party politically would be a significant gamble. In doing so, Frelimo would not only risk traumatizing its local voter base and foreign stakeholders, it could also validate Renamo’s “power-hungry” account of the ruling party. With general elections around the corner, Frelimo was hesitant to jeopardize popular support at the ballot, particularly in light of the political ascendency of the Democratic Movement of Mozambique opposition party. For its part, Renamo was cognizant of the fact that it no longer had access to the weaponry, manpower, and patronage it enjoyed during the country’s civil war. Consequently, any return to full-scale hostilities would likely have seen the movement quashed by the army, albeit at a significant economic and human cost.

That being said, the calm climate prevailing in Mozambique remains tenuous and could well be short-lived—particularly if the issues of rebel integration and economic concessions, which were central to the resumption of Renamo’s armed insurrection, are not fully addressed. Any perception that Frelimo may be rescinding the terms of this agreement, of which the ruling party has been accused before, could precipitate a return to hostilities and undermine any further attempts at peace.

In November 2012, Dhlakama acrimoniously declared “I am not a child to be tricked” when questioned by Agence France Presse about the status of negotiations between himself and Mozambican President Armando Guebuza. In the same interview, the Renamo leader threatened to “destroy Mozambique” should his demands not be met. While it can be debated whether Dhlakama ever had the intent or capabilities to make true on these words, neither Frelimo nor Mozambique can afford to take the risk.