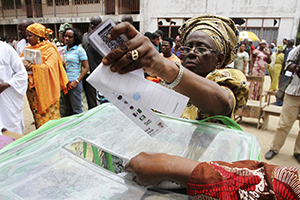 A woman casts her vote during the presidential elections in Lagos, April 16, 2011. (Reuters/Akintunde Akinleye/Nigeria)

One hundred years after British colonialists unified two protectorates to create Nigeria, the problems inherent in lumping together myriad different peoples and regions continue to provoke debate and controversy. This is often directed at Nigeria’s federal system.

State authorities frequently clash with the federal government, political battle lines and alliances are often made with regional and ethnic divides in mind, and accusations of inequalities in the country’s federal structure rarely die down. The issue can even get so controversial that in his opening speech at Nigeria’s National Conference, convened to discuss the state of the nation, President Goodluck Jonathan explicitly barred any discussion about dissolving the federation.

He may have done this to silence those circles which have been clamoring for the dismantling of Nigeria’s federal union, but this sanction also prohibits delegates from raising many of the reasons for which the federal system ought to be maintained. And the case for the federal structure can and should be made strongly. It may not work perfectly in its current incarnation, but history suggests that it is the best option for Nigeria.

Nigeria’s federal experience began in 1954 under the tutelage of the British colonial authorities. The founding fathers of the country opted for federalism because of their belief that federal states have the intrinsic structural and institutional capacity to accommodate diversity. The multifaceted differences that exist among the peoples of Nigeria, as well as the gargantuan size of the country, made the choice of federalism a necessity. Nigeria’s founding fathers desired a political framework that would be able to “hold together” the diverse interests in the country.

The initial three-region federation that emerged in 1954 reflected the cultural, political, and economic differences among the three largest ethnic groups in the country—the Hausa-Fulani, Yoruba, and Igbo—which dominated the then Northern, Western, and Eastern Regions, respectively.

Although none of the regions were homogenous, this tripartite arrangement implicitly put the fate of the country in the hands of the three major ethnic groups. And the transformation of the hitherto unitary state into a federation gave rise to politics of suspicion and ruthless inter-ethnic competition for national resources among ethno-regional elites.

In 1963, three years after Nigeria gained independence, the federal system was altered when an additional region, the Midwestern, was created under the administration of Abubakar Tafawa Balewa. Then, in 1967, the prospect of a war for secession in the East gave rise to a further transformation. Just before the Biafran War broke out, the military government of General Yakubu Gowon replaced the four regions with twelve states. This effort was aimed at appeasing certain minorities by giving them some breathing space and access to the Nigerian state’s distributive system.

Similar exercises were also carried out by the military regime of Ibrahim Babangida in 1986 and 1991, and the last state-creation exercise was undertaken in 1996 by General Sani Abacha when Bayelsa state was carved out from Rivers State. These moves can be seen as an attempt to free minorities from the bondage of the majorities, at least at the state level; the establishment of Bayelsa State, for example, allowed the Ijaw ethnic group greater autonomy.

Another significant ethnic arithmetic devised by Nigeria’s ruling class to try to ensure the protection of all of the country’s ethnic groups—and, by extension, national cohesion—was the adoption of the “Federal Character” principle, entrenched in the 1979 Constitution and later reaffirmed in the 1999 Constitution. That tenet seeks to ensure that the composition of federal institutions reflects the diversity of the country, and that the composition of state institutions should reflect the diversity of those states.

Put simply, the Federal Character principle aims to prevent the domination of the federal government or any of its agencies by one or a few ethnic groups. There is no denying that this policy has generated as many questions as answers, but it has achieved its fundamental objective of ensuring that every state has a share of federal power in one form or another.

It would of course be foolish to think that federalism or the federal principle is a panacea for all of Nigeria’s diversity-related problems. However, as well as showing how adaptations to the federal system can rebalance inequalities, Nigeria’s political history also shows that the alternative to a unitary system is not feasible. The country’s brief experiment with a unitary system of government following the military coup in January 1966 proved disastrous, leading to the counter-coup of July 1966 and a three-year civil war from 1967 to 1970. Transforming Nigeria into a unitary state was arguably aimed at resolving inter-ethnic and other regional conflicts that characterized the politics of that era, but the Nigerian military—embroiled in the politics of ethnicity that had plagued the society—lacked the capacity to handle such a political transformation.

The primary goal of the Nigerian Federation has been to “hold together” the myriad ethnic groups that make up the Nigerian state. Put differently, federalism as a political system was adopted in Nigeria to deal with the problems associated with diversity.

There is no denying that the federal system has not been able to hold together the federal society without some acrimony. But it is fair to contend that the survival of the Federation is an overall success, despite its inherent centrifugal forces such as a high ethnic rivalry, religious differences, and abundant oil resources which could act as a catalyst for disintegration. The Nigerian state may be described as a dysfunctional federation in need of bold political reforms, but it is erroneous to suggest that federalism has completely failed in the country and should be jettisoned.

As Nigeria has done throughout its post-independence history, it should work out ways to improve upon the current federal system and redress imbalances. But in doing so, it ought to bear in mind that federalism is Nigeria’s best available option.

Dele Babalola is an Assistant Lecturer in the School of Politics and International Relations at the University of Kent at Canterbury. An earlier version of this article first appeared on Think Africa Press on April 1, 2014.