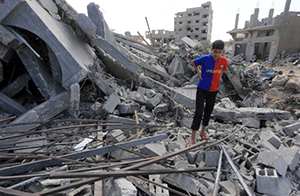 A Palestinian boy stands near a wreckage of a building destroyed by Israeli forces in Gaza City, Gaza,  August 19, 2014. (Mohammed Asad/Anadolu Agency/Getty Images)

The Israeli and Palestinian delegations are still meeting in Cairo (with the assistance of the Egyptian intermediaries), though it looks unlikely that the negotiators will be able to get agreement on even a few minimal demands in the immediate term. This will probably mean another ceasefire, buying them time to look for the breakthrough that could launch a stable and sustainable truce.

According to the European Union, the current situation and the tentative truce agreement in Cairo might not be enough to ensure a long-term ceasefire. At an urgent meeting held in Brussels on August 15, the EU Foreign Affairs Council released a joint statement in which all 28 foreign ministers agreed that the status quo in the Gaza Strip was “not an option.” Accordingly, they proposed that the Palestinian Authority (PA) and Egypt restore the European supervisory force that was positioned at the Rafah crossing point for almost two years, 2005-07.

In the meantime, international humanitarian organizations and international and local NGOs have begun their assessments of the devastation in the villages bordering the Gaza Strip, such as Beit Hanoun and Beit Lehia, and neighborhoods such as Shuja’ijeh in Gaza city and Kuzza’a in Khan Yunis, which were shelled during the ground component of Operation “Protective Edge.” Worst hit was the eastern part of Rafah, which was practically flattened to the ground on August 1 after two hours of continuous shelling by the Israeli Defense Forces (IDF) and massive bombing by Israeli Air Force fighter jets.

This third reconstruction of the Gaza Strip could cost up to US $6 billion, according to estimates by the Deputy Prime Minister and Minister of National Economy of the current Palestinian Unity Government, Dr. Mohammed Mustafa. Valerie Amos, UN Undersecretary-General for Humanitarian Affairs and Emergency Relief Coordinator, said it will take months to repair the United Nations infrastructure—97 UN facilities were affected by the war, among them three UNRWA schools that were lethally shelled by the IDF, and another three UNRWA schools that were used by the militias to hide explosives and projectiles—and a few years to reconstruct the whole Gaza Strip. A donors’ conference has been already announced for Cairo in mid-September under the auspices of the Ad-Hoc and Liaison Committee chaired by Norway.

The Palestinian demands at the negotiation table are recurrent, legitimate, and based on the concept of freedom. In the short-term, they include:

• Freedom of movement for passengers to be able to travel to Egypt through the Rafah crossing point, and from there to anywhere in the world;

• Freedom of movement for passengers to cross into Israel through Erez, and from there travel directly to the Allenby crossing point into Jordan, or to the West Bank;

• Freedom of movement for goods to be exported through the Rafah crossing into Egypt, and from there to any market in Europe or elsewhere;

• Freedom for fishermen to fish within a reasonable perimeter from the coastline (which should go gradually back to the 12 nautical miles that were established before);

• Freedom for farmers to grow crops and raise their cattle, sheep, and goats within the “buffer zones” adjacent to the perimeter fence that surrounds the Strip; and

• Freedom for the dozens of prisoners who were liberated after the Gilad Shalit deal in November 2011 and were re-arrested last July after three young Israelis were kidnapped and murdered by two Palestinian “lone wolves” who apparently acted on their own out of revenge, and not under orders of either Hamas nor any other militant organization.

The Israeli demands are also recurrent and legitimate, based on the concept of security. Israel, like any other democratic government, cannot allow a bunch of militias to launch rockets against its metropolitan areas and shoot mortars (which are even more dangerous as the “Iron Dome” anti-missile defense system can detect and intercept rockets but not mortars) against its cities, communities, and kibbutzim that border the Gaza Strip. Neither can it allow militias to dig tunnels underneath the security fence and penetrate Israeli territory to launch a terrorist attack or kidnap its nationals (as it happened with Shalit in June 2006).

Therefore, the Israeli government is asking for the complete “demilitarization” of the Gaza Strip, which would mean the disarmament not only of the Izz ad-Din al-Qassam Brigades—the military branch of Hamas and the most powerful of the militias—but also of every single militia, in addition to the deployment of the Palestinian Security Forces that are loyal to the PA. The Presidential Guard—trained and equipped in the West Bank under the supervision of the United States Security Coordinator, along with the National Security Forces—shall be stationed at the three border crossings and all along the Philadelphi Corridor (the border between Gaza and Egypt).

In the mid-term, if the disarmament, demobilization, and reintegration (DDR) of all militias in the Strip takes place gradually and successfully and, therefore (and this ought to be explicit in the truce agreement) Israel accepts the construction of a seaport and the reconstruction of the completely destroyed Yasser Arafat International Airport next to Rafah, both facilities should come under the control of the PA as well. Part of the truce agreement should also protect critical infrastructure facilities, such as the electric power plant located in Nuseirat and the various sewage system pumps that were recently shelled by the IDF, which should remain off limits to any new Israeli military operation in Gaza. The Palestinian people should not have its civilian infrastructure destroyed every time there are armed hostilities—otherwise, it becomes a means for collective punishment—and the international community should not have to pay over and over again to rebuild them.

Going Beyond “Quiet for Quiet”

For the new truce to work, the most important thing is to go beyond the previous paradigm of “quiet for quiet” that characterized the informal understandings reached after the two previous rounds of fighting. Operation “Cast Lead” ended in January 2009 without any formal agreement. And although “Pillar of Defense” ended with a sort of gentlemen’s agreement between the Israeli government and Hamas, the agreement was never signed nor ratified by the Knesset and the Palestinian Legislative Council, as it should have been.

Exactly the same political and diplomatic dysfunction happened with the Agreement on Movement and Access (AMA) and the subsequent Agreed Principles for Rafah Crossing (APRC) of November 15, 2005. Even though the “Disengagement Plan” from the Gaza Strip had taken place successfully, and the Israeli government took part in the negotiations of the AMA and of the APRC, it never signed them nor did it share them with the Knesset for ratification. This institutional deficit meant that as soon as the first suicide bombing took place at the end of December 2005, Israel unilaterally froze the AMA’s additional clauses (the export of goods through Rafah and the re-opening of the safe passage from the Gaza Strip to the West Bank), even though Fatah was still ruling the Strip (Hamas won the elections at the end of January 2006).

This recent experience shows that, besides the signing of a formal truce agreement by Israel, Egypt, and the PA, and the ratification by their respective parliaments, it is necessary to call upon the participation of a third party—be it the EU or the Quartet—to verify its implementation. The absence of a formal truce agreement in the next few days could immediately lead to a war of attrition between the IDF and Hamas. However, if understandings are indeed achieved at the negotiating table in Cairo, but the new truce agreement is not signed by the governments nor ratified by the Parliaments and verified by a third and strong party, it will just set the beginning of the countdown to a new Gaza war.