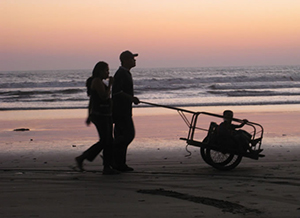 A family walks on Jiquilillo Beach at sunset, El Viejo, Nicaragua. Experts are asking why children from Nicaragua are not part of the recent surge in Central American children migrating to the United States. (ashabot/Flickr/2008)

The recent surge of children migrating from Central America to the United States has caused many to ask who or what is responsible. The vast majority of these children—78 percent, according to one figure from FY 2014—are from Guatemala, El Salvador, and Honduras, countries that make up what is sometimes called the Northern Triangle, and are places that are strikingly poor, unequal, and extremely violent.

Their closest neighbor to the south—Nicaragua—is even poorer, and yet its children are not part of this migration. Nicaragua has an annual GDP per capita of less than $2,000 USD, making it the poorest country in the Western hemisphere, except for Haiti. Further, this Central American country shares a turbulent history of long political conflicts, bloody civil war, recurring foreign occupations, and enduring corruption.

Yet Nicaragua has significantly less crime and violence than any other country in this region that stretches from the Rio Grande to the Amazon. Only Costa Rica, the longest continuous democracy in Latin America and the most developed country in Central America, has slightly lower rates of crime and violence.

How is this so? Several observers have contended that the stark differences in the levels of violence between the Northern Triangle and Nicaragua can be traced back to the dissimilar historic migration patterns in these countries. These flows started during the 1980s, as civil wars pushed Salvadoran and Guatemalan refugees to Southern California, while Nicaraguans fled to Costa Rica and South Florida.

Criminal gangs, such as the infamous Mara Salvatrucha, flourished in the Northern Triangle, the argument goes, because mass numbers of migrants who returned after being deported by the US destabilized those countries. Once in Central America, they took over the streets and, lacking in legitimate options for supporting themselves, opted for a life of crime and violence.

Conversely, according to this line of thought, Nicaragua dodged these effects because Nicaraguans received special treatment from the US. In the 1980s, the Reagan Administration had fought the Sandinista government and was sympathetic toward the Nicaraguan refugees flocking to Miami. In addition, most of the poor Nicaraguans who could not afford to travel to South Florida settled in Costa Rica, where they were safe from gangs.

Although circular migration-deportation patterns have certainly played a part in the development of gangs and the growth of violence in northern Central America, it is misleading to blame it all on migration. If we accept this argument as it is commonly presented, we could not explain why, after years of unrivaled deportation from the US, gangs formed by Mexican migrants were not able to gain a foothold in Mexico the way they did in northern Central America. Moreover, if the root of the problem is US-made gangs, we would have a hard time explaining why the Central American maras have not created the same havoc in the American cities where they roam.

The main reasons why Nicaragua has lower levels of violence while the Northern Triangle’s countries are collapsing under the siege of legions of criminal bands lie elsewhere. They have to do with the way Central American governments addressed and tackled the problems of citizen security when youth gangs, criminal organizations, and other violent actors started to emerge and spread across the region.

The best example of this is the implementation of the mano dura (iron fist) approach in northern Central America, versus the prevention-based approaches that prevailed in Nicaragua. While the countries of northern Central America enacted draconian anti-crime laws that unleashed massive crackdowns on their marginalized youth, Nicaragua decided to take community-based preventive approaches to control crime. Police institutions in Guatemala and Honduras let their oversight mechanisms and human rights units weaken in order to give them more leeway to tackle crime; in contrast, the Nicaraguan police invested their institutional energy in creating family and youth specialized units. While the Salvadoran government used its resources to arrest more than 30,000 youth and throw them into dilapidated prisons, the Nicaraguans used their police to promote and participate with community organizations.

In northern Central America, overcrowded prisons not only became national centers for criminal recruitment, they also turned into sites of massacres, inexplicable fires, and systemic abuse. As a result, gangs and other criminal groups grew stronger in prisons, where they developed more opportunities, contacts, and motivations to confront the authorities and go against anyone viewed as a collaborator of law-enforcement.

But these differences in institutional behavior between Nicaragua and the countries of the Northern Triangle are not merely a matter of policy choice. They are fundamentally a matter of how criminal justice institutions were reformed after the political transitions that ended the civil conflicts two decades ago. In northern Central America, those reforms failed to move the nascent security and justice institutions away from the maneuvers of corrupt politicians and stopped short of removing the old regimes’ abusive officials. Hence, brand-new institutions just changed their names and their uniforms without transforming their practices and, more importantly, some of their crooked leaders. As one Salvadoran gang member once told me in reference to the mano dura crackdowns:

“The police chase us the way they used to hunt guerrillas during the war, circling us up and shooting at us. But you know what? We are not guerrillas. We are homeboys, and we don’t care about people liking us. So if the police want war, they’ll have their war, because all we care about is revenge.”

Conversely, Nicaragua went through a different political process. There, security institutions emerged after a revolution wiped out the overseers of the old authoritarian regime and after the victorious revolutionaries ended up losing power in an electoral process. Those radical changes created new relationships between state institutions and the population, while at the same time they forced the political elites to “de-partisanize,” professionalize, and clean up the security institutions in order to make them reliable. Law-enforcement leaders understood that in order to survive, they had to work with the community and be efficient.

Such a process was largely absent in northern Central America, where the electoral success of political elites who had been in charge during the authoritarian era provided political cover to corrupt officials and their impunity.

This is not to give the impression that Nicaragua is a haven of peace and tranquility, unhampered by serious conflicts and corruption. In fact, there is very disturbing news recently of government maneuvers to manipulate and re-politicize the police. But in comparison with the nearly anarchical state of its northern neighbors, Nicaragua still feels like another world—one where regular people can still start a small business without the fear of being extorted by youth gangs, and unarmed licensed police officers can still ride public buses without the fear of being shot by a community member with a grudge.

Violence in Central America has more to do with poor governance—that is, draconian security policies, corrupt law-enforcement institutions, and entrenched impunity—than with migration and deportation. Political and criminal justice institutions are a key factor that can no longer be neglected if we are to explain the gap between Nicaragua and the rest. Unfortunately, the fixation on maras, drug trafficking, and migration have limited the most important discussion thus far.

José Miguel Cruz is the Director of Research at the Latin American and Caribbean Center and Visiting Assistant Professor in the Department of Politics and International Relations at Florida International University.