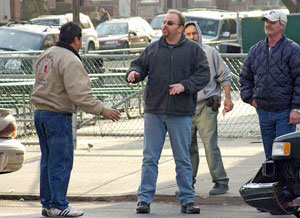 After a car accident, two men argue over who was at fault,  Brooklyn, New York. (Lou Bueno/Flickr)

“The most effective mediator is nearly invisible,” said Brad Heckman, CEO of the New York Peace Institute, one of the largest conflict resolution services in the United States. “In the context of international mediation, the mediator is at the table largely because of his or her cache, standing in the community, political capital,” Mr. Heckman explained in an interview. “What we teach is almost the polar opposite of that.”

After setting up mediation services in Eastern European countries emerging from societal upheaval and transitions to democracy, Mr. Heckman established the New York Peace Institute to resolve disputes between individuals in the city and address community-wide disturbances.

His work in New York involves people from a variety of ethnic groups, cultural orientations, and socioeconomic backgrounds, and Mr. Heckman sees numerous parallels in mediating local-level and international disputes: “There’s a finite set of human reactions to conflict, and the set of tools that we use are equally applicable, whether it’s a neighbor noise dispute or a multiparty dispute involving ethnic groups internationally.”

If talks are stalled, Mr. Heckman explained that silence can sometimes be the mediator’s best friend. “Eventually someone is going to say something, and it needn’t be the mediator. And that’s really an example of this being the parties’ process, honoring their self-determination.”

When mediators with international experience come to the New York Peace Institute for training, Mr. Heckman emphasizes humility: “As much as you may know about the parties, you probably know less than you think you know. So approach every dispute with a kind of beginner’s mind.”

“This really presents a paradox and a challenge,” Mr. Heckman said, “because very often when mediating complex disputes, whether locally or internationally, the onus is on us to know as much as we can about the parties—their language, backgrounds, orientation—and then be prepared to be surprised, be ready for people to break all of the stereotypes.”

What follows is an edited version of our conversation.

How did the New York Peace Institute get its name?

We actually got the name by crowdsourcing it. We put out a competition to our clients, our four hundred mediators and other stakeholders, and had them submit names to us and then using a staff consensus process, we arrived at New York Peace Institute.

And unbeknownst to us, the word “peace” was much more controversial than we thought it would be. There is a kind of an ambivalent relationship between community mediation work and the larger conception of what is peacebuilding. And I think therein lies one of the reasons that mediation is not the household word that it should be, nor is it the go-to way of resolving disputes. Too often, mediation is seen as some kind of clunky court apparatus, or, when it’s portrayed in the media, as a kind of touchy-feely quasi-therapeutic thing. It can be those, but it’s a lot more than that.

So, when I see the work that our mediators actually do, they are building peace one conflict at a time, and in our communities, they are helping prevent violence, they’re building community cohesion in amazing and creative ways.

But there’s a paradox in that: our clients come to us from all walks of life, with every kind of dispute you can imagine that takes place in New York City—which means every kind of dispute. They don’t come to us looking for peace; they come to us, quite often, really angry. They want their stuff back. They want an apology. They want money. So we walk this fine line between saying “yes, we are very actively building positive peace in our communities” while at the same time really honoring people’s rights to peacefully confront each other and their right to disagree and have conflicts.

How does the New York Peace Institute and your work bring those involved in a dispute into mediation?

That’s the hard part for sure. Very often, we have one party coming to us who wants mediation, and the other party may have no clue that there is even a conflict or an issue between them. There are a few things that we found are successful in engaging all parties, even in the most complex disputes.

One is appealing to their self-interest—what’s in it for them to come to the table? Typically, it’s not for that kumbaya moment of building the sense of brotherhood or sisterhood, although that very often is the result of mediation processes. But it really is letting the person know that they have an opportunity to sit down and have a difficult conversation in a safe space. For me, quite honestly, one of the best definitions of mediation is a safe space for a difficult conversation.

Also, letting them know that the way we practice mediation is free, it’s confidential, there is really nothing to lose but maybe an hour of time, and we’ll work around schedules to find a convenient time. And we tell people that if they still want to go to court, if they still want to pursue some other option, they are not relinquishing that by going to mediation. So the “you got nothing to lose” scenario is really one of the best ways we find to promote mediation to parties.

During the process, when the talks are stalled, what are mediators’ most powerful tools and tactics?

There are so many things we can do. One of our impulses very often as a mediator when there is an impasse between parties is, “Oh my God, we have to jump in there and do something.” Sometimes, quite honestly, doing nothing is the best thing you can do. So, we really train our mediators to use silence as their friend.

One of my favorite mediators is just masterful at this. I’ve seen her spend twenty seconds, thirty seconds, a minute just silently looking at each of the parties with this beautiful Zen-like demeanor, and eventually someone is going to say something, and it needn’t be the mediator. And that’s really an example of this being the parties’ process, honoring their self-determination. And sometimes, non-intervening is the best thing we can do.

Aside from that, there are a number of techniques that we can use, with which we need to be very careful because we always have to keep in mind that it’s not our job to push people towards an agreement or to manipulate the process, but to find ways to allow them to move things in the direction they want to move in. So the kind of questions that we ask is so important.

We have some techniques that we call “time travel” in mediation. We may ask parties in conflict: “What were things like before this conflict took place? Tell me more about your relationship.” This could be a really powerful question, because often in the midst of conflict, people only see that narrow slice of life in which they see this one-dimensional version of each other and not the full picture. So taking a moment to reflect on how things were before the conflict could very well open ever so slightly the doorway that will allow them to think, “Well, you know what, we have been able to communicate on a better level than we are now.” We can explore what that looks like.

You’ve worked in Eastern Europe, the Balkans, and other locations. What are some of the parallels and differences between community-level dispute resolution and mediation in international settings?

There are so many similarities between what happens at the local level and what can happen at the interstate level, or with complex international disputes. There’s a finite set of human reactions to conflict, and the set of tools that we use are equally applicable, whether it’s a neighbor noise dispute or a multiparty dispute involving ethnic groups internationally. And before founding the New York Peace Institute, I had the great honor of setting up mediation services in the regions that you mentioned, as well as the South Caucasus, the Baltics, and other countries that were emerging from incredible social change.

And in many ways, the New York Peace Institute is a kind of international development in reverse. I took some of the great ideas that I saw happening in these experiments with democracy and, in many ways, for lack of a better word, stole them and planted them here in New York City.

Many of the disputes that we resolve are between individual actors. Some of them are community-wide disturbances where we might have thirty or forty people in the room representing different ethnic groups, cultural orientations, backgrounds, ages, and so on—my background and graduate work in international relations really comes in handy. In fact, it reminds me of a fairly recent book written by Doug Noel, who is one of the founders of Mediators Beyond Borders, called Elusive Peace. One of the things he talks about is how international diplomacy would really benefit if diplomats were trained at the local level as community mediators in one of the 400 mediation centers that we have across the country here. So I think the crossover and the parallels are numerous.

On the other hand, many of our volunteer mediators are United Nations staff or diplomats. And I can say that what they bring to our communities in terms of their vast expertise and experience is also incredibly useful to our clients and our communities.

What would international and UN mediators learn if they went through a New York Peace Institute training?

Well, first of all, I’d probably learn more from them than they would learn from me. But one of the things that we talk about to people who come with great expertise is the role of humility in mediation—not to say that people we train aren’t humble in the first place, but very often in the context of international mediation, the mediator is at the table largely because of his or her cache, standing in the community, political capital, and subtle or unsubtle connection to some force behind them.

What we teach is almost the polar opposite of that. We say that the most effective mediator is nearly invisible. So, their ability to mediate, their ability to build trust is absolutely crucial, because they’re doing that without the benefit of having that standing. The takeaway from that for everyone we train who comes from an illustrious background is to check your ego at the door and really come from a place of humility. As much as you may know about the parties, you probably know less than you think you know. So approach every dispute with a kind of beginner’s mind.

This really presents a paradox and a challenge, because very often when mediating complex disputes, whether locally or internationally, the onus is on us to know as much as we can about the parties, their language, backgrounds, orientation, and then be prepared to be surprised—be ready for people to break all of the stereotypes that we come prepared to believe of folks. So those are some of the things that I find a lot of fun in imparting to people with tremendous expertise from the field.

Andrea Ó Súilleabháin is a Policy Analyst at the International Peace Institute.