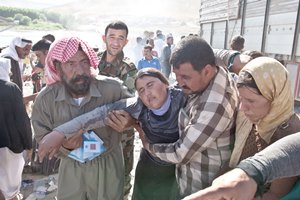 Men carry a Yazidi woman who fainted after crossing from Syria back into Iraq. (Sebastian Meyer/Corbis)

Since its emergence around April 2013 as a major player in Syria’s civil war, the radical jihadist group which calls itself the Islamic State (known as ISIS) established a formidable reputation for brutality, arbitrary killing, and mass atrocities. In Syria, the group used extreme violence against non-combatants as much as enemy fighters to impose its will. Intent on forcibly and quickly re-engineering society to fit its own ideological vision, ISIS employed massive violence and extreme brutality to cow dissent, enforce its rules, and eliminate potential opponents. In pursuit of its objectives, ISIS crucified, beheaded, stoned, shot, knifed, tortured, and bludgeoned thousands of Syrian non-combatants to death.

Past history teaches us that the road to genocide is paved with the ideological fervor of extremists bent on imposing their particular vision of utopia upon unsupportive populations. This week, many miles away from Syria, a court in Phnom Penh, Cambodia, found two elderly communist extremists–leading members of the Khmer Rouge–guilty of crimes against humanity that contributed to the destruction of a quarter of that country’s population in a little over three years. ISIS offers the Middle East a similarly destructive blend of unworldly ideology and massive doses of unbridled violence.

Earlier this year, ISIS launched an offensive into Iraq. Fearing the brutality of their opponents and unwilling to fight fellow Sunnis, Sunni elements of Iraq’s armed forces melted away. Unprepared to risk their lives for predominantly Sunni towns, the army’s Shiites also fled their posts. In a matter of weeks, ISIS occupied around one-third of Iraq and had taken its second city, Mosul, and other major towns such as Fallujah and Tikrit.

In its wake, ISIS ruthlessly imposed its vision of sharia law. It was not long before reports of mass atrocities emerged: Navi Pillay, UN High Commissioner for Human Rights, reported that the militants were seeking out and sometimes killing anyone associated with the government; ISIS publicized evidence of one mass atrocity, claiming it had slaughtered 1,700 prisoners; in Mosul, ISIS murdered the city’s religious leadership and established itself as the religious law. Throughout this time, it was reported that ISIS was forcibly converting civilians by threatening to impose a religious tax or execute those who did not. Some of those who did convert were immediately beheaded afterwards. Things came to a head in August, when ISIS closed in on Yazidis in northwestern Iraq. The jihadists threatened to kill those who refused to convert to Islam, causing a mass exodus. Perched precariously in the highlands of Sinjar, with no food or access to water, the Yazidis faced a serious humanitarian emergency at best–and potentially genocide.

It was in this context that US President Barack Obama authorized air strikes against ISIS positions and air drops of humanitarian aid to the Yazidis. Other countries have also joined the effort. Australia, for example, announced that it, too, would launch humanitarian operations. Although the decision to act was clearly influenced by strategic considerations, not least the developing ISIS threat to Erbil where the US maintained key installations and the group’s seizure of the Mosul dam, there can be no doubting that the administration acted, in part, to prevent genocide and mass atrocities. In announcing his decision, the president was very clear on this point:

“I’ve said before, the United States cannot and should not intervene every time there’s a crisis in the world. So let me be clear about why we must act, and act now. When we face a situation like we do on that mountain—with innocent people facing the prospect of violence on a horrific scale, when we have a mandate to help—in this case, a request from the Iraqi government—and when we have the unique capabilities to help avert a massacre, then I believe the United States of America cannot turn a blind eye. We can act, carefully and responsibly, to prevent a potential act of genocide. That’s what we’re doing on that mountain.”

There was clearly a need to use force to protect Iraqi civilians from ISIS. Obviously, the threat to the Yazidi was massive and imminent, but there remain hundreds of thousands of other Iraqis cowering behind ISIS lines, fearing for their lives. To the north, Kurdish forces are finding it difficult to prevent the extremists from seizing yet more land—and people. The use of air power to target ISIS positions, heavy weapons stores, and logistical chains offers significant support to the Iraqi government and creates a viable route toward creating a future opportunity to score a decisive blow against ISIS and wind back their advances. In the immediate term, the action promises to stem the tide of ISIS advances and give Baghdad the time it needs to establish an inclusive government representative of all Iraq’s peoples and marshal its forces to restore order. For these reasons, the president’s decision should be welcomed.

This US action to help protect Iraq’s civilians from ISIS sits squarely under pillar two of the Responsibility to Protect (R2P) principle, which relates to the international community’s responsibility to assist states to fulfill their responsibility to protect their populations from genocide, war crimes, ethnic cleansing, and crimes against humanity. The use of force comes in response to a specific request for assistance from a member state—helping a state fulfill its R2P (as mentioned in paragraph 138 of the 2005 World Summit Outcome on R2P) and assisting a state under stress (paragraph 139 of the same agreement).

Although “assistance” to the state is usually conceived in non-military terms, UN Secretary-General Ban Ki-moon explained clearly in his 2009 report on R2P that assistance could include the use of force with the consent of the state concerned. As the Secretary-General put it, “pillar two could also encompass military assistance to help beleaguered States deal with armed non-state actors threatening both the State and its population” (para. 29). Further, “…international military assistance may be the surest way to support the State in meeting its obligations relating to the responsibility to protect and, in extreme cases, to restore its effective sovereignty” (para. 43).

Over the coming days, the UN Security Council will consider adopting a range of measures to support the Iraqi government in its campaign against the extremists. Besides lending important diplomatic support to the effort, the Council should look to restrict the capacity of foreign fighters to join the fray, limit the access ISIS has to funds and resources, consider targeted sanctions against key individuals, step up the delivery of humanitarian aid, and consider how accountability for crimes against humanity committed by ISIS might be achieved.

Sometimes force is tragically necessary to protect populations from mass atrocities. The threat in Iraq is obvious and pressing, and the use of force against ISIS is the only feasible way of diminishing that threat in the near term.

But the use of force is never without its dangers. Some experts worry that this might be the start of a slippery slope back to full entanglement in Iraq. From this perspective, the use of force might save some Iraqis, but it would likely not serve US interests or wider regional stability well. By contrast, there are concerns that US strikes will not go far enough to degrade ISIS’ capabilities–especially given the group’s access to refuge, weapons, and ammunition in Syria, beyond the reach of the US.

Entanglement is best avoided by limiting operations to the air. That would seem to be a sensible limitation–and within the bounds of what the Iraqi government has asked for. However, the Obama administration will need to show the resolve needed to deal a significant blow against ISIS–even if that takes some time. The US and its allies will need to stay the course. The international community–through the UN Security Council–ought to offer the support they need.

An additional concern is that US strikes will succeed only in further uniting the Sunnis against the US, thus strengthening–not weakening–ISIS. Such fears are not well founded at present, owing to evidence that Sunni support for ISIS in Iraq is weak, and that most would choose Iraq over the militants should Baghdad form an inclusive and capable government. The organization’s weak support base is also exemplified by its reliance on foreign fighters. That might change, of course, if US strikes prove ineffective or–worse–if they cause civilian casualties. Finding the right balance between military effectiveness, force protection, and minimizing civilian losses will be absolutely critical.

The elephant in the room is Syria. ISIS thrived and grew in the maelstrom of Syria’s civil war and is one of the Assad regime’s principal opponents. Action against ISIS in Iraq will inevitably weaken the group in Syria and strengthen the regime in Damascus. But rather than viewing this as a problem to be managed, Western governments might instead see this as offering an important diplomatic opportunity. In the war against ISIS, the West can find genuine common interest with Russia–and, for that matter, so, too, can Damascus and the Free Syrian Army.

On that basis, new impetus might be brought to the search for a common international position on how Syria’s civil war should be resolved and common interests established between the Syrian government and the legitimate opposition. All parties can agree on their opposition to ISIS’ vision of the country’s future, yet the more divided they remain, the more likely it is that this vision will come to fruition. Therefore, along with military efforts to stem the tide in Iraq should come diplomatic efforts to isolate ISIS in Syria.

Alex J. Bellamy is Director of the Asia Pacific Centre for the Responsibility to Protect and a Non-Resident Senior Adviser at the International Peace Institute.