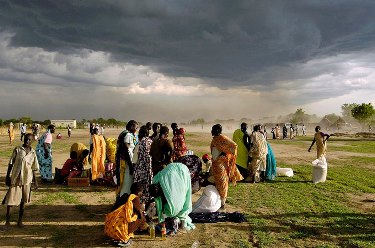 The humanitarian system is failing people in places affected by conflict, and the UN is “at the heart of the dysfunction.” These are some of the claims made by Sandrine Tiller and Sean Healy in their latest report for Médecins Sans Frontières (MSF), also known as Doctors Without Borders. The report, Where Is Everyone? Responding to Emergencies in the Most Difficult Places, offers a blunt critique of the humanitarian system today.

Ms. Tiller, a humanitarian adviser for MSF in the United Kingdom, spoke to me over the phone about her findings and addressed some of the criticisms that the report has received. What follows is an edited version of our conversation.

Sandrine, how are humanitarian organizations falling short, and who are they failing to reach?

[In the report,] we tried to give an overview of what our field teams are really seeing in the field at the moment. We think that there are some real problems in the way the system is working, but also in how NGOs have made choices. And as a result, the system has become quite biased towards what we call “easier projects,” projects that are closer to the capital, that are closer to the main road. In fact, they are failing to reach the most vulnerable—people who are really, I would say, off the radar.

To what extent are these challenges shaped by external constraints in these difficult emergency settings as opposed to shortcomings within these organizations?

We don’t deny that there are significant external constraints. In the Central African Republic at the moment, there are enormous challenges due to the operating environment, including fuel shortages, virtually non-existent road systems, and a failing local market. Those are just some examples. Nevertheless, we still believe that the choices that NGOs make in terms of how to prioritize their response and where they go have a bearing on the response.

How do the failures that you list in the report relate to the shift that some humanitarian organizations are making toward long-term assistance as opposed to crisis management?

We feel that there is a real danger in the push for integrating resilience-thinking into humanitarian action. This is a real trend we are seeing. And the worry we have about that is that it privileges the long-term thinking over short-term needs. Of course, both are needed—we’re not saying that the system should only focus on short-term needs. But it shouldn’t focus on long-term needs to the detriment of the short-term, immediate needs of the population.

You say in the report that the UN was “at the heart of the dysfunction” in each case that you studied. Why is that?

The UN sets up the architecture of the humanitarian system’s response in any emergency. So, of course, the way the response is structured is mainly due to the UN. And what we found is that there are several problems. One is how the UN funding relationships work with their implementing partners. We also looked at the issue of how the UN classifies people in need, so [internally displaced persons] versus host families versus refugees—and the way that that conditions the type of assistance that they get. Finally, we looked at some of the UN agencies that have a triple role: they are donors, coordinators, and implementers. And in a lot of cases, those roles really hinder good leadership and good decision-making.

Is there sometimes a conflict of interest there?

Of course. You know, in the case of Maban in South Sudan—one of our case studies—it was very important for UNHCR to show that everything was going fine because they were also looking for funding and their own appeal was quite underfunded. And for NGOs, there was also the disincentive to pass bad news up the chain because UNHCR was their donor. So those two roles really came into conflict.

And can we have both a greater UN presence in these more difficult places as well as a more nimble field response, as you seem to call for?

So, what we’re calling for is really for the humanitarian aid system to be more present in the hard-to-reach areas and to be more nimble. So this requires a greater number of aid actors who are willing to do risky programming and to go the extra mile.

And what about MSF itself? It’s not outside the humanitarian system that it criticizes, so is it really in a position to make these kinds of criticisms?

Well, we are part of the cartel. We are in the top five, so we consider ourselves part of the humanitarian system. Of course we are not part of the UN system, we don’t take funding from the UN, and we are not an implementing partner for UN agencies. So we have a kind of one-foot-in and one-foot-out approach. And I think that allows us the ability to be more critical and to voice what a lot of the field teams see. But a lot of the problems that we identified are actually problems for MSF as well.

In the report, you say that funding is not the main barrier to a better humanitarian response. But when it’s a $22 billion humanitarian industry up against a $1.5 trillion weapons industry, for example, does that really make sense?

Funding in the humanitarian sector is skewed. If you look at it comparatively, the numbers of people affected and the amount received in natural disasters far, far outweigh the amounts that the system receives in conflict. So, that’s one of the big biases. But we found that in some contexts, even classically underfunded contexts—South Sudan or the Central African Republic—there is funding available for work in conflict-affected areas, but agencies aren’t going there.

Does your report ignore the progress that has been made in the humanitarian landscape, as your critics argue? What about the success stories, such as the significant reduction of mortality among displaced populations in Darfur between 2004 and 2007, for example?

Well, certainly, many things have changed for the better. We don’t deny that. But what we’re really trying to focus on is the situation right now. And if you look at places like Chad, Cameroon, or Gambella in Ethiopia, where a lot of South Sudanese refugees are at the moment, there is a real dearth of humanitarian support, and mortality rates are sky high.

In light of all this, what priorities should humanitarian organizations be focusing on to improve their response, particularly in the lead-up to the World Humanitarian Summit taking place in 2016?

But I would say that the main thing we are asking for is that there is a kind of questioning of how the humanitarian aid system can improve its reach in those difficult areas, with populations that may be in urban areas, with refugees that aren’t registered, with IDPs who are in rural areas, and with people who are living in conflict-affected areas. Really, we feel that the system needs to adapt itself better to working in those kinds of contexts.