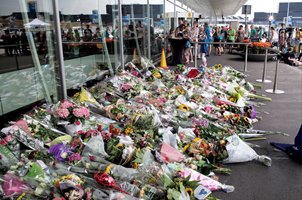 A makeshift memorial at Amsterdam Schiphol Airport for the victims of the Malaysian Airlines flight MH17, July 20, 2014. (Roman Boed/Flickr)

The horrific human tragedy of Malaysian Airlines Flight 17 (MH17), which was shot down over rebel-held territory in eastern Ukraine, risks to be remembered as the accelerator of today’s deteriorating geopolitical relations between Russia and the West.

All indicators point toward a renewed Cold War between the East and the West, where the new dividers are not the –isms of the past (Capitalism vs. Communism), but the economic and political interests of the present.

In fact, while some have suggested the MH17 tragedy is an opportunity for Russian President Vladimir Putin to cut his support to the rebel groups in east Ukraine, it is very unlikely. He still sees Russia’s influence over Ukraine and the prevention of it joining NATO as a national security interest. He still finds the global order that emerged from the end of the Cold War unacceptable, and will continue to undermine it. Other countries, including China, will ride with the tide.

During a BBC interview last week, I added my voice to those who think the MH17 tragedy is an “alarming escalation of the Ukraine conflict.” So far, the facts seem to go in this direction, with hostilities increasing on both sides. Ukrainian President Petro Poroshenko has immediately framed his enemies as terrorists, and nobody dares to contradict him, even while the Ukrainian army shells residential areas in Donetsk.

Russia says it supports a ceasefire, but Ukraine will not accept it, because it would leave the pro-Russian rebel groups in control of the territory and give them status as negotiating counterparts. A ceasefire would likely make east Ukraine another “frozen” conflict in which Russia is involved, such as the ongoing crises in Transnistria, Nagorno-Karabak, and Abkhazia and South Ossetia, where the status quo suits Russian interests, and where the West has no vital interest and thus won’t spend political and financial capital to solve them.

Economic sanctions seem to be the preferred weapon in the US and European Union. However, the West is divided. While the United States might be willing to push for more robust sanctions, in Europe, the hard realities of economic interests will likely prevail. France is concerned about its €1.2bn contract with Russia to sell it two Mistral-class helicopter assault ships. Germany remains the primary trade partner of Russia, and its chancellor, Angela Merkel, has already been urging restraint. The Netherlands, where the MH17 disaster claimed a greater percentage of its population than 9/11 did in the United States, remains the third largest trade partner of Russia.

Moreover, Europe’s reliance on Russian gas rules out the possibility of sanctions affecting the energy sector. The unfortunate reality is that, even if Europe is willing to spend the next winter in the cold, the Russian energy sector, as the world’s third-largest oil producer and a major exporter of natural gas, is too big to nail. A full Iran-style embargo on Russian energy exports will not be possible, and would not produce the same results. Both the US and Europe should urgently find alternative sources of energy for continental Europe, to make foreign policy less linked to energy security. The US should lift its outdated oil export ban, and Europe should move away from huge Soviet-era pipelines running east-to-west, and develop “southern energy corridors.” The recent deal between Europe and Azerbaijan aims to do precisely this.

At the same time, Russia’s economy is heavily dependent on gas revenue, and sanctions on the energy sector could do serious harm. In fact, Russia has already begun looking east for new clients. Moscow has just signed a natural gas deal with China, while Beijing will invest more than $20 billion to help develop energy infrastructure in Russia’s Far East, and it has exchanged billions of dollars in bank loans for long-term supplies of crude oil. China, as well as other BRICS partners—India, South Africa, and Brazil—have been very prudent in their statements regarding the MH17 disaster, further emphasizing the split between the West and these new emerging powers.

In reality, sanctions would escalate the intense anti-West propaganda in Russia and further intensify its mistrust of the West. Russia could retaliate by imposing visa bans and by taking the “battle” to other fields, such as the Word Trade Organization, or increasing support to Syrian President Bashar al-Assad, or weakening international pressure on Iran over a nuclear deal.

This is a very dangerous game. It will make the current imperfect global governance system even more ineffective, producing watered-down global public goods (or none at all), including in the areas of free trade, climate change, and economic development. It will reinforce the practice of sponsoring non-state groups in proxy wars that destabilize entire regions and yield misery for hundreds of thousands of civilians, as we see today in the Middle East. It will spread nationalistic propaganda, such as in Russia and China, or isolationism, such as in the United States and Europe.

In overheated moments, harsh words and accusations might help to carry the day, but they do not bring long-lasting solutions. A better strategy would be to push for an urgent political dialogue among the major powers, as my colleague Hardeep Singh Puri has suggested, and to find some sort of middle ground on issues “such as humanitarian access to war zones, limits on arms transfers to proxy forces, and mechanisms for defusing escalatory pressures,” as Richard Gowan has written recently. Today, the main risks to peace and prosperity lie in the uncontained spillover of crises from one region to another, as the MH17 has tragically reminded us, and from competing claims to spheres of influence.

Channels for diplomacy do exist, even in the current outdated global system. For example, the Organization for Security and Cooperation in Europe (OSCE), under Swiss Chairmanship, has developed a dialogue between its members, which include Russia. However, more diplomatic commitment from the main European capitals and Moscow is needed. It would be better for the West, before it loses more influence, and for the East, whose frail domestic economic contexts would benefit greatly from a peaceful and stable international environment. Unfortunately, today, this is the most unlikely scenario.