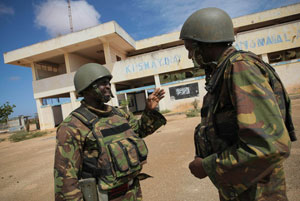 It has been almost three years since Kenyan troops were deployed in neighboring Somalia to create a security buffer zone on the Somali side of the border. The main aim at the time was to reduce growing insecurity in Kenya, which has affected the country’s economy—especially the tourism industry. Since the deployment and subsequent integration of Kenyan troops into the African Union Mission in Somalia (AMISOM), however, the goal of reducing insecurity is yet to be realized. Instead, the insecurity—which some attribute to the very presence of Kenyan troops in Somalia—has continued to rise.

The recent attacks on June 16 in Mpeketoni, Lamu County, Kenya, where more than 60 people died, are another reminder that terrorist incidents are increasing since Kenya’s deployment in Somalia. Despite the ongoing debate between government and opposition groups about the cause and perpetrators of the Mpeketoni attacks, Kenya’s presence in Somalia remains an important factor.

Even before the Mpeketoni attacks, the question of Kenya’s presence in Somalia has been firmly under discussion in many policy circles. Some opposition groups, including the Coalition for Reforms and Democracy (CORD) and its leader, Raila Odinga, reason that it is Kenya’s presence in Somalia that has brought insecurity to the country, and Kenya should therefore withdraw. According to this argument, radical Somali Islamists will have no reason to keep targeting Kenya once the country’s troops cease operations in Somalia.

Supporters of Kenya’s presence in Somalia, including Deputy President William Ruto, maintain that withdrawing would mean succumbing to the demands of the Islamist militant group al-Shabaab and expressly conceding defeat to terrorists. If Kenya’s presence in Somalia is as irrelevant as al-Shabaab would have the world believe, the group would have ignored their presence rather than insist on withdrawal.

This second school of thought believes that the KDF’s presence in Somalia has contributed to the strides made in the stabilization of Somalia and the successes of AMISOM; hence the pressure for them to withdraw. The country therefore finds itself in a Catch-22: to withdraw or not to withdraw, each of which has enormous implications for the security of Kenyans, as well as the future and stability of the country.

The position of the government of Kenya is unequivocally not to withdraw, at least for the foreseeable future. Apart from the combat fatalities that will come with the prolonged exposure of Kenyan troops to battlefield conditions, a no-withdrawal policy implies that insecurity might continue to rise, unless drastic measures are instituted to mitigate the threat of radical elements in the country.

Rising insecurity would, in turn, have disastrous repercussions on foreign direct investment, investor confidence, Kenya’s vibrant tourism sector, and the associated political costs and pressure from citizens. For instance,  the Mpeketoni attacks have already created political damage following the blame shifting between the government and opposition groups regarding who is responsible.

While opposition groups are trying to harvest political capital from these events, the government has also been quick to blame political rivals for fomenting trouble to make the country ungovernable, and paint President Uhuru Kenyatta’s administration as a failure in the eyes of citizens. At the heart of the blame shifting is the crumbling of unity of purpose and the politicization of efforts, with dire implications on domestic attempts to address insecurity.

Citizens are increasingly fed up with the rising insecurity without clear hopes or indications of improvements in the near future. While the Kenyatta administration grapples with the International Criminal Court question, the government’s worse nightmare will be to have a hugely disgruntled domestic constituency.

On the other hand, if Kenya were to succumb to the pressure to withdraw, this would come with costs. Apart from adding itself to the list of countries that have burned their fingers in Somalia, a knee-jerk withdrawal without a proper exit strategy would be problematic in a number of ways.

First, it would reinforce the belief among some Somalis that Kenya’s incursion was fueled by selfish interests, rather than wanting to assist in creating peace and stability for Somalia and the region at large. Second, it would imply a concession of defeat to al-Shabaab, and would thereby give the al-Qaeda-affiliated group a reason to cause greater havoc in countries that are currently on the frontlines in supporting peace in Somalia. Third, the suspicion that Kenya’s response was more of a rash response than a planned strategic move will be confirmed for the many who warned against the incursion.

Additionally, Kenya’s withdrawal from Somalia would have negative implications for the country’s strategic interests in the region and its efforts to position itself as an indispensable partner in the region’s security matrix. The country cannot afford to be absent in a context where Burundi and Uganda are clearly playing important roles in the quest for peace. Such an absence would directly erode its influence, soft power, and political clout in the contest for regional leadership.

If Kenya were to withdraw, it would not be the first country to have done so. American troops withdrew in 1993 after casualties, and Ethiopian troops withdrew in 2009. The aftermath of the 2009 Ethiopian withdrawal, however, created a security vacuum, which was readily exploited by al-Shabaab. A KDF withdrawal, unless immediately replaced with another capable actor in AMISOM’s sector II, would therefore similarly be an invitation for the return of al-Shabaab and the loss of liberated areas currently controlled by Kenya.

Moreover, Kenya seems to have crossed the Rubicon with its deployment in Somalia and certain choices in Kismayo, so even if the KDF were to withdraw, there is no proof that al-Shabaab would cease its fire against Kenya. There is every indication that the radicalization resulting from Kenya’s presence in Somalia will persist until contained.

The option of withdrawal is therefore not as easy as opposition groups make it appear,  yet no-withdrawal is not as cost-free and simple as pro-government advocates present it. Either way, Kenya’s best options for addressing rising insecurity depends on cultivating a unity of purpose among its political leadership and citizens in their commitment to the best national course, rather than parochial political and ethnic interests. Politicizing security issues, as happened after the Mpeketoni attacks, is counter-productive to collective action and political consensus-building for addressing insecurity.

It is also important that Kenya does not blame Somalia for all that happens on its territory. Despite al-Shabaab’s influence, it is debatable whether the group directly planned and executed all the attacks perpetrated in Kenya in their name. There is a case to be made about the challenge within Kenya itself.

Kenya’s greatest vulnerability to the rising insecurity is as much a problem with internal weaknesses as it is a matter of fault lines at the heart of the capacity of the state, social tension, and citizens’ disengagement from the state. The threat of al-Shabaab, in most cases, is mostly in its exploitation of these vulnerabilities that require urgent domestic attention.

Andrews Atta-Asamoah is a Senior Researcher in the Conflict Prevention and Risk Analysis Division at the Institute for Security Studies in Pretoria, South Africa. This article first appeared on ISS Today on June 23, 2014.