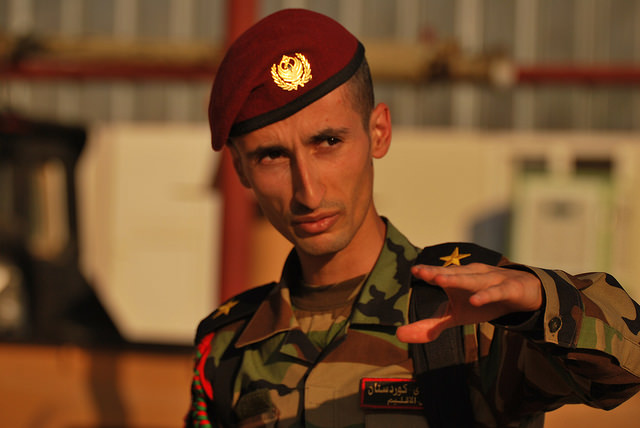 A member of the Kurdish Peshmerga near the Iraq-Syria border, June 22, 2014. (Enno Lenze/Flickr)

The sudden and sweeping advance of the Islamic State of Iraq and Syria (ISIS) and its recent announcement of an Islamic caliphate have thrown the entire Middle East region into a cloud of uncertainty. Images of ISIS forces dismantling the Sykes-Picot border posts between Syria and Iraq have cast an additional veil of doubt over prospects for long-term peace and stability. And while it remains unclear what the concrete consequences of the announcement of a caliphate will be, there are signs that ISIS’ actions are already contributing to a shift in the region’s dynamics.

How some of the key regional powers—Syria, Iran, Saudi Arabia, and Turkey—will react to the ISIS advance is tricky to predict. What is clear is that the four countries have substantial interests at stake, and ISIS’ recent gains are already pushing them to adjust accordingly, either to secure strategic gains or to avoid losing power and influence. Below are some possible implications.

An ISIS caliphate encompassing eastern Syria and western Iraq would not pose an immediate threat to the Assad regime. According to recent estimates, Assad’s forces can only claim control over the western coastal regions, the border with Lebanon, and the area around Damascus. East of that, the country is vulnerable to anarchy and chaos, as ISIS’ gains attest. In the short term, Assad is likely to gain more room to maneuver as ISIS forces redirect some of their focus and resources eastward to Iraq, and other rebel groups—the Free Syrian Army (FSA) in particular—consider whether and how to adjust their strategies to counter both the ISIS threat and the regime in Damascus.

Furthermore, with each atrocity that ISIS commits—such as the alleged massacre of Iraqi soldiers—the Assad regime makes political gains by branding this as part of the radical nature of the Syrian opposition. One concern for the Assad regime, however, might be the effect that ISIS’ expedition in Iraq might have on its branch within Syria. The group has accumulated a great deal of wealth and arms from Iraqi military bases and banks (almost $500 million in cash), not to mention the release of 2,500 fighters from local jails. It is even thought to be acquiring oil wealth in parts of eastern Syria and, in some cases, selling crude oil back to the government.  Given the new freedom of movement between the two countries, these developments could upset the balance in Syria, although there, ISIS still seems to be busy fighting the FSA for a full control of the eastern flank.

Iran, the Shia bastion of the Middle East, has been a staunch supporter of the Shiite government that came to power in the aftermath of the US invasion and is ostensibly doing everything it can to salvage the Nouri al-Maliki regime while trying to maintain its regional influence. It is providing advice, arms, and personnel—evidenced by the arrival of Iranian Revolutionary Guard officials in Baghdad over the weekend of June 13-15—and will put great effort into preserving its relationship with the government and containing the Sunni threat that ISIS represents. The political considerations are partly informed by the specter of the bloody Iraq-Iran war of the 1980s, a recurrence of which Iran would like to avoid at all costs.

There are also economic considerations. Iraq has become an important trade partner for Iran in recent years; a 167-mile pipeline was also due to open in the latter half of 2014, providing Iran with $3.7 billion in annual revenues.

From a regional standpoint, the so-called Shia crescent stretching from Iran to Lebanon through Iraq and Syria is now fragmenting, somehow blocking the easy-access corridor of arms supplies into Syria. The ISIS-controlled city of Mosul, for example, lies in the western province of Nineveh, most of which is also under ISIS control. The province shares a 300-mile border with Syria, so Iranian desires to counter the ISIS offensive are also motivated by a broader regional calculation to continue supporting the Assad regime and Shiite interests elsewhere. Yet Tehran will need to act with caution, lest it find itself overstretched in a multi-front war—in both Iraq and Syria—against Sunni groups.

As the Sunni epicenter of the region, Saudi Arabia is just as concerned by the recent tumult. While seeing a decline of Iranian—and ultimately Shia—influence in Iraq is in line with Saudi interests, the long-term scenarios could be more grim. Should the ISIS campaign continue to gain traction, the momentum could come back to haunt Saudi Arabia internally and cause trouble for the ruling royal family. Already, Saudi Arabia has deployed 30,000 troops to its border with Iraq after Iraqi soldiers withdrew from the area (the insurgency has now reached the Iraqi city of Ar-Rutba, just over 100 kilometers from Iraq’s border with Saudi Arabia). The broader irony here is the potential for Saudi-Iranian cooperation on security in Iraq, which would show that, given the tectonic nature of the geopolitical landscape, realpolitik prevails.

Already, the kingdom has become a recruitment ground for ISIS, as evidenced by the recent appearance of leaflets in Riyadh promoting the ISIS credo, and the fact that Twitter data suggest that there is substantial local support within the kingdom. Fingers have also been pointed at the government for turning a blind eye as individual funders backed the extremist Sunni group during the early days of the Syrian conflict. Saudi Arabia may thus have to deal with another blowback crisis, similar to the one experienced after mujahedeen fighters returned from Afghanistan and, quickly, turned against the monarchy. It comes as no surprise, therefore, that Saudi authorities recently issued a three-year travel ban and harsh fines on any citizens caught travelling to Iraq.

ISIS’ advance is also a top foreign policy preoccupation for Ankara. As soon as they captured Mosul, the militants seized the Turkish consulate in the city and the 49 diplomatic personnel in it. So far, nothing has been heard of the kidnapped officials, and the militant group has made no mention of their release. This comes in contrast to the fate met by the 32 Turkish truck drivers—captured in the same city—who were reportedly released last week. The fact that the group has released the latter before the diplomats is a sign of the value ISIS places in the Turkish officials. The significance of the diplomats’ capture—and of the entire Iraqi crisis, in both economic and strategic terms—for the Turkish government was also apparent when Turkish Foreign Minister Ahmet Davutoglu warned that if anything were to happen to Turkish citizens, Ankara “will retaliate.”

Perhaps the most important effect for Turkey is the crisis’ influence on the Kurdish question and Ankara’s stance on Kurdish independence. Iraq’s Kurdish region has seen less violence than the rest of the country, primarily because of a firmer response by the Kurdish peshmerga troops. But the President of the Kurdish Regional Government (KRG), Massoud Barzani, has seized the opportunity provided by the crisis and taken a series of steps that are bringing his region ever closer to formal independence.

Though US Secretary of State John Kerry visited Irbil on June 24 to urge Mr. Barzani not to seek independence, the fact that the top US diplomat is holding direct talks with the Kurdish leader is a signal that Kurdish aspirations may have receptive ears outside of the Kurdish region itself. Regardless, Mr. Barzani has ignored Mr. Kerry’s calls and started making plans for an independence referendum. It remains unclear whether the KRG will push through with its plans, but with its own Kurdish population in mind, Turkey will want to monitor developments next door and avoid getting left behind.

Huseiyn Celik, a top Erdogan official, recently signaled that Turkey would be ready to welcome an independent Kurdish state in northern Iraq when he said that if Iraq were to be divided, Turkey would welcome the Kurds as “our brothers.” His remarks came only a few days after the country’s ruling party, the AKP, sent a bill to Parliament requesting a grant of clemency for Kurdish militants. These developments may be the sign of a major change in Turkish policy with regard to the Kurdish question, and they signal Ankara’s realization that an independent Kurdistan, although not ideal, could serve as an important buffer zone against the threat posed by ISIS.

The advance by ISIS has caught much of the region—as well as Western policy circles—by surprise. Iraq’s inability to counter the threat has put into question Mr. Maliki’s authority and his ability to preserve a unified government in this moment of crisis. Indeed, there are signs that both Iran and the United States are rethinking their support for Mr. Maliki and looking for an alternative central authority in Baghdad.

Regardless of what happens to the Iraqi leadership, the key regional powers are likely to take their own measures in an effort to minimize the ISIS threat, at least in the short term, but with a potentially long-term effect. The group’s announcement of a caliphate may not signify a whole lot in practical terms, but it is a sign of ISIS’ wide ambitions, something the region is unlikely to ignore.