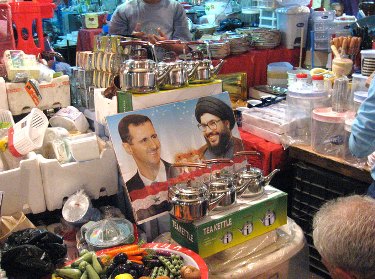 The Lebanese militant group Hezbollah has engaged in intense fighting on the Syria-Lebanon border in recent weeks, as violence increasingly threatens to spill into the group’s heartland in Lebanon’s northeastern Bekaa Valley. As the Shiite militia clashed with Syrian rebel forces, including the al-Nusra Front, reports also emerged suggesting that the nephew of Hezbollah leader Hassan Nasrallah had been killed during the clashes.

Despite its heavy involvement in a war that increasingly shows signs of violent spillover into Lebanon, Hezbollah has been able to retain a great deal of support from the Lebanese Shiite population, said Sahar Atrache, Lebanon analyst for the International Crisis Group, in a recent interview with the Global Observatory. Ms. Atrache, who is based in Beirut, indicated that the heavy casualties suffered by Lebanon’s Shiites because of the Syrian conflict have not altered the fact that Hezbollah is seen as “the protector of the community” against Sunni extremism.

Ms. Atrache also acknowledged that the party’s support for the Assad regime in Syria has estranged some of the group’s regional Sunni neighbors, with which Hezbollah had been able to build a “very good relationship.” But the party will be able to take significant risks in Syria and still keep the support of its base in Lebanon, she said.

The violent advance of the Islamic State of Iraq and Syria (ISIS)—the radical Sunni group that has sowed chaos and fear in neighboring Syria and Iraq—has raised the fear of an “ascending Sunni Islamism…where Shiites and minorities in general feel targeted.” That, coupled with the wave of suicide and car bombings against Shiites in Lebanon, may have strengthened, rather than weakened, Hezbollah’s support base.

“These attacks have pushed the community to close ranks behind the party,” Ms. Atrache said. Now, she added, Hezbollah is widely perceived to be the sole protector from this “existential threat.”

What follows is an edited and condensed version of our conversation.

It’s currently estimated that there are over 5,000 Hezbollah fighters in Syria supporting the Assad regime. What roles have they played, and how effective have they been?

Hezbollah is definitely deeply involved in Syria. There are conflicting figures when it comes to the numbers, and I frankly don’t have an answer to how many fighters from Hezbollah are currently in Syria. But what we know for sure is that Hezbollah is going all out not only to save but also extend the reach of the Syrian regime and make sure that any outcome to the current conflict will ensure its success and thus preserve, in a way, the interests of Hezbollah and Iran.

Has the conflict in Syria changed Hezbollah’s internal organization and its ambitions in the region?

Changes within Hezbollah started, I would say, with the Israeli withdrawal from Lebanon in 2000, and then to a larger degree with the 2005 assassination of Prime Minister Rafic Hariri. The Syrian conflict added another change, which is now relying much more on hard power. And in a way, Hezbollah is sacrificing a very good relationship that it had built through decades with the Sunni constituencies in the region, and it is creating a lot of enemies. Ironically, what Hezbollah is fighting for in Syria is jeopardizing some of its strategic interests, putting its relations with its neighbors in danger.

Within the Shiite constituency, I would say that there is definitely some dissent and criticism regarding Hezbollah’s military involvement in Syria. But overall, if we look at the general leaning of the community, the Shiite community has been largely supportive of Hezbollah. And this has many reasons, one of them being the feeling of fear from this ascending Sunni Islamism, the fear of these sectarian divisions, where Shiites and minorities in general feel targeted.

There is a feeling that Hezbollah is the protector of the community, and there is a fear that the community will lose some of its gains—the political and social gains it has made through the decades—were it to dissociate itself from Hezbollah. So, over all, the community has been supportive, although it has paid a heavy price for Hezbollah’s involvement.

How far can the group go in putting its resources and support at risk in Syria before it starts losing that crucial support from the Shiite population?

For this, we’ll need to wait and see. But I would say that most likely the party is willing to go very far because it cannot afford to go back now. It’s already involved deeply. Ironically, Lebanon witnessed a wave of suicide and car bombings targeting the Shiite constituency, Shiite neighborhoods, and assets of Hezbollah and Iran. But these attacks have pushed the community to close ranks behind the party; they didn’t turn it against the party. This is because it also fueled this feeling of an existential threat, the need for this protector. Until now, and given the heightened sectarian tensions and fault lines in the region, it is unlikely that the community will split from the party.

How do you think Hezbollah’s tactics are going to change with what we’re seeing in Iraq and Syria and with the recent announcement of an Islamic caliphate by the Islamic State of Iraq and Syria?

ISIS’ takeover of parts of Iraq is definitely problematic for the party. It could even jeopardize the supply lines, or the link I would say, between Iran, Syria, and Hezbollah. But I think that Hezbollah’s focus will stay on Syria. Hezbollah’s main concern is Syria because it is the direct neighbor and it is much more concerned with preserving its interests there and the regime. I think it is mainly Iran that will be playing a major role, if any, in Iraq, rather than Hezbollah.

How do you think ISIS’ advance will affect Iran in how it will keep in contact with Hezbollah?

Syria had already put a lot of strain on Iran, and now Iraq is putting even more strain. But frankly, even with all this strain, I don’t think that the Iranians will really change their strategies, whether toward Syria or toward Hezbollah.

Hezbollah is a very important proxy, but also I would say an ally, to Iran. For decades now, Hezbollah has allowed Iran to have a hand and an influence in Lebanon. It was also a door to Israel and it is its link to Syria. But over the years, Hezbollah has also grown more independent—though not financially. But the evolution of the party, how it fought against Israel, how it took over the politics in Lebanon—all this allowed it a lot of room to maneuver. And the party has proved repeatedly that it can be successful, whether against Israel or even in the Syrian conflict.

So I don’t think that the Iranians will jeopardize or even try to change the relation to Hezbollah because of what’s happening in Syria. Most probably, they’ll try to keep managing these different interests in the region.