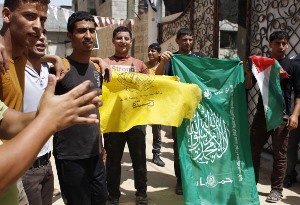 Palestinian protesters in May 2014 wave their national flag (R) alongside the flags of Fatah (yellow) and Hamas (green) in support of national reconciliation and the announcement of the formation of a national unity government. (SAID KHATIB/AFP/Getty Images)

After eight years, the conflict between the two Palestinian factions Fatah and Hamas, which effectively divided Gaza and the West Bank into two separate entities, came to an end after a surprise announcement of reconciliation in April 2014. The deal came at a time when the West Bank authorities faced a deadlock in the peace negotiations with Israel, and an almost-broke Hamas had lost most of its allies. Both parties needed to find a way to move forward.

The Islamic movement Hamas, with headquarters in Damascus under the protection of the Syrian leader Bashar al-Assad, fell from grace when they supported the opposition in the Syrian uprising. The collapse of the Arab Spring and the fall of the Muslim Brotherhood in Egypt further complicated the situation for Hamas in Gaza. The border and smuggling tunnels to Egypt were the lifeline of the Gaza regime, providing a supply of food, energy, and raw materials, circumventing the Israeli-imposed blockade on Gaza. Abdel Fattah al-Sisi, Egypt’s new president, closed this lifeline, putting the Hamas regime under severe pressure. With a deteriorating economy, and unable to pay public salaries, Hamas sought reconciliation with Fatah as a solution to the crisis. In this weak position, they were willing to adhere to nearly all the Fatah conditions.

Fatah, for their part, were facing a stalemate in the ongoing peace negotiations with Israel. They were repeatedly blamed for not having control over all Palestinian territories as long as Hamas ruled Gaza, and thus not representing the entire Palestinian population. Reconciliation with Hamas was important for them to improve their standing vis-à-vis Israel. Finding Hamas in such a weak position made it possible for Fatah to define the terms of the agreement. To gain international support for a technocrat unity government, it had to adhere to the principles put forward by the Quartet for a unity government in 2006. After Hamas’s victory in the legislative elections in 2006, the international community demanded that the Palestinian government renounce violence, recognize Israel, and accept negotiations as the only way to end the conflict. In 2014, Fatah and the Palestine Liberation Organization (PLO) emphasized these guiding principles for the new technocratic unity government, which led to an international breakthrough, accepting the government when both the US and the EU recognized it. The government is without members from both Fatah and Hamas, and has no political mandate. It is a caretaker government dealing only with administrative issues.

The Palestinian people have called for unity between the two factions for years. In 2008-10, the Fafo Foundation conducted interviews with Palestinian refugees in the West Bank, Gaza, Lebanon, and Jordan on attitudes toward the peace process and a two-state solution. The division between Fatah and Hamas was repeatedly brought up by the interviewees and viewed as shameful for the Palestinian people.

Hazem (30 years old), a refugee born in an Amman camp and educated as an industrial engineer, said, “I am against the conflict between Fatah and Hamas. It is breaking us down from the inside. It also creates a distance to people, and we cannot concentrate to unite our strength.” The general sense among the refugees we interviewed was that the conflict between Fatah and Hamas and the split between Gaza and the West Bank harmed the Palestinian people and its struggle for a national statehood. Further, it only benefitted the interests of Israel who could continue the occupation and highlight their lack of a real partner for peace that could represent all Palestinians. The reconciliation between the two factions is thus a welcomed development for most Palestinians.

Israel, on the other hand, has strongly voiced their opposition to Palestinian unity, claiming it to be an act of legitimizing Hamas, which they view as a terrorist organization aiming to extinguish Israel. Israel tried to gain international support against recognizing the new Palestinian technocrat government. The attempt failed, however, and can be seen as one of Israeli Prime Minister Benjamin Netanyahu’s chief diplomatic failures.

However, the kidnapping and killing of three Israeli settler youths contributed to giving diplomatic momentum back to Netanyahu. How could Fatah support unity with an organization that had once more proven its terrorist credentials? Hamas, of course, denied being behind the kidnapping, but it was clear that the Israeli government saw this as another opportunity to quell the technocratic unity government. Blaming Hamas for the kidnappings, Israel has raided West Bank villages and towns in its hunt for the perpetrators. They have arrested Hamas leaders, including elected members of the Legislative Council and former prisoners exchanged for the 2011 release of the kidnapped Israeli soldier Gilad Shalit. The Israeli army also demolished the homes of two young suspects in Hebron, despite later arresting another person for the kidnapping.

To complicate the situation further, three settler youths kidnapped and killed a young Palestinian boy in East Jerusalem. The horrific killing brought the Arab Israelis out in street protests for the first time in a decade. It also quelled much of the Palestinian opposition to the violent methods of Hamas and the other armed factions. For Hamas, although weak, it was hard to watch the hunt against their members in the West Bank and the killing of seven Hamas militants in Gaza, without any reaction. For the first time since the ceasefire brokered by Egypt in 2012, a massive rocket attack against Israel was launched from Gaza in response to what they saw as Israeli aggression.

Why would Hamas attack Israel when they know it will provoke even tougher retaliations? Would it not be better for the weakened movement to stay calm and hope that the reconciliation with Fatah could mend its wounds and help it gain strength? Apparently not; the recent attacks might even have been calculated by the Hamas movement. Although paying a heavy price by being under attack, it is exactly while being under severe attack that the movement has gained support on the ground in Gaza. Being seen as a defender of the powerless Palestinian people under brutal and violent occupation, the movement is bolstering its popularity. At the same time, Mahmoud Abbas, the Fatah leader, is being criticized for security cooperation with Israel and for facilitating the hunt for the culprits responsible for the killing of the three settler youths. In this context the “suicidal” attacks on Israel from Hamas in Gaza could be more than convulsions from a movement fighting for its existence. It could have been a calculated move from an organization in deep crisis, knowing that they previously have gained strength and support while under attack. If so, Israel’s reaction might be counterproductive and instead play directly into the hands of Hamas. Although Israel’s rationale might have been to strike a final blow to the weakened Islamist movement’s military capacity, the outcome might be the exact opposite.

While the world is waiting for an Israeli ground invasion in Gaza, efforts are also underway to negotiate a ceasefire. Egypt has again played an important role as a broker for a ceasefire supported by the Arab League. Israel accepted the terms for immediate ceasefire followed by negotiations to agree on the details, while Hamas claimed the proposal unacceptable. Egypt has now invited both Hamas and Israel to Egypt with hopes to broker a new agreement.

In the meantime, civilians in Gaza are paying the price. Israel has so far hit more than 1,750 targets in Gaza, and more than 200 are reported dead and 1,100 injured, according to Haaretz. According to UN estimates, nearly 80 percent of the casualties are civilians, including children. So far, Hamas and its allies have fired around 900 rockets against Israel, causing one Israeli death and increasing the number of injured.

The war is complicating the reconciliation process between Fatah and Hamas, but will it eventually destroy it? Both Fatah and Hamas leaders claim the opposite. So far the two parties are standing behind their decision, determined not to let anything split them again. The unity is a strategic decision for both parties, and it is the wish of the Palestinian people. Unity is needed to give legitimacy to any Palestinian government, whether it decides to pursue resistance against Israel, as Hamas wants, or it wants to continue negotiations with Israel, as Fatah wants. The unity agreement is vague and weak at the moment, with major disagreements between the two parties, but they see it as a start. In fact, they have only agreed to establish a technocratic government mainly mandated to prepare new elections within six months.

Few changes are seen on the ground, and although the Hamas Prime Minister of Gaza, Ismail Haniyeh, stepped down, Hamas is still de-facto ruling Gaza. Many questions are unresolved, which became particularly clear in early June 2014, with confrontations between Fatah and Hamas employees in Gaza over Fatah’s refusal to pay salaries to Hamas employees. In the end, the Gaza police responded by closing the banks, impeding both Fatah and Hamas customers in collecting their money.

Clarifications of many details in the reconciliation agreement will probably remain uncertain as long as the Palestinians are distracted by a new Gaza war. The real test of Palestinian reconciliation will be the elections, scheduled before the end of the year; will they be implemented according to the announced timeline, and will the results be honored by both factions in Gaza as well as the West Bank?