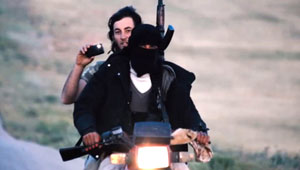 The militant group the Islamic State has used social media, videos, and pamphlets in its recruitment efforts. Above: a screenshot from one of their videos. (YouTube)

The extremist groups gaining ground in Iraq and Syria have benefited from the Arab Spring uprisings by reframing the aspirations and disappointments of marginalized youth to gain support, said Richard Barrett in this Q&A with the Global Observatory. Mr. Barrett helped establish the system-wide United Nations working group on terrorism known as the Counter Terrorism Implementation Task Force, and also served as coordinator of the UN’s al-Qaeda and Taliban Monitoring Team.

In this interview, Mr. Barrett noted the limited impact that the UN’s counterterrorism strategy has had in some countries but said that the strategy itself should not change. He also discussed the role of governments and the Islamic faith in sectarian violence.

Mr. Barrett, now Senior Vice President of the Soufan Group, was interviewed by Michael R. Snyder, research assistant with the Center for Peace Operations at the International Peace Institute.

Does the surge of extremist groups in Iraq and Syria that we’re seeing today point to a rise in violent extremism more broadly in the Middle East?

It does seem that the Middle East is becoming more extremist and indeed more violent. I think the limited success of popular protest in the Middle East over the last years has, in a way, encouraged people’s aspirations; obviously, their political aspirations. And there’s a feeling, therefore, that they can do more, get more authority, get more say in the way that their societies are run.

But most of the popular protests that emerged over the last years, apart possibly from Tunisia, have not turned out particularly well, and I think that has given rise to a greater sense that if you want change, you have to be fairly extreme, you have to really push for it. It’s no good just demonstrating in the street or scrawling graffiti on the wall. Governments are too strong to bend to that. So extremism is a conjunction I think of tactic—in that people believe you have to be extremist and really push hard to get change—and of popular appeal, because the popular opinion in the past was never something I think that any government in the Middle East had to worry about at all, and didn’t even think about it twice.

But now, popular opinion is a factor, and so you have the expectation of the mass of the people that they can affect change, but on the other hand, they can’t do without some form of extremist element leading them.

Could you go into more detail on some of the main drivers of the sectarian violence that we’re seeing in Iraq and Syria? You mentioned some of the political drivers.

I think no one would deny that there is an element of sectarianism within the Islamic faith, within the Muslim religion. But the exaggeration and use of sectarianism by political groups is something that we also ought to take into account.

Over hundreds of years, there have been caliphates, there have been communities practicing and developing their religions all over the Muslim world, and we haven’t seen a great deal of sectarian friction there. In fact, in most Muslim-majority countries, there has been a considerable amount of inter-marriage, of communities melding into one another. Tensions have risen for all the usual reasons about competition over resources, not necessarily competition over religion, though this has existed as an undercurrent.

But as an undercurrent, I think it can be brought up to the surface quite quickly when you have periods of social and economic tension, and one group or another wants to ensure that everybody takes sides.  So, if you’re a Sunni “sectarianist,” you would say, “Okay, this is about Shia. Our problems are all Shia,” and that sort of forces all Sunnis—and all Shia too, for that matter—to take a side. You can’t be neutral in that sort of situation. So it’s a very good way of escalating the dispute, and I think that that’s been one of the reasons why you’ve seen so much sectarianism emerge in Syria and in Iraq.

That’s a good example of a government using policies that are deepening the divide. Are some governments trying to quell this violence and fundamentalism that we’re seeing today?

I think you can look at that from a national point of view and a regional point of view. You have a failure of leadership when that leadership doesn’t present a national identity but presents a sectarian identity. And it may not be religious sectarian, but it’s just a sector of society, that these are the people who are favored by the government system, and these are the people who are not, and they are fairly separate.

Governments would be able to overcome that, I think, if they were able to tap into a much more national identity. But, of course, in the Middle East, that national identity isn’t terribly deeply founded. There are other issues which are more important to an individual than their nationality. So it’s difficult, perhaps, to rise above sectarianism to be a true leader of a country, even if people have the ability to do so.

What can Western governments and other governments do to help counter terrorism and violent extremism more effectively?

Many, many countries have these problems, and why do they have them? I think many countries find that a hard question to answer. They’re not sure why they have them, and therefore, they are not sure what to do about them. I think a lot of the violent extremism seems to be coming from communities who feel marginalized in some way, or maybe the individual members of the community who feel that they don’t have a stake in society, that they don’t really belong, they don’t have a sense of purpose or a projection into the future which is particularly bright.

So they are sort of operating at 50 percent, and young people particularly, they don’t want to operate at 50 percent, they want to operate at a 100 percent, or even 120 percent. So they are much more easily motivated to go and do something by somebody who comes up and says “You know what? You know why you’re suffering all this? It’s because of your government, because of your social system, because of your economic system, and educational system. You ought to come and join us, and we’re going to change all that, because we are going to operate on behalf of the community and these guys are just operating on their own self-interest, which excludes you by the way.”

So, I think that the appeal of violent extremists is very, very real because of this sense of “Yeah, I can get by and I can survive, but I can’t prosper. Whether it’s mentally, whether it’s culturally, emotionally, whether it’s economically, I just feel I’m held back.”

Dealing with that sort of thing is incredibly difficult, because on one scale, you have social programs, but social programs tend to be paternalistic, and they don’t necessarily offer people the opportunities they seek. They can be slightly resented as well, in that the community is only being helped because we ought to help this community or otherwise it might cause a problem for us, rather than that community being helped because it’s part of our broader community and our population. So governments have found it really, really hard, I think, to reach out to young people whose own communication exists in a bubble which really excludes outside voices, particularly voices from government. And the government also gets wrapped up in its own policies and strategies, which probably exclude the people they want to influence, so there’s no meeting of minds. There needs to be an understanding of how the other side works and a willingness to move forward and really get everybody together, even if it’s a painful process.

As we see the Islamic State gain power in Iraq and Syria, what can the UN do to respond to violent extremism there?

Well, the UN has certain potential advantages: its legitimacy, its credibility, its universality. But I say they are potential advantages, because they are not necessarily advantages which are being exercised, or understood to be advantages by the rest of the world. The UN is involved in so many different things, and the majority of people outside see the UN just as one body, and not as humanitarians, peacekeepers, feeders, people who look after refugees. They just see it all as one group. I think that the UN finds it very, very difficult to leverage its advantages in helping people understand that it’s out there as a representative of all peoples rather than out there as a representative of, say, the permanent members of the Security Council, divorcing its social activities from its political activities.

The [UN Counter-Terrorism Implementation] Task Force idea was to bring everybody together, and say “Look, everybody’s doing something that is effective or could be effective in counterterrorism, and if we all recognize that, and did it together, I think we would present and project a much more effective program than we do at the moment.” And the Task Force has been successful, I think, in bringing everybody together, but you can’t reconstruct a bureaucracy overnight. So everybody still operates in their own little bits under their own particular mandate. The Task Force is trying to let the UN really act as one—as the Secretary-General has said, “one UN”—and there should be one UN in the approach to terrorism, because terrorism is now a global issue.

How successful has the UN counterterrorism strategy, adopted in 2006, been in fighting violent extremism? Are the recent uprisings that we’re seeing in places like Syria and Iraq prompting a rethinking of the strategy?

No, not necessarily. Our strategy was developed by member states, of course, not by the UN Secretariat. It’s for member states to implement the strategy, and the Secretariat can only do so much to help them, maybe in capacity-building, or thought-leadership.

But the impact that the strategy has had on the spread of violent extremism is not terribly great at the moment, except in that it’s raised people’s awareness of why people become violent extremists, because the strategy’s Pillar I goes into quite a lot about the conditions conducive to the spread of terrorism. And when you look at the examples of these conditions in the strategy, it is things like governance, the failure to observe human rights law or universal values. These are fundamental, quite frankly. And when governments operate by the rule of law, when they provide all citizens with equal rights, then you find the levels of violent extremism are bound to go down—even if it’s only a question of raising awareness—before we start capacity-building and allowing states to implement [the strategy]. And that’s a success already.

So the strategy has made some progress, but now we’re almost ten years on from the adoption of the strategy—eight, anyway—and it’s maybe a little disappointing that in some states, it hasn’t been able to do more. But it’s very much, I think, a work in progress, and I think it’s moving forward.