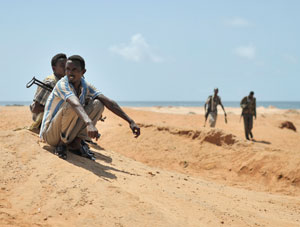 Can community policing deter terrorism in weak states where government security sectors are unable to cope with violent extremism? This is a question of mounting urgency in a number of countries beset by terrorist groups, including Iraq and Nigeria. It is of growing importance in both Somalia and Kenya, where the militant group al-Shabaab has regrouped over the past year and launched a series of devastating terrorist attacks that national law enforcement—as well as the multinational African Union (AU) peacekeeping mission in Somalia—have been unable to prevent.

In Somalia, the national police formed a community police program in June 2014, while in Kenya, calls are being made for Somali communities to self-police their neighborhoods against threats by al-Shabaab as an alternative to the heavy-handed Kenyan police crackdown on Somali neighborhoods.

The theory behind community policing is that effective neighborhood watch groups create a “non-permissive environment” for criminals and terrorists. Conventionally, community policing provides eyes and ears for law enforcement, reporting any suspicious movements or activities in their area. In cases where the local police force is too weak, corrupt, or infiltrated to be trusted, community policing can take on autonomous operational dimensions, in the form of local protection forces, ethnic militia, or even vigilantism. And, because security is a high-value commodity in weak states, community policing can also become a business, ranging from certified private security companies to protection rackets in which the line between security provider and security threat can get blurry.

While some variations of community policing may be illiberal and undesirable, in a context of protracted state failure they may constitute the only means residents have to protect themselves. For police in weak states, partnership with neighborhood watch groups is one of the few tools at their disposal to extend their capacity and build their legitimacy with the local population.

Community Policing in the Somali Context

In Somalia, citizens have had to provide security for themselves in the absence of a functional state for 24 years. Communities have generally done well on this count. Most of what constitutes community policing has revolved around clan obligations to defend members. In towns and cities, residents often cluster in neighborhoods based on clan or sub-clan identity, which affords residents protection and access to critical security information. All but the weakest clans have the ability to mobilize a clan militia at short notice, creating significant risks for armed intruders seeking to commit a crime.

In more cosmopolitan or mixed neighborhoods, neighbors know one another well and keep a sharp eye out for strangers posing a potential threat. Prior to 2006, Mogadishu featured neighborhood watch groups, composed of paid gunmen (some of whom were ex-militiamen themselves) who patrolled the streets. Though those formal neighborhood watch groups were dismantled by the Islamic Courts Union in 2006, the practice remains in place in some areas. Social capital and information sharing are key to community policing in the Somali context, and Somalis devote considerable energy to both.

In Kenya, the large Somali population (comprising both Somali Kenyan citizens and Somali refugees) lives in a state with an active police force, but one that has tended to prey on Somalis, extorting them for bribes rather than affording them protection. As a consequence, Somalis in Kenya have also formed a variety of self-protection units organized around a neighborhood or clan, rendering some of the Somali-inhabited neighborhoods among the safer parts of Nairobi, at least when it comes to street crime.

The 2014 Kenyan government crackdown on Somalis in the name of counterterrorism has badly strained Somali relations with the Kenyan security sector, making community policing in partnership with the police unlikely at present, but still of potential relevance down the road.

While tapping existing community policing mechanisms to thwart al-Shabaab makes good sense, the approach is likely to enjoy only modest success in Somalia and Kenya in the short term. For one thing, Somali community policing mechanisms are mainly designed to manage and prevent criminal violence, not terrorism. Al-Shabaab is a very different kind of security threat—one that is, for the moment, largely impervious to pressures from clan, business, and civic leaders. Second, al-Shabaab’s intelligence network, Amniyat, is very effective and deeply feared. Somalis in both Somalia and Kenya may know that al-Shabaab is operating in their neighborhood and often know the specific individuals, but fear assassination were they to report anything to the police. Third, clan loyalties work against communities turning in members of their own lineage, giving al-Shabaab important concessions within the clan. The group has consistently exploited clan obligations to protect its operatives and even facilitate terrorist attacks. Fourth, al-Shabaab’s infiltration into the Somali police force reduces local trust in any partnership with the police, and adds to the risk of retaliation against anyone engaging in community policing. In Kenya, community policing in partnership with the Kenyan police will be very limited until government ethnic profiling of Somalis ends and badly damaged relations are repaired.

Finally, despite the group’s declining fortunes and reputation in recent years, some Somalis continue to harbor residual support or sympathy for al-Shabaab and are therefore resistant to the idea that they should police their neighborhoods to keep al-Shabaab out. The extent of this passive support for al-Shabaab is very difficult to gauge, but cannot be entirely dismissed.

Despite these sobering short-term realities, in the longer term, some form of community policing is essential if Somalia and Kenya are to manage and contain al-Shabaab’s campaign of violence. Non-Somali security forces—the 22,000-person AU mission in Somalia (AMISOM) and the police force and army in Kenya—have limited capacity to manage the threat posed by al-Shabaab and risk driving Somalis into al-Shabaab’s arms with heavy-handed responses. For better or worse, al-Shabaab is for now mainly a Somali problem that only Somalis can address. Given the weakness and clannish nature of Somalia’s security sector, the burden of response will unavoidably fall on Somali society to police against al-Shabaab.  The enormous costs that al-Shabaab’s actions are imposing on Somali society may be a key factor in catalyzing a community response against the group.

Ken Menkhaus is a Professor of Political Science at Davidson College specializing in the politics of the Horn of Africa.