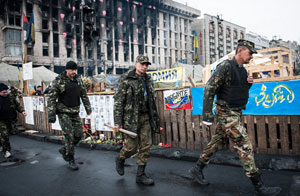 In the confused debate on Ukraine’s whirlwind of change since the fall of its pro-Russian president in February and Russia’s subsequent takeover of Crimea, one key question has often been lost sight of: what do Ukrainians really want?

One line of thinking portrays Ukraine as riven by ethnic cleavages–Bosnia on the Dnieper–and holds that people in eastern Ukraine might prefer Russian control to Kiev’s new authorities. This view was strengthened by pro-Russian crowds and armed men seizing government facilities in the east. Another has nervously regarded Russian troops on Ukraine’s eastern frontier and incoming Russian fighters, and sees Western economic or military assistance as the sole salvation of the hapless former Soviet republic.

Yet recent polls show these images don’t square with Ukrainian reality. While there are cultural and political differences between Ukraine’s regions, everywhere but in Crimea (which is now under Russian jurisdiction), most citizens feel strongly that they are Ukrainian. Indeed, the data reveal a surprisingly broad consensus on the recent revolution, relations with Russia, and even the bedrock of identity.

If these realities are ignored, policymakers in Washington and Moscow alike risk miscalculation. If Russian soldiers enter eastern Ukraine, they may face not flag-waving crowds, as in Crimea, but partisan resistance and Molotov cocktails. While sanctions, aid, and NATO actions all can help deter Russian adventurism in Ukraine, the greatest check it faces may be the force of Ukrainian public opinion.

Ukraine’s east–more Russian in language and Orthodox in religion–does differ somewhat in outlook from its west, which is more Ukrainian-speaking and Catholic. Unlike western Ukrainians, easterners voted for ex-president Viktor Yanukovych, and, like him, favored a customs union with Russia over European Union integration. They also suspected the protests leading to his ouster, mostly in the west, were fruits of American and European influence, polling by the Kiev International Institute of Sociology (KIIS) found. (The secession of Crimea does not affect Ukraine-wide polls much, because the region contains only 3% of Ukraine’s population.)

Yet far from mourning Yanukovych’s departure—or cheering Russian intervention thereafter—most eastern Ukrainians shared westerners’ reactions to these developments. A March poll by GfK Ukraine found two-thirds of easterners backed Yanukovych’s impeachment, after he fled from office and his massive corruption was revealed. It also reported that under one-fourth of easterners thought Russia’s annexation of Crimea was justified.

Ukrainians want an open-door policy towards Russia–but not a Russian takeover. Around two-thirds favor an open border with no visas, as between the US and Canada, according to a poll by KIIS in February. But the share who want their region to join Russia is a small minority even among easterners, as in the west, the Razumkov Center reported in December and the KIIS poll confirmed. Wherever they live, Ukrainians want to keep their sovereignty. “The population of Ukraine clearly has no great desire that Ukraine should be part of Russia,” says KIIS CEO Vladimir Paniotto.

They also reject splitting Ukraine into a federation, which Moscow has demanded with a view to turning the east into a Russian protectorate, and oppose taking control of government offices to support the demand. A federal state is backed by just 22% in the east and 12% in the west, the Razumkov poll found, and a study by the SOCIS market research agency in May reported an equally strong rejection of the federal scheme. In April, three-fourths of easterners rejected the seizure of administrative buildings in their regions by pro-Russian forces, a KIIS poll noted.

In fact, rather than enticing Ukrainians into the arms of Mother Russia, Russian president Vladimir Putin’s maneuvers have repelled them. A year ago, the Pew Center found the majority of Ukrainians (56%) viewed him favorably; by this April, a new Pew study reported, just 22% did.

On the core issue of national identity, Razumkov showed in January 2013 that substantial majorities of residents in almost all regions saw Ukraine as their homeland—the only exception was Crimea. Even larger proportions called themselves Ukrainian patriots, 88% in the east, 99% in the west, in Razumkov’s December survey.

Of course, significant regional differences remain. Easterners are suspicious of all Ukrainian politicians, today’s western-based revolutionaries, and yesterday’s graft-ridden rulers from the east, Gfk found in February. The Pew poll found a split between east and west on whether Russian should retain official language status, which Ukrainian nationalists in the new regime foolishly threatened in their first heady days in power. And the eastern separatists rampaging in Donetsk and Luhansk largely prevented the May 25 presidential election in the two regions, with 12% of the country’s population.

But despite their differences, Ukrainians country-wide value their independence, as the polls reveal. The massive majority vote in Ukraine on May 25 for incoming President Petro Poroshenko, committed to European integration while smoothing ties with Russia, confirmed this. Ukrainians think Russia is a nice place to visit—but they wouldn’t want to live there.

Craig Charney is a non-resident Senior Adviser at the International Peace Institute.