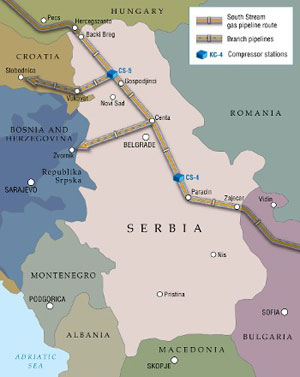 The Serbian section of the Russian gas company Gazprom’s South Stream pipeline, as shown in a November 2013 drawing from the company. (Gazprom)

Empires never go away completely, even after power shifts from one hegemon to another. However, with the fall of the Iron Curtain in 1989, few social scientists would have predicted that Russia’s diplomatic influence would ever manage to reassert itself in any of the countries of Eastern Europe. Indeed, over the last decade, as NATO and the European Union have crept further eastward, Russia’s foreign political clout seems to have forever disappeared from countries in which the Soviets had once so robustly intervened or nearly intervened: Poland, Hungary, the Czech Republic, and Slovakia.

One Eastern European country, however, has not only maintained its ties to Russia, but has significantly deepened its relationship across multiple domains: Serbia. Once the pillar constituent republic of Josip Broz Tito’s unifying South Slavic project (the “second Yugoslavia”), Serbia, unlike any other country, has positioned itself as Russia’s closest European ally. But this friendship may be tested and grow more complex as the crisis in Ukraine continues to spiral out of control. At a minimum, the ethnic conflict in eastern Ukraine bares some similarities to the Yugoslav conflict of the 1990s.

In light of its deep ties to Russia and its aspirations of membership in the European Union, Serbia’s situation merits attention beyond the wider US-EU-Russia debate, especially as the country navigates its way between the pressures of Brussels and its historical friendship with Moscow.

For many of the Serbs that I have spoken to for this piece, the situation in Ukraine has hauntingly reawakened the ghosts of Yugoslavia’s hyper-nationalist period of early 1990s and the violent “unmixing” process that started in Croatia and Bosnia and later ended with NATO’s controversial humanitarian intervention in Kosovo in 1999. First, while Ukraine’s political-linguistic identity markers are much more complex than the religio-cultural Serb-Croat divide, which Titoist Yugoslavia actively tried to bridge through its popular celebrations of “bratstvo i jedinstvo” or “brotherhood and unity,” current Serbian sympathies for Orthodox, ethnic Russians in eastern Ukraine are, in part, linked to the negative experience of the once sizeable ethnic Serbian minorities that were located outside of Serbia proper at the outset of the recent Yugoslav conflict. This reminder is further enhanced by the strikingly similar development of Russian nationalist expression stoked by an alarmingly rapid upsurge in Ukrainian quasi-fascist political parties (such as Pravvy Sektor and Swoboda) and their affiliated militias, who have provoked violence in parts of eastern Ukraine.

Yugoslavia’s irreversible unraveling was brought about by a similar deadly concoction of ideologies. While it has largely purged itself of such elements, Croatia’s center-right, Christian conservative HDZ party under President Franjo Tudjman once regularly flirted with neo-fascist rhetoric, publicly rehabilitated Croatian “Ustaši” fascists from the Second World War, courted and gained support from extreme conservative factions of Croatian Catholic Church and undertook measures to historically, culturally and linguistically distance itself from all things Yugoslav and Serb. Similar to the current Ukrainian nationalist debate, Croatia defined itself not as an Eastern European nation, but rather as a member of a Catholic Central Europe and a bulwark against a dysfunctional Balkan East. Croatia’s nationalist project, as Gellner presciently noted in his seminal Nations and Nationalism, instrumentalized its past to construct a new independent, post-Yugoslav identity based on perceived past injustices executed by larger regional players—Austro-Hungary, Italy and Soviet-supported, “Serb-dominated” Yugoslavia.

In turn, the rise of Croatian fascist expression in the late 1980s coincided and further inflamed nascent Serb nationalist expression, often expressed in terms of victimization by some predominant “other”–whether the Slovene-Croat Tito, Muslim Bosnians, Muslim Albanians, or Catholic Croats. Oddly similar to the Croat Tudjman, Slobodan Milošević, also with support from the church, manipulated historical myths and deep-seated fears so as to solidify his base. As the wave of the first multi-party elections and declarations of independence engulfed Yugoslavia in the spring and summer of 1991, nationalist Serbs, like their Russian counterparts today, called for the robust protection of their co-ethnic minorities living outside Serbia’s borders under potentially hostile regimes, where ethnic, cultural, religious, and linguistic rights would not be constitutionally bound, much less upheld. Hence, armed ethnic Serb separatists in parts of Croatia’s eastern Slavonia, with the aid of paramilitary groups from Serbia proper, justified their actions in the name of both real and perceived threats on the part of Croats. Both nationalisms fed off one another, polarized two otherwise (with the exception of religion) nearly identical peoples and plummeted a country into fratricidal conflict. Indeed, the similarities with Ukraine are striking.

The Serbian Dilemma: Europe, Russia, or Both?

The most marked characteristic of Serbia’s foreign policy posture of the past decade has been its tightrope walk between Brussels and Moscow. Throughout the 1990s, the United States and its European allies had instituted a robust sanctions regime against Serbia, ranging from travel bans to crippling economic, financial, and trade sanctions, all of which propelled the country into economic free fall and black marketeering. With few exceptions, Russia, in its own attempts to stay an active player in European affairs, actively criticized sanctions against its embattled Slavic brother at the United Nations and other international bodies. Moreover, Moscow vehemently opposed NATO’s intervention in Kosovo as a dangerous precedent for violated state sovereignty based on humanitarian concerns. Russia’s diplomatic support later opened up greater business access to the Serbian market.

Russian petroleum interests in Serbia are of extreme significance and they outweigh its closest competitors. In 2008, Russian Gazprom became a majority owner of Serbia’s national petroleum company, NIS, which, in turn, gave Russian natural gas and petroleum interests a strong foothold in the highly energy-dependent Balkan market. Aside from Gazprom’s expanding commercial network in Bosnia, Romania, and Bulgaria, Serbia will become the leading arm of the South Stream pipeline project. In the face of growing instability in Ukraine, which has been the traditional route of Russian gas and oil transport to Europe, South Stream envisions shifting Russian natural gas supply lines though the Black Sea, then across Bulgaria, Serbia, and Hungary into the lucrative Western European markets. Austria, Italy, and Germany top the list of energy-hungry buyers in the EU, all of which have adopted less fiery language on Russia’s recent behavior.

A parallel development emerged as Russian diplomatic and business interests solidified in Serbia: the hopes of EU membership. Milošević’s dramatic departure in 2000 led to a profound reshuffling in Serbia’s party political landscape, which included a greater number of stakeholders that embraced a EU perspective. Despite Kosovo’s unilateral declaration of independence in 2008, all current major political actors, nationalists alike, agree that Serbia’s future lies in the Union. In 2010, Brussels ratified Serbia’s first-step to EU membership, the Stabilization and Association Process (SAA), culminating in the official start of membership negotiations at the beginning of 2014. Recent elections in March, which brought into power a center-right government under the once nationalist Aleksandar Vučić and his Serbian Progressive Party (SNP), saw a further strengthening in pro-EU campaign rhetoric from all candidates.

As the EU and the United States have imposed economic sanctions against Russia, Serbia is placed in an increasingly difficult position. Should Belgrade refuse to support sanctions against Russia and thereby jeopardize accession into the EU? Or should it hitch itself to EU foreign policy as other countries from the region have? At the moment, Vučić, when not quiet on the issue of Russian sanctions, has called for the European Union and the United States to graciously respect its traditional ties with Russia. Russia, for its part, hasn’t indicated to Serbia what penalties it could incur should it defect from Moscow’s economic and diplomatic partnership. Belgrade has cited its own experience at the hands of crippling sanctions, which wreaked more havoc on the wider populace than on removing the Milošević regime. It is still very much early days in Serbia’s EU accession process and, as a result, Brussels is less bothered by Serbia’s respect for its own foreign policy constraints.

But, does a Serbia as a member of the European Union necessarily threaten Russian interests? Does Belgrade need to decide one way or the other? Quite the opposite—Russia could gain a key inside player in Brussels, something it does not currently have, except for some nominal support from Cyprus. With Serbia as a diplomatic conduit, Russia could project more influence on European foreign policy. For example, it could have its concerns over the possibility of EU expansion to Ukraine or Georgia articulated by an agent that “speaks the language of Brussels.” Moreover, Serbia could vice versa benefit Brussels by having a partner that enjoys privileged access to the Duma.

The crisis in Ukraine has exposed the fact that, after twenty years of independence, Kiev is becoming an increasingly hostile and unstable partner for Russia’s petroleum transport interests. Hence, circumnavigating political unrest in Ukraine via the Balkans with a key route through Serbia not only strengthens Belgrade’s geo-strategic position, it deepens the necessity for both to cooperate; EU membership may be the larger tradeoff on the horizon, but it doesn’t have to be.