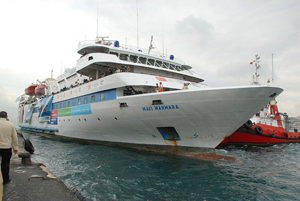 The Mavi Marmara set sail from Antalya, Turkey, in May 2010 in an attempt to break Israel’s naval blockade against Gaza; the incident resulted in 9 deaths and created a rift between Turkey and Israel. (Wikipedia)

Earlier this month, about 3,000 people marched through the streets of Istanbul in memory of the eight Turkish citizens and one Turkish-American killed by Israeli Defense Forces when the Mavi Marmara ship, known as the Gaza Freedom Flotilla, tried to break through Israel’s naval blockade of the Gaza Strip in May 2010. The incident marked a nadir in Israel and Turkey’s strained relationship in recent years, and neither country’s ambassador has since returned to his former post.

Four years later, a possible reconciliation agreement between these former allies has fueled speculation of a normalization of relations between the two countries. The agreement would entail reparations for the Mavi Marmara victims’ families; a mechanism to rescind all legal claims against Israeli Defense Force officers implicated in the attack; and approval to facilitate Turkish civilian aid to the Gaza Strip. While the proposed agreement does not fully satisfy all of Turkey’s outstanding demands following the incident—an Israeli apology, compensation for the families of those killed on the Mavi Marmara, and a lifting of the Israeli blockade on Gaza—it gets close. During a visit with US President Barack Obama in March 2013, Israeli Prime Minister Benjamin Netanyahu called Turkish Prime Minister Recep Tayyip Erdogan and offered his apologies. Details of payment of compensation are being worked out, as stated by Turkey’s Foreign Minister Ahmet Davutoglu, and while the blockade has not been lifted (nor is this likely anytime soon), Israel and Turkey have agreed to its easing by which Turkey would be allowed special status to deliver humanitarian assistance.

This small bit of momentum has prompted analysts to ask what may be driving this rapprochement and what may deter its realization. A multitude of factors play into this equation, but economic and security concerns seem to be at the fore. The discovery of underwater gas fields off the coast of Israel, and collaboration on the construction of a shared pipeline that would bring unprocessed natural gas from the Leviathan gas fields to the shores of Turkey and then on to Europe, are seen as an incentive. If Israel’s gas flows into Turkey, “the Trans-Anatolia Pipeline and Trans-Adriatic pipeline [projects] that take Azeri gas to Europe would provide key infrastructure that would be relatively easy for Israel to tap into,” said Ross Wilson, former US ambassador to Turkey and now at the Atlantic Council, in a recent interview.

Turkey’s energy needs are growing, and both the government and the private sector are invested in the country’s role as an energy conduit to Europe. The development of such a pipeline would add diversity of supply and royalty advantages to a country now dependent on Azerbaijani, Iraqi-Kurd, Iranian, and Russian energy. Turkey’s energy import costs accounted for the overwhelming majority of Turkey’s account deficit in 2012. And while alternative export options exist for Israel that would not entail collaboration with a government that outwardly supports Hamas, a pipeline through Turkey would nevertheless be the most direct means to Europe.

Yet, practical as well as ideological challenges to a shared pipeline are significant. For starters, the underwater pipeline would most likely have to travel through Cypriot waters, due to instability in Syria and Lebanon, thereby requiring some kind of agreement on the Cyprus issue. Add to this complications arising from Cyprus’ recent posturing to Egypt as a possible gas field development partner, and waters become harder to navigate. Furthermore, start-up costs for a shared pipeline would be high, the actual level of gas reserves remains unclear, and, as Dan Arbell, a Senior Fellow with the Saban Center for Middle East Policy at the Brookings Institution, confirmed, Israel may not be interested in any sort of energy collaboration with Turkey until ties have politically normalized, even if a pipeline between the two countries would make the most sense economically. “If you lay an undersea pipeline to Turkey and from there to Europe, banking on most of your exports going through Turkey, you have to make sure that relations are smoother than they are now.” Mr. Arbell went on to note that Israel had learned a lesson in dependence from its past experience with gas pipelines from Egypt, which at times were sabotaged or just didn’t work.

In addition to the energy issue, heightened regional instability stemming from the four-year Syrian civil war and its spillover into neighboring countries has put into sharp focus the war’s threats to each country’s national interests, potentially spurring a resumption of cooperation on security matters, largely severed following the Mavi Marmara incident. Israel and Turkey share serious concern about al-Assad’s chemical and conventional weapons ending up in the hands of Hezbollah or jihadist groups, particularly those along the borders of Turkey and Israel, and Iran’s involvement in the Syrian war. In an apparent demonstration of thaw in the relationship, in February 2013, Israel completed the delivery of an airborne reconnaissance system to Turkey—a transaction that had been suspended following the 2010 incident. A reconciliation agreement would reopen Turkish airspace to Israeli aircraft conducting long-distance flight training.

While Israel-Turkey collaboration on military matters and intelligence sharing is highly unlikely to go back to the way it was in the 1990s, the realities of the Syrian war may be pushing Israel and Turkey closer together, with Turkey now potentially more apt to reaffirm its NATO commitment. Former US Ambassador Wilson said that as matters continue to heat up between Syria, Iran, and Iraq—all seen by Turkey as dangerous places with problems that threaten Turkey’s international and national security—“Turkish authorities have tacked back to a closer relationship with the United States.” Mr. Wilson also noted Israel’s desires to ease its extreme isolation regionally, and that, despite Israel and Turkey’s current standing, Turkey is nevertheless one of the friendliest neighbors that Israel has.

Under the best of circumstances, collaboration between Turkey and Israel will remain deeply fraught with both internal and foreign political contention, backlit by a strained recent past. Mr. Wilson noted the Mavi Marmara incident did not happen in isolation, but followed a recent history of steady deterioration of the relationship, “narrowing the space in which both governments could operate or chose to operate with one another.” Tensions were not helped by an Istanbul court’s issuance in May of international arrest warrants for those Israeli officers involved in the Mavi Marmara incident—in apparent contradiction of the reconciliation agreement’s stipulation.

Added to the mix are developments related to the new Palestinian unity government—to which Israel responded with the announcement of 1,460 tenders for homes in Jewish settlements in the West Bank—and questions surrounding Turkey’s ultimate aspirations to play a larger role in regional politics, even a Middle East peace process. Internally, domestic politics may also factor into the normalization process, but at least in Turkey, the leadership of the Justice and Development Party (the party of both the Prime Minister and the President) may be reticent to act in any way that might upset its popular base in the lead up to August’s presidential elections.

The recent kidnappings of Turkish truck drivers, consular staff, and soliders by ISIS militants in Iraq speaks to the complexity of security problems that could affect this issue. With growing concerns for greater regional stability and needs for better energy prospects, along with an interest in maintaining trade relations (2012 bilateral trade is over $4 billion), Israel and Turkey may find it in their mutual interests to move beyond distrust and wars of words. According to Mr. Arbell, of all the factors at play in the normalization of ties between Israel and Turkey, the Syrian crisis, natural gas, and Turkey’s domestic politics are at the fore. Given the precariousness of each, the path towards normalization remains fragile and uncertain.

Margaret Williams is a Research Assistant in the Middle East Program at the International Peace Institute.