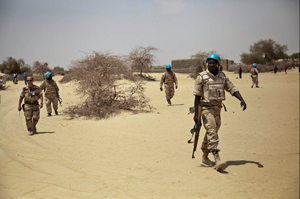 Tomorrow, June 25, the UN Security Council will extend the mandate of the United Nations Multidimensional Integrated Stabilization Mission in Mali (MINUSMA). One year after its establishment, MINUSMA is at a critical crossroad. A recent report from the UN Secretary-General concludes that the security situation in northern Mali has deteriorated since the beginning of 2014. The report observes an expansion of areas controlled by armed groups after clashes in Kidal and concludes that there is no common vision between the government and armed groups on the way forward for negotiations. With a decrease in security and no progress in negotiations, let alone in dialogue or reconciliation, MINUSMA is moving further rather than closer to the implementation of its mandate.

In order to bring MINUSMA back on track and make use of its potential, its role has to be framed more comprehensively into both local and regional perspectives. This will require much more than merely “transferring its center of gravity to the north,” as proposed by the UN Secretary-General to the Security Council.

First, MINUSMA has not succeeded in breaking down its mandate in simple terms for the people of Mali. The international community is expected to help stabilize the country and to work with the government to include the north in a peaceful settlement that will provide human security for all. Instead, MINUSMA is seen as playing a role on the ground, but not sufficiently in consultation with the government. The recent incidents have compounded this perception. In response, MINUSMA needs to more clearly incorporate human security principles and develop a communication and outreach strategy that will clarify what it intends to deliver.1

Second, the self-standing conduct of the French Operation Serval adds to the confusion. The important role of the French in providing military assistance and in support of brokering a ceasefire after the recent outbreak of violence leads to questioning whether France is controlling MINUSMA. France also sustains its own relationships with several of the local armed groups in the north. With Operation Serval shifting to a “regional posture,” efforts need to be made to ensure that what is happening under a UN Security Council mandate in Mali is unambiguous in terms of policy imperatives, command, control, and accountability.

Third, the Mali government has to understand that operating within the principal territorial integrity of Mali does not imply that MINUSMA can be called upon as a bodyguard of the government. MINUSMA has to be a credible force setting the stage for negotiations and dialogue between different stakeholders. While acknowledging that it is not easy to navigate the clutch of political, religious, and criminal interests in the north, the grievances of the Tuaregs have to be taken seriously by the government and cannot be simply overruled.

Fourth, we have pointed earlier at the importance of accepting that the Malian security forces are a part of the problem and the consequent need to prioritize structural reform over technical training. “If there is no such message and plan from the international community, the Malian military will gladly enjoy the benefits of new hardware and trainings, but continue to feed the instability in Bamako and elsewhere.” This is what happened last May (or possibly worse) when the Mali Defense and Security Forces (MDSF) left Kidal running in yet another sad defeat. The profound reform of the MDSF has to be taken up with vigor, consistently supported by MINUSMA, the European Union, and other donors.

Fifth, an ECOWAS preventive mechanism must be used to create coordination in support of mediation in an effective regional framework, beyond ECOWAS membership, including Algeria and Mauritania. The current ECOWAS-appointed mediator, President Blaise Compaoré of Burkina Faso, is perceived to have lost credibility because he is preoccupied with a prolongation of his stay in office through constitutional amendments after his current mandate expires. His personal struggle for political survival and accusations of taking sides in the mediation effort reinforces the credibility question. ECOWAS should be engaged to ensure that all countries in the region with a legitimate interest in the conflict in Mali can rely and have trust in the mediator.

Sixth, in framing the conflict, the aspect of religion has to be approached very carefully. With “jihadism” seen as an important root cause of the violence, there is a tendency to reward “moderate Islam” over “extremists.” However, these are all very vague terms. What Mali needs is more dialogue within and between religions to build co-existence. Religion should not be used as a tool to support a greater split in society by supporting one group over the other. Inter-Muslim dialogue appears to be happening more in Senegal and Burkina Faso. Why not in Mali?

The UN Secretary-General is correct in observing that “the status quo is not acceptable” in Mali. We cannot expect miracles from MINUSMA, but it has an opportunity to provide a safe space to galvanize the relationships between different stakeholders in the conflict. Above all, for MINUSMA to include the people of Mali in implementing its mandate, the suspicion around dialogue needs to be removed. We in civil society can also do more in clarifying what dialogue is and how it can help to provide peace and human security for all people in Mali.

1 See also statement by Oulie Keita from WANEP-Mali for the 18 June 2014 UN General Assembly Thematic Debate on Human Security and the post-2015 agenda.