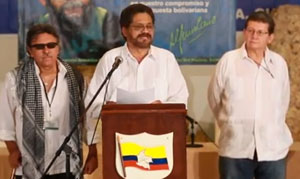 The peace talks between the Colombian government and the Revolutionary Armed Forces of Colombia (FARC) reached a milestone on May 16, 2014 with a partial agreement on drug trafficking. The arrangement seeks to treat the growers of illicit crops differently than the criminal organizations involved in other phases of the drug trade. The strategy focuses on the participation of communities in agreements with the Colombian state to substitute their illegal crops and to not participate in the marketing of raw materials derived from them. All illicit crops—whether or not their farmers agree to crop substitution—will also be subject to eradication, either voluntarily or by special groups created by the state especially for that purpose. This eradication could include aerial fumigations, a controversial technique that has previously destroyed food crops, damaged the environment, and caused forced displacements, though the government has promised to prioritize manual eradication “whenever possible.”

In exchange, communities will be given the opportunity to design, execute, and monitor local substitution plans that will be incorporated into municipal government plans, with support from provincial and national governments.

Historically, Colombia has had no alternative livelihoods policy for settlement areas where inhabitants’ income depends on illegal crops. The policies of force prevail over development alternatives. This distortion explains the repeated failures of a strategy that continues to focus on farmers, who are one of the weakest links in the drug chain.

As I outlined in this report, coca-growing areas persist in large part because wealth in Colombia is unequally distributed and the increasing concentration of land ownership continues to force peasant farmers to settle elsewhere. (A 2011 United Nations report found that 52 percent of rural land is held by 1.15 percent of the population).

Being expelled from their places of origin or settlement, farmers are installed in remote areas considered “zones of colonization.” These territories are characterized by fragile soils and a lack of infrastructure and roads, making their low production uncompetitive. Therefore, coca has historically been an attractive alternative for these settlers. In the context of an illegal coca economy, the displacement of farmers is a symptom of a structural problem that governments have not tackled in their strategies for controlling the drug supply.

In addition, in the context of a prolonged armed conflict and an illegal drug economy, both guerilla groups and other armed groups have taken control of different territories, resulting in the provision of private security services, power gains over the appropriation of surpluses in the cocaine paste (PBC) market, expanded participation in the cocaine refinement and production process, the diversification of drug shipping routes, and the development of ties with international drug trafficking groups. At the same time, the practice of purchasing land to launder money took off, and while this “cleaned” illicit money, it also transformed regions—both socioeconomically and in political and electoral processes. Power-sharing agreements were formed for territorial control, which have enabled illegal groups to continue to function and even dominate in a symbiotic relationship with legitimate powers.

All of these factors make a strong case for viewing the problems associated with the coca economy through the prism of territorial development. However, such an approach is noticeably absent in the agreement. For example, there are no suggestions for using land seized from drug trafficking as an opportunity to offer farmers alternatives that take into account geographical location, soil quality, and marketing opportunities for new crops. In the agreement, the word “substitution” puts coca at its center, and this is its most serious limitation. It prioritizes simply reducing the area of coca crops as if that were the fundamental problem, and not territorial development.

Additionally, a territorial scope would take into account the nature of the land on which coca is cultivated and the communities in which it is grown, bringing about much-needed conversations about other resources on the ground: oil, mining, and protected areas.  The difficulty of both sustainability and competitiveness for farmer production demands an examination of other possible sources of income for the inhabitants of these territories.

Yet, in the agreement, it seems the role of communities in shaping alternatives for economic activity and development is limited to their participation in problematic crop substitution plans; the most important issue is coca eradication. In other words, the agreement is a ratification of current prohibitionist drug policy—in this case, the struggle for zero coca and zero drug trafficking.

Broader agricultural issues were addressed in the peace talks last year, and on May 26, 2013, the FARC and the Colombian government reached an agreement on the first point on the agenda: agricultural development aimed to help the rural sector in Colombia, which is characterized by high concentrations of landownership, informal tenure of land, vulnerability of the small producers, institutional weakness, and the concentration of poverty (53.1%) mainly in the segment of farmers.

In the context of a weak state and armed conflict, the vulnerability of the rural sector creates conditions that favor the illegal coca economy. In this sense, the first point of the agreement is a set of liberal measures for the rural sector, where the formalization of property becomes important, as well as the presence of institutions that support small farmers with guarantees that provide access to credit, technical assistance, markets, and infrastructure.

The implementation of this in the territories will be a big test of the capacity of Colombian state institutions. The rural sector interest groups, trades unions, and landowners view the peace agreement with suspicion. In contrast, they demand from the state protection of property (legal certainty) and policies that support them and not the guerrillas who are considered a threat to their interests. The dominant interest groups in the rural sector are seeking to preserve the status quo, which allows them a property and taxation benefits.

For the agreement on drug trafficking, its most significant achievement is that it represents the formal exit from the drug trade of an armed group that has challenged state authority and sought political power through an armed struggle in which the drug trade has played an important role over the last twenty years.

However, the structural conditions for illegal economies such as coca cultivation to continue providing a source of income for excluded sectors are still in place, including a decline in the mining sector—which reduced illegal crop cultivation during the boom—and the powerful resistance of large land owners and other “winners” under a model that has concentrated land into very few hands. The withdrawal of the FARC will create a new context for restoring the illegal coca economy under new conditions, which could mean more income for those mostly farmers who previously were denied access to most of the profits from the drug trade given the predatory nature of the guerrillas, who controlled the “spot cash” of the coca economy and reinvested most of their earnings in the war.

Ricardo Vargas is a sociologist and Associate Fellow at the Transnational Institute. He tweets at @rivarme.