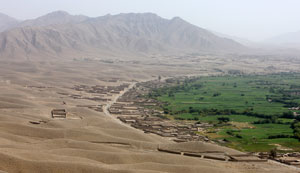 One thorny issue between Afghanistan and Iran is the Helmand River, which irrigates this green zone in the river valley town of Sangin, Afghanistan. (UK Ministry of Defense)

As Afghans prepare to cast their votes on June 14 in what is set to be a decisive step in their path toward consolidated democracy, these presidential elections, besides being the expression of the will of the Afghan people, will also serve as an important opportunity to reassess Afghanistan’s stance vis-à-vis neighboring Iran. Much of the electoral campaign has focused on the post-2014 security arrangement and the bilateral security agreement (BSA) with the United States. Part of the Strategic Partnership Agreement signed by both countries in 2012, the BSA is an arrangement that would shield from local prosecution the nearly 10,000 US and NATO troops that would remain in the country after 2014. Although President Hamid Karzai has repeatedly refused to sign the BSA, both contenders in the elections, former Foreign Affairs Minister Abdullah Abdullah and former World Bank official and Finance Minister Ashraf Ghani, have vowed to sign it once in office.

While there is little doubt that the agreement will be essential to the country’s transition to peace, Afghanistan’s future is about more than just the BSA. Afghanistan shares a 600-mile (936km) border with a key regional power, Iran, which has an ambitious geopolitical strategy both in the Middle East and in the Central Asian region. This means that the next president will also have to carefully assess how to move forward with Afghanistan’s approach to Iran.

Afghanistan and Iran share a linguistic and cultural heritage, thanks to the centuries during which parts of Afghanistan belonged to the Persian Empire. Today, the relationship between Tehran and Kabul is an intricate one. Over the years, Iran has both contributed to and hindered stabilization in Afghanistan, raising questions about the nature of its long-term foreign policy goals there. At the same time, though aware of the often destabilizing role played by Iran, Kabul has had to accept Tehran’s economic and cultural influence in Afghanistan’s western territories.

The next Afghan president will need to work with Iran without estranging the Americans while also cooperating with Washington without unnerving Tehran, also in light of Iran’s ongoing nuclear negotiations. The task is a complex one. But the country’s economic and political future will depend on it, primarily because of Iran’s clout in the Afghan economy and its potential to undermine Afghanistan’s internal stability.

Helmand River: an Environmental Issue Used as a Political Tool

One of the oldest and most contentious issues between Iran and Afghanistan involves the Helmand River basin. Running for 715 miles (1,150 km), the river is the longest in Afghanistan, and is used as a source of irrigation in the provinces of Helmand, Kandahar, and Nimruz. This means that the river and its water affect over two million Afghans. In Iran, the river irrigates the southeastern province of Sistan-Baluchistan, where more than 2.5 million people live.

The problem with the Helmand River is that it has often been used as a political tool, despite it being primarily a human security and environmental issue. After the Taliban ordered the killing of Afghan Shiites and Iranian diplomats in Mazar-i-Sharif in 1998, the two countries almost went to war with each other as Iran posted over 270,000 soldiers along the border. As tensions rose, the government in Kabul decided to cut the Helmand’s water flow into Iran as an additional hostile act. The cut lasted until 2002.

When Afghanistan began reconstruction work on the Kajaki Dam on the Helmand River, a move Iran loudly protested, Tehran sent a group of border guards into Afghanistan to force the re-opening of the dam. The episode led to an armed skirmish between the two countries that left two people injured.

As of today, the Helmand dispute is still unresolved, the Kajaki Dam is still a sore topic, and the 1973 Helmand Treaty, the last attempt to put an end to the quarrel, hasn’t been ratified by the Afghan government yet. Kabul is unlikely to halt reconstruction of the dam completely, not only because of its energy potential–currently estimated at 51 MW–but also because the project is worth $ 76 million of USAID-facilitated funds. What the Afghan government can and should do, however, is sit down with the Rouhani Administration and at least show the willingness to reach some form of compromise.

The next president cannot avoid confronting this issue, not the least because it affects a sizable portion of the Afghan population. Also, while the Helmand dispute may not be crucial in itself, it could be the important element of a larger, constructive agenda that can create negotiating room in the security area, where Iran has been deeply involved.

Following the terrorist attacks of September 11, 2001, Tehran offered its support for the invasion of Afghanistan and the overthrow of the Taliban regime, primarily because of its perception of the regime as an ideological, political, and security threat. Iran opened its airspace to NATO forces, enabled the offloading of humanitarian supplies, provided intelligence on Taliban movements, and played an active role in reconstruction efforts after the fall of the Taliban. “Iran cannot be safe while there is instability in Afghanistan,” said Iran’s then-President Mohammad Khatami in Tehran during a 2005 visit by Mr. Karzai. In the eyes of Iran’s leadership, ensuring Afghanistan’s stability meant supporting efforts by both the Karzai government and coalition forces to eliminate the Taliban threat.

More recently, Iran has reversed its course and has supported the Taliban insurgency in several ways. In 2007, NATO forces intercepted a weapons shipment directed to the Taliban that had “clearly originated in Iran” with the knowledge of “at least the Iranian military.” The decisive turn in Iran’s approach to the Taliban did not take place until the 2012 signing of the Strategic Partnership Agreement and the possibility of a permanent US presence in Afghanistan.

This shifted Iran’s strategic calculus. Whereas only a decade earlier Iran was committed to a complete removal of the Taliban regime, by the early 2010s, Tehran had begun supporting the Taliban so as to weaken US and NATO forces, with the hope of eventually driving the latter out of the country. In supporting the Taliban, however, Iran has directed the group’s activities toward eastern and southern Afghanistan, away from Iran’s real region of influence, Herat, where the essence of the Afghan-Iranian bilateral relationship lies.

Iran’s reconstruction assistance to Afghanistan has overwhelmingly focused on the Herat region, with the bulk of its investments going directly to the city and its surroundings. In 2005, a major highway connecting Herat to the Iranian border city of Dogharoun was entirely paid by Tehran, in a clear effort to boost trade between Iran and the Afghan city. Iran also reportedly paved half of Herat’s streets, is the main supplier of electricity to Herat and other cities around it, and currently funds the vast majority of the nearly 2,000 private companies that operate in the city. Iran now carries so much economic clout in the region that it would be impossible to ignore the extent to which Afghanistan’s economy as a whole is deeply intertwined with that of its neighbor.

That being said, at some level the extent of Iran’s economic and political influence, not to mention Kabul’s ability to regain control over the entire country, depends on the next steps the US decides to take. It is no longer a secret that Iran doesn’t want a prolonged US presence in Afghanistan. The challenge is that, BSA aside, the US is unlikely to leave the country entirely if the Taliban is still perceived as a significant threat.

The solution to this quandary is not unworkable. First, if the US and Iran make progress on the nuclear talks in a way that is palatable to both sides, Tehran may back down from its aggressive, destabilizing strategy in Afghanistan. This is because supporting the Taliban is not in Iran’s long-term interest. Its main interest in Afghanistan is stability, while its destabilizing efforts have only served as an indirect way to reassert its influence there vis-à-vis the United States.

The second part has to do with Afghanistan’s own efforts. At the end of May, President Barack Obama announced his decision to withdraw all US troops by the end of 2016, even assuming the BSA is signed. This means that the new Afghan president will have a little over two years to ensure Kabul gains full control of the country, and that the Taliban threat, if not eliminated, is at least substantially defused.

Ultimately, the new president will need to recognize that reassessing the country’s ties with Iran is in Afghanistan’s long-term interest. Both he and his administration will need to show the political will and the capacity to at least initiate a discussion of the Helmand issue. The river dispute is but one element of the bilateral relationship, but reaching a compromise over it will undoubtedly open gateways to other important matters, such as Iran’s influence in the western region and its continued support of the Taliban. Kabul is unlikely to give up completely on the river or the Kajaki Dam, but the two sides will need to sit at the table and try to come up with a compromise. To that end, Kabul’s next steps will determine whether Iran will still have reasons for meddling in Afghanistan’s internal affairs.