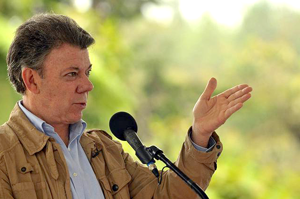 “It would truly be an immense error, an historic catastrophe, to send all this effort to the trash can,” Humberto de la Calle told 200 businesspeople in a talk on June 11. De la Calle is the Colombian government’s lead negotiator in peace talks that have been underway in Havana for almost two years with the Colombian Revolutionary Armed Forces (FARC) to resolve a long-standing internal armed conflict with the hemisphere’s oldest insurgency. In this Sunday’s final run-up to a presidential election that is too close to call, and whose results could put the incumbent out of office, the big question on many minds relates to the future of the peace process that President Juan Manuel Santos has spearheaded since assuming office in August 2010.

On May 25, 2014, in the first round of presidential elections on a slate of five candidates, Santos came in second to Oscar Iván Zuluaga, a protégé of ex-President Alvaro Uribe and an opponent of the peace process, with 25.69% of the vote to Zuluaga’s 29.25%.  In the absence of a clear majority for anyone, a run-off election is required and will be held this Sunday, June 15.  Both candidates have been scrambling to get the votes of the losing candidates and to appeal to the 60% of the electorate that failed to show up at the polls.

The electoral results and the new alliances that back the winning candidate could well determine whether and under what conditions a peace accord will finally be signed after half a century of war.  Marta Lucía Ramírez, the third place contender in the first round, garnered two million Conservative Party votes and has thrown the weight of her party behind Zuluaga after securing from him an agreement to back off on his call to suspend the peace talks in Havana.  Zuluaga’s modified position calls for public review of all agreements reached; gives the FARC a month to comply with a series of demands including ending child recruitment, the use of land mines, and terrorist attacks; and would set a limit for termination of the talks. Many believe that the conditions Zuluaga proposes and his insistence that the problem is one of terrorism, not internal armed conflict, could shut down the talks.

Incumbent-candidate President Santos, on the other hand, has now gotten the endorsement of most of the leftist parties and alliances, who represented about two million voters in the first round, and the backing of the major labor confederations, the indigenous movement, the peace and human rights community, women’s movements, and progressive social movements.  At a June 5 launch of the new Broad Front for Peace in Bogota to endorse the Santos candidacy, Jorge Rojas, Bogota’s Secretary for Social Integration, and a leader of the Front, noted, “We are giving a mandate to candidate-President Santos to carry the peace process to its conclusion, but it is not a blank check.” These supporters vow to help keep the peace process on track and to ensure that the agenda for peace is an agenda for change and social justice.  They pledge to hold the government accountable to any agreements made at the table in Havana.

Ironically, the danger of losing the chance to bring the peace process to fruition appears to have energized the peace process and increased the visibility of its supporters.  Civil society has engaged in a veritable whirlwind of forums, seminars, marches, meetings, and audio-visual production to support the peace process.  The government has begun to bring its messages about the peace process and what it hopes to accomplish into public view. Government negotiators are speaking out at public and private forums, in the press, and on educational videos posted at the presidency’s website and on YouTube.  The government has finally announced it would convene (after the elections) the National Peace Council, a structure designed to allow civil society to give inputs on peace processes that has been untapped for years.

The peace talks with the FARC have taken off in the past month, producing some of its most significant advances.  The process has been methodical and serious from the start and has a strong foundation that suggests it will be able to produce a final accord.  Following a year and a half of discreet contacts and confidence-building measures that lead to 6 months of secret exploratory talks in Havana, a framework agreement was signed on August 26, 2012 between the government and the FARC.  The agreement laid out agreed principles, a methodology, an agenda, and a roadmap for peace talks.  With the support of Norway and Cuba, and the accompaniment of Venezuela and Chile, the parties have now completed 26 cycles of formal talks and have produced agreements on three of the five substantive agenda items—agrarian reform, political participation, and illicit crops and drug-trafficking.  The remaining items include victims and the terms for ending the conflict.

Although the parties in Havana have sought to remain insulated from Colombian electoral politics, since the first round of presidential elections on May 25, the process appears to have entered an accelerated mode.  On June 6, the parties announced what the government’s lead negotiator, Humberto de la Calle, called an “historic step”:  a joint Declaration of Principles for dealing with the issue of victims.  The Historical Memory Center’s comprehensive report, Basta Ya! Colombia: Memorias de guerra y dignidad (Enough Already: Memories of Dignity and War) tells of 220,000 conflict-related deaths, the internal displacement of more than 6 million Colombians, and a litany of forced disappearances, extrajudicial executions, kidnappings, sexual violence, and other violations of human rights and international humanitarian law in the prosecution of the war.The issue of the victims is by far the most far-reaching and emotionally charged issue on the Havana agenda.  “Iván Márquez” (aka Luciano Marín Arango), the head of the FARC delegation, noted this week, “We are taking the first steps in a terrain plagued with difficulties, and enormous miscomprehensions born of the ignorance of the history, origin, causes, development, and actors engaged in the longest internal conflict of the continent.”  In their newly agreed principles, the parties put the victims at the center of the debate, and promise to consult with the victims to find the proper way to satisfy their rights to truth, justice, and reparations, and to guarantee that the violence will not be repeated.

In tandem with the Declaration of Principles, the parties invited a delegation of victims representing a broad range of victimized groups to join the table in Havana, and called on the United Nations and the National University to organize forums on the theme of victims, much as they did previously on agrarian development, political participation, and illicit crop cultivation and drug trafficking.

Last week, the parties announced three other procedural breakthroughs: the establishment of a historical clarification commission on the conflict and its victims, which would precede a future truth commission; a technical commission to discuss the final agenda item relating to the end of the conflict which others in the negotiating teams would continue to work on the issue of victims; and a subcommittee on gender, which will consult with national and international experts and include members of both delegations.  These innovations have particular merit in terms of improving the substance of forthcoming agreements and are also likely to speed up the peace process.

As if these advances were not enough, the Colombian government announced just last Tuesday, June 10, that it had been engaged in dialogue with Colombia’s smaller insurgency group, the Army for National Liberation (ELN) since 2013 and was now in the midst of exploratory talks that had identified victims and citizen engagement as the first items on a peace agenda.  The process has the full support of the nations accompanying the peace process in Havana, as well as Brazil and Ecuador, where the exploratory talks had been underway since early this year.

This has prompted the Santos government to do something that is long overdue—bring civil society into the process and ensure broad public support for its peace endeavor.

With elections looming on the horizon, it appears to be a race against time for the Havana peace process.  The question is whether an accelerated peace process can deliver the victory that Santos is seeking at the polls, and whether a Santos victory at the polls will give Colombians the peace they so desperately want and deserve.

Virginia M. Bouvier is a senior program officer for Latin America at the United States Institute of Peace. The views expressed here are solely those of the author.