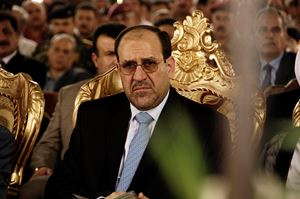 Dr. Charles Tripp, professor of politics at SOAS University of London, spoke to the Global Observatory’s Ramy Srour yesterday on recent developments in Iraq and if support for Maliki is waning among his allies, and what the US, Iran, and other regional players might do about the militant group ISIS’ growing insurgency, which some believe is threatening to divide the region.

Dr. Tripp has researched extensively on the Middle East and on the nature of autocracy, state, and resistance in the region.

Given ISIS’ extensive gains in the majority Sunni areas and reports that Kurdish fighters have now seized the town of Kirkuk, do you think Iraq is disintegrating into three de facto states, a Sunni, a Kurdish, and a Shia state?

I don’t think it’s got to that stage yet. I think that since 2003, there have been two de facto states in Iraq–one is ruled from Baghdad, and the other from Irbil in the north, in the Kurdish area. When you look at the solidity of the Kurdish area, it certainly looks like a state to me. It has its own economy, armed forces, sovereignty, Parliament, and so on.

I think the situation in the northwest of Iraq, the so-called Sunni areas of Iraq, is far more fluid and, despite the claims that it is going to establish the Islamic State of Iraq and the Sham (ISIS), it’s still a very uncertain situation and I don’t think one could talk about three states at all, no.

Do you think this advance is having any kind of effect on Prime Minister Nouri al-Maliki’s personal legitimacy as a leader, and if so, what do you think are his options for preserving the integrity of the country as well as his office?

I think that’s the real effect of the advance of ISIS over the last two weeks or so, not simply on the populations of northwest Iraq who had to suffer underneath them, but in a sense, also on  Prime Minister Maliki, who has just come out of a general election believing that he has a mandate to rule the country for another five years.

But there were clearly people who were unhappy about that on his own side as well as his opponents’, and you could argue that the military successes of ISIS and the hopeless performance of the Iraqi security forces is an indictment of Maliki on two counts: One is that he never appointed a minister of defense; he claimed to be minister of defense himself; and the other is that he has exercised his full powers as commander in chief of the Iraqi armed forces and has used those powers really to try and create a loyal following, but in doing so he undermined  the effectiveness of the armed forces themselves. So, on two counts you could argue his authority and legitimacy–not so much from popular mandate, but from the way he’s behaved–have been undermined.

Just this week, there were reports suggesting that Mr. Maliki is actually managing to protect Baghdad and is trying to gain control back of Tal Afar.  What’s your assessment of these efforts in Baghdad?

Well, I am sure that not just he but most of the population of Baghdad are trying to defend the city itself, and I suppose also one could argue that the attempt to recapture Tal Afar in the north is a way of trying to reverse some of the obvious defeats that the Iraqi army has suffered. So, I can imagine that Nouri al-Maliki is now trying to act being minister of defense, act being commander in chief in a more effective way. But, of course, whether he’ll be successful is another matter.  Given the nature of ISIS, I think it’s very unlikely that they could ever capture Baghdad, so there’s also a question there about whether he’s jumping on a bandwagon in a sense, that it’s the people of Baghdad who will defend themselves. And Maliki will try and claim the credit.

What do you think are the effects of these developments on the sectarian balance across the Middle East region?

Well, in some ways I think these developments have been a symptom of a growing sectarian conflict across the region, or a region which is being marked by conflicts that take on increasingly sectarian hue. I don’t think the conflicts are only about sectarian differences, but certainly in some places, it’s convenient to emphasize religious difference between Sunni and Shia and between different kinds of Sunni and different kinds of Shia, and so on. So I think in some ways it’s a symptom of that.

But in so far as it is a symptom of it, it’s also feeding into it. And if ISIS put themselves forward as the representative of a certain way of being Muslim against three quarters of the population or more of Iraq itself, then clearly that will sharpen the sectarian divide.

Equally, with the accusations that Maliki and others represent only one sect in politics in Iraq–which isn’t completely true, but they certainly behave rather that way–that also fed into the connections with the sectarian difference. And if you add to that Iran on one side, and the civil war on the other, one can see that unfortunately for Iraq and for the region, the present conflict does indeed seem to underline the fact that the only major conflict in the region is one between Sunni and Shia, which isn’t true, but certainly is powerfully present as an image.

There have been rumors of US-Iranian cooperation on a possible response to the crisis and reports have emerged that US and Iranian diplomats actually met in Vienna on the sidelines of the ongoing nuclear talks this week and have discussed the crisis—whether or not they discussed an actual joint response is not clear. How likely do you think that Iran will actually get involved in pushing back ISIS within Iraqi borders?

Well, there are reports that Iran is already militarily involved–whether that’s true or not, we don’t know. In other words, that they sent military personnel or advisers across to assist the Iraqis in repelling the ISIS fighters. So there’s definitely that sense of direct involvement, and they’ve made threats to ISIS that if they approach 100 km of Iran’s borders, they would be bombarded by the Iranians themselves. So, there’s that direct military element.

But there’s also of course a larger political question, which is that Maliki has been or has enjoyed a good deal of Iranian support over the last six or seven years. And, there’s a question mark there, which is about whether Iran, having backed him as the factor for stability and so on in Iraq, is really having second thoughts about that. So I think in the longer term, there is a question about whether Iran really wants to go on backing Maliki or someone else who can perhaps deliver a more orderly, more stable Iraq.

What do you think are the options for the Western powers, and specifically the US and those countries that joined the United States in 2003 during the invasion? Do you think they have any kind of interest at stake in the country?

In that regard, the Obama administration mentioned this week it would send 275 Marines to Baghdad with the specific “mission of safeguarding the embassy and embassy personnel.” Do you think this move has any kind of message behind it? What do you think is the significance of this announcement?

Well, I suppose it’s twofold. One is reassuring the United States, where Obama is coming to a huge amount of criticism from domestic audiences that he didn’t foresee this and that he’s putting American interests and possibly even lives at stake, so the last thing that he would want is that anyone in the embassy or wherever in Baghdad—a US citizen—would be threatened by the kinds of developments that we’ve seen taking place. But of course the other one is a marker of complete loss of confidence in Maliki’s ability, the Iraqi government’s ability even to secure its own capital. So in that sense, I don’t think this is a military move to support the government of Iraq, rather it could be a military move to suggest that the government of Iraq is completely hopeless, and that under the conditions that exist at the moment, the only way in which Americans can be sure of American safety is through American forces helping them to escape if necessary.

Do you think that if the Obama administration, or the West in general, lose enough confidence in Maliki’s power to counter this threat, an air or a military response is actually on the table?

I don’t know. I mean, Obama has said that everything is on the table, but clearly, there are people who think that any kind of airstrike would probably be deeply unwise, given the nature of the ISIS advance. The ISIS advance isn’t sort of columns of tanks, not a conventional army moving in on Baghdad, but people in pick-up trucks whizzing around the countryside, people on foot. This is going to be very, very difficult to deal with, I imagine, from a military, logistical point of view. So, there is a question about whether any American military aid will actually have any effect at all on the advance of ISIS, or whether it will simply be seen as yet another example of the United States having recourse to military force where any other method will do. So, I imagine that’s one of the reasons why they are talking to the Iranians, if they are, about what are the options for these two major backers of Maliki faced by an insurgency that Maliki can’t deal with and wondering about how to replace him possibly with another person who could bring a more orderly future to Iraq.

Dr. Tripp, thank you so much for being with us on the Global Observatory today.

Thank you very much.

Ramy Srour is the Assistant Web Editor at the International Peace Institute. He tweets at @Ra_Srour.