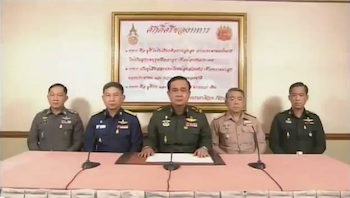 On May 22, Thailand’s General Prayuth Chan-ocha seized power in the country’s 12th successful coup since democracy was installed in 1932. The army had, on May 20, declared martial law by invoking the country’s 1914 Martial Law Act, and held two days of ineffective negotiations. It was at the negotiating table that General Prayuth seized government power, detaining the parties he had invited to the dialogue, who were key actors from both sides. It was a move that will likely harm confidence in future negotiations and dialogues in a country plagued by political crisis.

For Thais, it was déjà vu. General Prayuth had participated in the 2006 coup, which, under similar circumstances, removed then-Prime Minister Thaksin Shinawatra—the brother of former Prime Minster Yingluck Shinawatra, who, on May 7, was forced by the Constitutional Court to step down.

Prayuth has promised to reform the country’s institutions and then hold elections. It’s a familiar overture, and one of the reasons Thailand finds itself at this juncture today. In 2007, the army wrote the very constitution it recently suspended. It appointed a government and failed to stop the strong politicization of the judiciary that has crippled the country.

The root causes of this conflict lie in Thailand’s political divide. Thailand has been cleaved in two by a deep political polarization that has only grown worse over the past decade.

On one side is the group popularly know as the Yellow Shirts, largely made up of wealthy and middle class Bangkokians and Thais from the country’s south. In recent months, they have been led by Suthep Thaungsuban’s People’s Democratic Reform Committee (PDRC). The PDRC took to the streets to protest against the proposed Amnesty Bill that was clumsily pushed through by Yingluck’s Pheu Thai Party government (the bill would have offered amnesty to Thaksin, who is currently in exile). Suthep has been a bulldog of the Democrat Party, Pheu Thai’s main rival, for four decades. The party is closely tied to the PDRC movement and draws its support base from the Yellow Shirts. The army leadership is also seen as pro-Yellow Shirt.

On the other side is the group known as the Red Shirts. They have successfully elected, in strong majority, Pheu Thai and other Red Shirt parties for over a decade–including both Shinawatras. The base of their support comes from the north and northeast of the country with a vocal protest group formed by the United Front for Democracy against Dictatorship (UDD), the leader of which has publicly expressed his anger over the coup and declared that there will be retaliation.

Members from all these parties were rounded up by the army and have been detained. Former Prime Minister Yingluck has also been detained–according to the army, to allow her time to “think.” A crackdown on academics and political commentators is also currently underway. Many if not most of these actors are from the Red Shirt camp. As the military government’s power extends, it appears that they have chosen their allegiances–the Yellow Shirts.

In a country that has for so long suffered deep divisions, creating unity is the only way out of this crisis. Instead, it appears we are heading in the opposite direction, and for a repeat of 2006.

Indeed, some reform is needed. This has been most evident in the judiciary, which has become increasingly politicized—it was the Constitutional Court that removed Yingluck and annulled the results of this year’s election. Both moves were seen as contentious and drew on dubious interpretations of the constitution. Both moves also set dangerous precedents moving forward.

It is this reform that the army has ostensibly set out to undertake. Yet, the reform will be done wholly undemocratically and not ushered in by any elected representatives. This is the army’s gravest mistake, and is the same trap that led to the failure of 2006.

A locally-owned process is imperative for a lasting solution. Numerous conflicts have taught us that. But that cannot come from a solution that is created by the army and force-fed to Thais. At least one side won’t be able to swallow it.

If events unfold as they did in 2006, then the army will hold power for at least a year with the support of an appointed (unelected) government drawn from the Yellow Shirt-backed Democrat Party. During this period, reforms to the constitution and institutions will take place. Yet reform without elections will be seen by Red Shirts as elitist and supportive of Yellow Shirt demands—the military set the precedent for this belief in 2006. There is no indication that reform will be an inclusive process, and even if it is, there will be enormous skepticism that could boil into protest.

One key factor at play in all of this is the Thai economy. The economy has slowed, but it has so far weathered the storm. Reports by ratings agencies have grim predictions for the second half of the year with a serious contraction predicted. Moody’s offered the possibility of a 0.2% economic growth this year, and that was prior to the coup.

The military government certainly won’t create much confidence. In fact, though it has stated that this is only a short-term installment and elections will follow, many investors will see it as a postponement of instability. Important long-term investments are likely to falter. In the short-term, tourist numbers will be down, hitting the pockets of many Thais, a frustration that will put pressure on the military government and could cause any protests to swell.

One of the main differences between 2006 and today is that when the 2006 coup happened, the economy was growing; today, it is contracting. With confidence in the country already waning, the coup’s negative impact on the economy could be a significant factor in escalating protests.

An announcement for quick elections and the repeal of martial law will be key indicators of how this crisis will play out. These are key issues General Prayuth should look at. He and his mob have failed at this once before; let’s hope there has been lessons learned from that experience.

In the meantime, frustrations will grow, and smaller protests, already taking place in the capital, are likely to swell. Larger protests in the north and northeast will continue where the military has far less control. The general’s coup is not the end of this crisis. Indeed, it could be just the beginning of something much bloodier.

Elliot Brennan is a non-resident Research Fellow at the Institute for Security and Development Policy, Sweden, and a non-resident WSD-Handa Fellow at Pacific Forum-CSIS, USA. He is currently based in Bangkok.