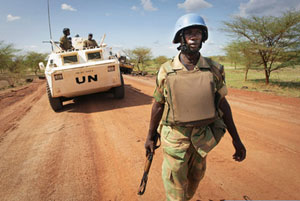 A Zambian peacekeeper walks in front of an armored patrol in the disputed region of Abyei, on the the border between Sudan and South Sudan, May 30, 2011. (UN Photo/Stuart Price)

On May 5, a critical round of negotiations will begin at the United Nations (UN), and the outcome will have profound implications for UN peacekeeping. Since the early 2000s, peacekeeping has grown in both size and complexity. The current mandated surge in South Sudan and the recently authorized operation in the Central African Republic are due to bring UN deployment to unprecedented levels, and both missions exemplify the increased focus on the protection of civilians in UN mandates. Yet both missions are struggling to secure the necessary personnel and equipment contributions from UN member states.

One reason for this is that the UN’s system for financing state contributions to peacekeeping operations has not kept pace with its growing peacekeeping ambitions and commitments. Countries contributing military and/or police personnel to UN operations are eligible for two main kinds of reimbursement payments: one for the costs of deploying their personnel, and the other for the costs of deploying their equipment. One acute problem with this system is that the standardized basic rate for personnel cost reimbursements has stagnated since 2002, causing deep resentment among troop contributing countries and raising fears that current levels of personnel contributions may become unsustainable. A second, fundamental problem is that the current reimbursement structure provides virtually no financial incentives for states to contribute specialized or highly capable military units, or to assume the risks associated with implementing ambitious peacekeeping mandates.

To sustain and enhance its peacekeeping capacity, the UN needs to create a better financial incentive structure for troop and/or police contributing countries. Its ability to do so depends critically on the outcome of negotiations during the 2014 Second Resumed Session of the General Assembly’s Fifth Committee, which begins on May 5.

Standardized reimbursement rates require periodic adjustment to reflect evolving costs. UN rate adjustment debates are heavily politicized, however, not least because of a deep divide between developing states–including the UN’s main troop contributors–and the developed states that are the organization’s largest financial contributors. The Contingent-Owned Equipment Working Group has nevertheless been able to reach agreement on equipment reimbursement rate adjustments every three years, assisted by surveys of state equipment costs. By contrast, attempts at surveying states’ personnel deployment costs were repeatedly unsuccessful and the Fifth Committee has failed to reach agreement on any permanent adjustment to the personnel cost reimbursement rate since 2002. In June 2011, the General Assembly asked the Secretary-General to create a Senior Advisory Group (SAG) to help resolve the impasse.

In October 2012, the SAG advocated a new survey of states’ personnel deployment costs, employing a novel methodology that included a smaller sample size and a more interactive data collection process. The survey was conducted, and its results were announced in March 2014. They suggest that current personnel cost reimbursements (totaling approximately $1,210 per person per month) are too low: within the survey sample, the weighted average monthly deployment cost was $1,536.23, or $1,762.55 if pre-deployment medical expenses, UN-specific training and inland transportation are included. The Fifth Committee will consider this report during its Second Resumed Session, and troop contributing countries can be expected to cite the survey results in support of their long-standing demands for a higher personnel cost reimbursement rate. They will be frustrated–and possibly unwilling to cooperate on other issues–if no satisfactory agreement is reached on this question.

This would be particularly damaging because the SAG’s recommendations extended well beyond the issue of the personnel cost reimbursement rate. The SAG recognized that standardized reimbursement rates mean that there are no financial incentives for states to make especially expensive contributions of highly capable and/or specialized personnel or equipment. There are also no financial rewards for states willing to assume particularly demanding or risky peacekeeping tasks. Moreover, reimbursing states separately for personnel and equipment contributions fundamentally fails to reflect the fact that an effective peacekeeping force consists of task-oriented units combining particular personnel types with appropriate and familiar equipment.

Reimbursing states for integrated units would better reflect this reality and allow the UN to calibrate its reimbursement rates to create incentives for states to provide the most operationally valuable capabilities. The SAG concluded, however, that the UN was not immediately able to transition a unit-based reimbursement system. In the interim, it recommended:

• A risk premium for individuals in units operating without caveats that “acquitted themselves well despite exceptional levels of risk;”

• A premium for “key enabling capacities,” to be paid to the contributing state;

• A penalty decreasing the reimbursements to states whose contingents deploy without promised major equipment.

The Fifth Committee first formally considered the SAG report in March 2013. The debate was acerbic. Some developing states were wary of the survey mechanism; some objected to the missing equipment penalty; and some rejected the SAG’s additional recommendation to extend the standard rotation time for UN peacekeepers as a cost-saving measure. Developed states, however, insisted that the SAG recommendations be adopted as a package.

In May 2013, the General Assembly did so. However, it attenuated the missing equipment penalty and postponed its application until after October 2013. It allowed for the exemption of smaller contingents from the extended rotation cycle until June 2015 and stressed the possibility of further exemptions. Moreover, the premiums were not immediately implemented, and indeed a January 2013 Secretary-General’s report states that they would not be implemented until a new personnel base rate was agreed upon. The March 2014 report on the survey results took a different position, treating the premiums as a separate issue. However, it also argued for the creation of a special fund to implement the premiums, and this requires General Assembly approval.

To varying degrees, therefore, the SAG recommendations remain open to re-examination and challenge at the 2014 Second Resumed Session, and the premiums are particularly vulnerable. Failure to reach agreement on a new personnel cost rate could undermine the progress made to date. Yet failure to implement the SAG recommendations–particularly the key enabling capacities premium–would be a devastating blow to the UN’s first major attempt to move at least modestly towards a more unit-focused reimbursement system.

It is thus critical that the Fifth Committee reach agreement on both an increased personnel cost reimbursement rate and the implementation of the SAG-recommended premiums. The General Assembly should then consider further steps to move towards a unit-based reimbursement system. Only then will the financial incentive structure created by UN peacekeeping financing mechanisms be able to satisfactorily support the UN’s peacekeeping commitments and ambitions.

Katharina Coleman is Associate Professor at the University of British Columbia and the author of the IPI report The Political Economy of UN Peacekeeping, which offer an in-depth discussion of the incentive structure created by the UN peacekeeping financing system.