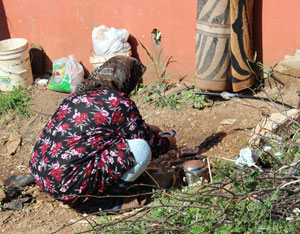 Before the war in Syria, men dominated almost all aspects of society outside the home, and though women were highly educated, they were mainly perceived as homemakers. However, since the conflict began, there is a new tolerance for adaptive strategies that stray from their cultural norms. Such change can be unconscious and perhaps unwanted, but it is recognized as necessary to allow people to cope with war-related challenges.

Last year, the Norway-based research foundation Fafo conducted fieldwork among Syrian refugees and local Lebanese in the north Lebanese village of Bebnine. We found that households will apply a variety of strategies both to leave Syria safely and to maintain core values and a sense of dignity.

For example, Amal (21 years old) left Syria with her four small children after her youngest daughter was born, and now lives in Bebnine. Her husband stayed behind to fight with the Free Syrian Army. After one year, her mother in Syria sent her brother and his wife and daughter to live with Amal. This was not only because of her brother’s needs, but also because Amal’s mother was concerned that she was living alone. To assist Amal, it was seen as necessary to send a male to her household, not least to protect Amal’s honor, which was at risk.

In Syria, men control the political and economic spheres and are typically expected to be the main breadwinner and protector of their families. These are characteristics of a patriarchal society where people are educated into normative gender identities based on particular ideas of masculinity and femininity, created and recreated through every day practice and behavior. Although Syrian women had gained economic and educational benefits prior to the conflict, realizing better gender equality was and is constrained by patriarchal values and norms.

Some studies (see here and here) have focused on how frustrations and feelings of disempowerment among refugee men have generated increased partner violence, and it’s true that the mass influx of refugees into local Lebanese communities has restricted many local and refugee men’s ability to fulfil the role as provider and protector because of intensified competition over scarce jobs.  Much attention is also given to gender-based violence and so-called “survival sex” among female Syrian refugees. Without diminishing the significance of the important work on violence against women, I want to broaden the picture by bringing attention to other coping strategies among Syrian refugee women.

Although some refugee women are vulnerable and have to cope with the challenges of being a refugee without the assistance of male relatives, the majority live with adult male relatives in their household. It is often said that the majority of Syrian refugees in Lebanon are women and children, drawing attention to potential vulnerable groups. And while it is true that 76 percent of refugees are women and children, this statistic can be misleading, as the percentages of female and male refugees age 18-59 are roughly the same, at 24.5 percent and 20 percent respectively.

Khadija is a mother of six. She has a 10-year-old daughter still in school, and five sons aged 16-26 years old. All her sons dropped out of school early in Syria and took different manual jobs. Her husband used to work as a car mechanic in their hometown near Aleppo. They were not rich, but were doing okay. Upon arriving as refugees in Bebnine village, where they initially stayed with local friends, all the men searched for work. “Only two of the boys worked for a while, but now they have stopped, they did not get very much money […] one of them went to Beirut today to search for jobs. The oldest and my husband do not work at all.” Khadija describes her life as a housewife in Syria: “My job was at home to clean and cook and care for the children.” In Lebanon, it is not much different; she cleans the house and cooks the food, although with fewer resources.

While the men often give up searching for work and become bored as they spend more time idle at home, women’s workload has increased. Refugee women are still responsible for domestic affairs, but in an unfamiliar place characte­rized by multiple challenges, from finding appropriate accommodations to shelter the family, to securing enough food for everyone in a complex and unpredictable aid landscape, to locating medical assistance when it is needed.

Ihsan left a ruined house in Homs and was invited to stay with friends in Bebnine with her husband and five children. Now they have moved to a rented room. Her husband has found odd jobs, but Ihsan doesn’t see much money from it. Her challenge is to care for her three disabled children. All need medical attention, but particularly the third is in dire need. “I do not get any help for my handicapped daughter; she needs a new leg because she is growing and the old leg is hurting her, or it is the back that is hurting because the leg is too short […] The United Nations told us we had to wait two months.” In her struggle to cope, Ihsan works a little in her friend’s shop. Ihsan has never worked outside her home before, and her job in the shop does not earn her much money, but she is in a situation where she will take on new challenges and explore working outside the home for the sake of her family’s wellbeing.

Sahar had come to Bebnine one month prior. She lives with her husband and baby in an unfinished building with several other families. When we met Sahar, her baby was sick with respiratory problems, and she was desperately searching for someone in the village to help her with the medicine the baby needed. When her husband failed to find assistance, she searched around herself, knowing she put her reputation at risk by approaching unacquainted men and women in the village. She first went to a women’s organization, hoping they could help her. The organization could not provide such assistance, but referred her to a local Salafi charity organization. After Sahar explained her situation to the charity, she was promised some assistance if she returned to the mosque later that evening.

Both Ishan and Sahar took on new challenges to cope with refugee life; Ishan by working outside the home and Sahar by exposing herself in the village. The latter is no small issue, as rumors of prostitution and low morale among Syrian refugees were flourishing. In fact, several local men claimed that Syrian women threw themselves at them, offering sexual services, just as they talked about more crime in the village. However, the mayor repudiated prostitution happened in Bebnine and the village mukhtars, responsible for mediating local conflicts, claimed little evidence that Syrians were involved in crime and conflicts. The rumors must instead be explained by a general discontent of the mass Syrian influx and the repercussions it has for labor competition and pressure on other scarce resources, which give fertile grounds for stereotyping and blaming the refugees for several misfortunes.

Receiving only ambivalent hospitality from the local community, refugees need local guidance. When Amal came to Bebnine with her four small children, she lived in a tent; her current host family recognized her and invited her to stay with them. Amal’s parents-in-law know the host family from previous work migration, and she does not have to pay rent. The host family feels a responsibility towards Amal and regards Amal as their daughter. They have started to apply family terminology to emphasize the closeness they feel. Amal receives food coupons from the UN every month. Having the two youngest children still in diapers, and no access to a washing machine, she spends most of the coupons on disposable diapers. To provide food and medicine for her kids, she has taken seasonal agricultural jobs. Outside the agricultural season, she has also done domestic work for families in the village.

Working in other people’s homes is not easy in a situation where stereotypes about the refugees’ low morale are growing. To protect her reputation, Amal benefits from her host-mother’s local knowledge and advice: “In Syria, we were not allowed to interact with men, not even our cousins. Here it is a lot different [… but] I am only talking to my [host] brothers … I do not have freedom to go wherever I want; I will always ask my [host] mother for advice for where to go.”

Through this access to local knowledge, Amal can avoid working in dubious households and only work for what is accepted as decent families. In this way, she can both earn a little money and protect her reputation. The extra income gives her access to buy on credit at the local store, because the shopkeeper knows her income will enable her to pay it back. This option is not available for most of the other refugees we interviewed. In addition, Amal is able to buy extra food and medicine when the children are sick. Buying medicine was described as a main challenge by many refugees we interviewed in Bebnine.

These examples show how women refugees in Bebnine village both have found new opportunities to take on different roles as income generators and sometimes as independent heads of households like Amal, but also how patriarchal norms and values present both in Syria and the Lebanese host society continue to control behavior and limit opportunities for self-reliance. The women bring with them expectations to provide food and care for their families, and they apply different strategies to cope with the new challenges. Several of them had taken paid work outside the household for the first time, since their husbands were away or not able to find paid work. Others tried to manage social and cultural expectations, in addition to the economical challenges as a marginalized refugee in one of the poorest villages in north Lebanon. Although some desperately sold sex to provide for a family in dire need, the women we met had found others means to survive.

Mona Christophersen is a researcher at Fafo and a senior advisor at the International Peace Institute.