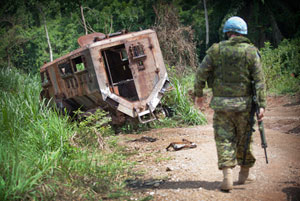 A peacekeeper with the UN mission in the Democratic Republic of the Congo (MONUSCO) walks towards the wreckage of a UN vehicle that was hit the previous year in an ambush by rebel militia. (UN Photo/Sylvain Liechti/March 13, 2014)

In the days leading up to today’s International Day of UN Peacekeepers—a day which “honors the memory of peacekeepers who have lost their lives in the cause of peace”— the Department of Peacekeeping Operations had the unenviable task of reporting an incident in Darfur which had left one Rwandan peacekeeper dead and three others injured. The peacekeepers had been mediating a local dispute when Arab militia elements became hostile and opened fire. This incident, emblematic of the daily work and risks faced by UN peacekeepers, brings home the dangers of trying to build peace in parts of the world still wracked by hostility and conflict. It appeared to be the latest in a long line of attacks on UN peacekeepers in recent months.

These incidents have given rise to concerns that the adoption by the Security Council of new robust mandates for the protection of civilians in semi-hostile environments, combined with the innovation of integrated missions that have aligned peacekeepers more closely with contestable political objectives, has dramatically increased the risks confronting UN peacekeepers. Operating in pursuit of political objectives set by the Security Council in situations that are deeply unstable and characterized by the presence of multiple armed groups, many of which oppose the Council’s objectives, contemporary peacekeepers operating in South Sudan, Darfur, Mali, the DRC, CAR and elsewhere can no longer rely on their perceived neutrality and impartiality to guarantee their own safety. In addition to increasing the direct risks confronted by UN peacekeepers, there are fears that the politicization of peacekeeping might also place in danger those who seek the UN’s protection. It might also inhibit humanitarian access. This is a point made directly by several contributors to a soon-to-be published special issue of the journal Global Responsibility to Protect on the relationship between R2P and humanitarian action.

Along with these operational issues, there is also a significant force generation problem. Several of the troop/police contributor profiles developed for the Providing for Peacekeeping project have identified concerns about the potential for casualties as a significant political obstacle to contributing to UN missions. If peacekeeping is becoming more dangerous, it will become more difficult for the UN to recruit the forces it needs.

But are these concerns borne out by the statistics? Has the adoption of integrated missions and robust protection mandates increased the number of UN peacekeepers killed as a result of hostile action? The answer is a complex one, but as yet, there seems to be no clear connection.

First, that this is not a new phenomenon. Though to differing degrees, peacekeepers have always faced these risks. With roughly equal numbers of peacekeepers deployed, the number of fatalities caused by hostile action is significantly lower today than it was from 1993-1995. Going back further, 1961 was almost as disastrous as 1993 in terms of peacekeeper fatalities, with some 105 peacekeepers killed by malicious actions in Congo (ONUC).  Moreover, the general level of fatalities today was experienced in some individual years in the period between 1995 and 2012, especially 2003 and 2005 when the overall number of peacekeepers deployed was only around two-thirds the number deployed today.

Second, to the extent that there has been a recent increase in UN peacekeeper fatalities by malicious action, it has been a thankfully small one by recent historical standards and, should 2014 continue as it has started, relatively short-lived.

These figures give us only part of the picture, however. For example, variations may simply result from the number of peacekeepers deployed rather than from any particular set of issues. Given month-by-month variations in the numbers of UN peacekeepers deployed (for example, in 1995 alone, the total number of UN peacekeepers varied from over 60,000 to a little over 30,000), it would take some complex mathematics to calculate malicious deaths per 1,000 peacekeepers with any degree of accuracy. As a proxy, we might consider instead the proportion of overall fatalities caused by malicious acts.

It bears noting that, with the exception of 1993, peacekeepers are much more likely to die as a result of an accident or illness than by hostile action.

While the proportion of fatalities caused by malicious action since 2011 is higher than the trend between 2007-2010, it is nonetheless broadly consistent with general trends from 1991 through to 2000 and the year 2003. This would seem to support the view that whatever increase is being experienced is relatively modest thus far and not out of step with previous experience.

A final point to make is that peacekeeping fatalities by malicious actions have always been concentrated in particular missions, and there is no evidence that broad changes in the nature of peacekeeping have had more generalized effects. In the 1960s, the spike in death by malicious action was a product entirely of ONUC. In the 1990s, the most dangerous mission by a significant margin was UNOSOM, followed (some way behind) by UNPROFOR and UNTAC, and then UNAMIR. Today, two missions—UNAMID and UNMISS—account for the lion’s share of fatalities, though there are real concerns that the situations in Mali and the CAR and the mandates of the missions being deployed there will make MINUSMA and MISCA at least as equally challenging in this respect.

This leaves us with the need to explain why there is no simple connection between developments in UN peacekeeping and fatalities caused by malicious action. Among the reasons are no doubt significant improvements in operating practices, information gathering and communications, and peacekeeper capabilities. But another explanation may lie in the way mission leaders translate robust protection mandates into practice. A recent Office of Internal Oversight Services (OIOS) report found that UN peacekeepers typically refrained from using force to protect civilians despite having mandates to do so, preferring instead to limit the use of force to self-defense. Moreover, it found that they were often not present in the most dangerous situations. One result of this is that, despite their mandates, UN peacekeepers are typically not engaged in proactive action to protect civilians or diminish the capacity of armed groups to target them. Hence, they are not necessarily putting themselves in greater danger than they otherwise would. This is perhaps borne out by the fact that many of the casualties described earlier were sustained in the course of regular peacekeeping duties—mediating disputes, escorting convoys, protecting UN bases from attack—rather than in new types of action relating to enhanced protection mandates.

The lesson here seems clear. There has not yet been a dramatic increase overall in fatalities caused by malicious action as a result of the adoption of new mandates by UN peacekeepers largely because these mandates have not been interpreted as requiring the adoption of greater risks by peacekeepers. If one of the consequences of the OIOS report is that pressure builds for a rethinking of the strategic guidance offered to missions on this point, and if this translates into tactics that place more peacekeepers in harm’s way more frequently, then it is reasonable to expect that the rate of fatalities due to malicious action will increase.

To prevent that from happening, it might be worth considering how protection might be strengthened without heightening risks to peacekeepers (for instance, through the use of technology), inviting the Security Council to reflect more deeply on how it expects its protection mandates to be implemented, and reviewing precisely what capabilities would be needed to achieve these effects—and from where they could be secured.