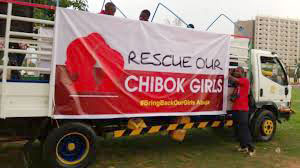 A truck in Abuja, Nigeria promotes the #BringBackOurGirls Twitter tag being used to protest last month’s kidnapping of more than 200 girls by Boko Haram. (Medina Dauda/VOA)

Following the Nigerian government’s flatfooted response to the abduction of more than 200 schoolgirls last month, the West African country this week asked the UN Security Council to impose sanctions on Boko Haram and declare it a terrorist organization. What’s needed now is a concerted, coordinated regional strategy to deal with the group’s increasingly brazen attacks, according to Comfort Ero, Program Director for Africa at the International Crisis Group.

Ms. Ero spoke to me by telephone from Nairobi about the evolution of Boko Haram, the Nigerian government’s response, and the international community’s options. Ultimately, she said, “all roads lead back to Nigeria and Nigeria taking ownership of the problem.”

Last month, Boko Haram kidnapped more than 200 schoolgirls in Nigeria’s northeastern Borno state. What does this tell us about the evolution of this insurgent group and its reach today?

It tells us that Boko Haram has evolved into a pure terrorist group targeting more vulnerable sections of society, preying on soft targets and increasingly resembling Uganda’s Lord’s Resistance Army. It also tells use that the group’s motives are more ambiguous than the original claims of its founder, Mohammed Yusuf, who said he wanted to create a strict Islamic state in the north, meaning also the full implementation of sharia law.

The group came to attention in 2002, but following a major uprising in December 2009 leading to the extrajudicial execution of Yusuf at police headquarters in Maiduguri (Borno State), it mounted major operations against state security apparatus, including police barracks and bars. In parallel, it began assassinating politicians whom they blamed for the country’s poor governance and corruption.

But what we’re seeing today, which is very reminiscent of what we’ve seen in the last five years, is that the group has expanded its violent campaign to include a broad spectrum of society. So, it’s targeting Christians; critical Muslims clerics who don’t buy into its approach; traditional leaders; suspected collaborators; UN agencies; as well as softer targets, including students at state secular schools, marketplaces, and health workers involved in polio vaccination campaigns.

The group also typifies other terrorists groups such as Somalia’s al-Shabaab and AQIM (al-Qaeda in the Maghreb). Its tactics have also become more audacious: they’ve evolved from shootings to the use of IEDs (improvised explosive devices) and suicide attacks, both in response to an increased counter-offensive by Nigeria’s security services and in an effort to stir sectarian conflict.

Are we seeing the height of Boko Haram’s violence right now?

The abduction of these girls is probably the boldest form of violent action that we have seen by Boko Haram since it launched its insurgency in 2010. It represents the most heinous act, and the one that has captured vast international outrage. The only other incident by Boko Haram that captured some degree of international attention was its bombing of the UN building in Abuja in 2011.

What’s your assessment of the Nigerian government’s response?

My sense is that the government was caught off guard. In everything that it’s done since the campaign around “Bring Back Our Girls,” the government appears to be playing catch-up.

That is not to say that the government hadn’t tried various initiatives before. Prior to the abductions, we saw a more heavy-handed approach to this crisis. We saw the use of states of emergency and the deployment of the military and other strands of security into the far northeast of the country. We saw the mobilization of joint task forces at the state level. We also saw the creation of civilian vigilante groups to support the government in dealing with Boko Haram.

These approaches have tended to be very militaristic. The government has also explored amnesty or suggestions of dialogue, but these have tended to be haphazard and ad hoc. Since this latest crisis, the government—in reaction to local, national, regional, and international urging—is now beginning to try to respond, but it’s very reactionary.

It’s also worth noting that in March, a month before the abduction, the national security adviser came up with a strategic communication plan—a soft approach, as he called it—to dealing with counterterrorism. That approach covers a range of issues to deal with what he calls the need to win hearts and minds, including working with communities to deal with the insurgency that Boko Haram represents, but also equipping Nigeria’s army to appropriately and professionally conduct military operations against the group.

How does all of this tie into the broader context in the Sahel region?

Well, one of the key questions people have asked is whether Boko Haram has any regional link to groups outside of Nigeria. In the report that we wrote last month, we explained both the external links and financial networks, and how some of those point to the region, particularly the Sahel. We indicated that Boko Haram benefitted from an association with AQIM and its splinter group MUJAO (Movement for Oneness and Jihad in West Africa) in Mali. These groups boosted Boko Haram capacities, particularly in terms of financial resources, military arsenals, and training facilities that were made available.

Those links do not necessarily remain solid today, but the key issue is that there are clearly—at least according to the Nigerian military—significant transnational links. The threat is greater for Nigeria’s nearer neighbors, such as Cameroon and Niger. In particular, Cameroon has seen more impact than any other country because Boko Haram has used the country as a rear base for its operations. And we’ve also seen Boko Haram linked to various kidnappings in northern Cameroon, very much extending its reach to that part of the country.

Nigeria currently has a seat on the UN Security Council and has requested that Boko Haram be added to the al-Qaeda sanctions list. What effect is this likely to have?

Well, it will certainly internationalize the threat that Boko Haram poses. There will be a recognition by the international community that the group is exactly what it is today—a pure terrorist group, thereby placing it in the same camp as al-Qaeda.

It’s worth noting that, last June, Nigeria proscribed Boko Haram and a splinter group Ansaru, labeling their activities as terrorism. As we noted in our report, it warned that any persons associated with the two groups would be liable to prosecution. And in 2012, the US named the group’s leader, Abubakar Shekau, and two other lieutenants as “specially designated terrorists.” So there has already been a move by Nigeria and the US to label it as a terrorist [group].

What other roles can the international community play to defuse this threat and to bring back the abducted girls?

What we are seeing right now is an important step: the international assistance, including surveillance and intelligence gathering, are important activities. And of course, the urgent priority is to secure the release of the abducted girls—we’re now in the second month. But we should also be careful, since a military intervention or the nature of a military exercise itself could exacerbate the situation. It’s clear that Boko Haram is now a regional problem, but it’s also clear that we have to tread carefully. The key, I think, would be to see a more concerted, coordinated regional strategy and response.

Potentially, what we saw at the Paris Summit last weekend was the beginning of a coordinated regional international strategy. That is important, because the weakest links so far have been any concerted or systematic effort at the regional level to deal with Boko Haram both nationally and regionally. So there, they are coming together on the international [level] to deal with this.

At the end of the day, as much as the role of the international community is important and is welcome and relevant, all roads lead back to Nigeria and Nigeria taking ownership of the problem and defining for itself what must be done to prevent groups like Boko Haram from emerging. Clearly there are a host of grievances that have allowed groups like this to fester, and the government needs to deal with this. It also needs to deal with a range of other issues around impunity, corruption, and bad governance, and to investigate crimes that have been committed both by Boko Haram, but also by state security forces.