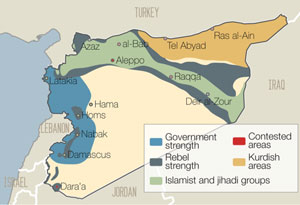 On April 29, thirty-five prominent legal experts stated in an open letter to the United Nations that delivering humanitarian aid across borders in rebel-controlled areas in Syria without the government’s consent is legal under international law, urging the world body to step up aid delivery to hundreds of thousands of people in desperate need.

This statement is significant as it lends authoritative credence to a progressive interpretation of international humanitarian law—an interpretation developed in this very publication exactly one year ago—and supports the argument of those who, since early 2013, have called for scaled-up crossborder humanitarian assistance from neighboring countries such as Turkey and Jordan. The argument goes that delivering aid across borders directly in rebel-held areas—as opposed to negotiating access across frontlines from government-controlled territory—would partly address the needs of 3.5 million people in the hard-to-reach areas that are mostly under opposition control, a figure reiterated in the latest report of the UN Secretary-General on the humanitarian situation in Syria.

However, on the very same day, a UN spokesman summarily dismissed this call by stating that “the organization [in accordance with its charter] can engage in activities within a territory of a member state only with the consent of the government of that state.” Rather than rejecting this significant call on purely legalistic reasons, one would have expected the United Nations to seize this opportunity to clearly explain the practical reasons why delivering aid across borders despite Damascus’ objection is no silver bullet to address skyrocketing needs, and could very well backfire.

The April 29 open letter is a significant development as it proposes a progressive interpretation of international humanitarian law (IHL)—also known as the law of armed conflict—true to its original spirit, that is to alleviate unnecessary sufferings in conflict and, thus, regardless of the nature of the belligerents. Indeed, it argues that, in order for humanitarian aid to be lawful, IHL only requires the consent of the party that has effective control over the territory of transit or destination—including a nonstate armed group—and not necessarily the consent of the government in whose territory the conflict takes place, if the latter does not exercise such control. In that sense, it significantly departs from the deeply state-centric nature of international law and opens up the possibility of humanitarian aid to be delivered directly in rebel-held territories in situations like Syria. It further emphasizes that, should consent be withheld for arbitrary reasons such as “to weaken the resistance of the enemy, cause starvation of civilians, or deny medical assistance” in violation of international humanitarian law, relief operations would be lawful without consent.

Such a progressive interpretation of the law by a large group of prominent legal scholars and experts is important as it might indirectly contribute to shaping international humanitarian law in the long term in a way that is beneficial to victims of armed conflicts by influencing international jurisdictions and possibly state practice. Indeed, although legal scholars do not make the law, it might facilitate the delivery of aid to populations who will find themselves in rebel-controlled areas accessible across borders in tomorrow’s Syrias or Sudans by giving greater authority to an interpretation of IHL under which assistance to and protection of civilians prevails over the requirement of state consent. However, in today’s Syria, removing the legal barrier of state consent is unfortunately no silver bullet to increased and more comprehensive humanitarian access, as a number of very practical barriers remain.

First, one of the main arguments of supporters of increased crossborder humanitarian assistance is that it would facilitate access to the Syrians most desperately in need of humanitarian assistance who happen to be mostly in rebel-controlled areas. It presupposes the bulk of this population can be accessed more easily across borders due to their proximity with neighboring countries like Turkey and Jordan, which hardly takes into account the much more complex reality of the conflict. While it is true that tens if not hundreds of thousands of civilians in need are living in villages, towns, and makeshift camps close to the border with neighboring countries, it is misleading to assert that driving trucks across the borders would allow bringing food and medicine to more than 3 million people, as a recent public advocacy campaign claims.

Although certainly well intentioned, such an approach fails to take into account that hundreds of thousands of Syrians are in areas deeper within the country—such as rural Damascus or around the city of Homs, the access to which requires going through front lines—while another 240,000 are stuck in besieged areas that, by essence, are encircled by the other party. This approach also fails to take into account the complex, volatile, and evolving security situation on the ground. Indeed, throughout Syria, humanitarian access is regularly curtailed not only by lack of authorization from the government but also due to active fighting, the fragmentation of rebel groups that makes negotiating access more difficult, and the growing presence and importance of radical jihadist groups that do not necessarily see aid actors positively. In that respect, it is worth noting that both the International Committee of the Red Cross and Médecins Sans Frontières have respectively three and five staff members who were abducted some months ago in northern Syria. While it would certainly allow expanding the coverage of humanitarian operations, increased aid across borders would not remove these very practical barriers linked to insecurity. For that matter, a recent study on potential cross-border assistance from Turkey to Syria points out that three out of nine border crossings are under the control of the Islamist State of Iraq and the Levant, a radical Islamist group, while several areas accessible from other border crossings are too insecure to realistically consider delivering aid.

Secondly, delivering aid in rebel-controlled areas directly across borders without the consent of the government would expose UN agencies and other humanitarian organizations operating from Damascus to potential reprisals and risks jeopardizing their work. In the first place, it shouldn’t be ruled out that the regime directly targets aid convoys or orchestrates “security incidents” that could put aid workers’ life at risk. This would be a clear violation of IHL but the history of this three-year-old conflict has shown that respect for the law is not a primary concern of the Assad regime. Even if the regime restrains from directly targeting aid convoys, it is likely that it would react by expelling humanitarian organizations operating from Damascus, or considerably constrain their work. Far from being a mere hypothetical risk, the government has already threatened expulsion of an international NGO on suspicion that it engaged in crossborder activities, according to the latest UN Secretary-General report to the Security Council.

Yet, for all its flaws and limitations, the work carried out by humanitarian organizations from government-controlled areas remains crucial and vital for millions of Syrians. First, and as mentioned above, access to hundreds of thousands of civilians in opposition areas is only possible through government-controlled territory. Operating across borders despite Damascus’ objections might therefore improve access to populations badly in need, but remove all hopes of accessing others that equally require assistance. Second, this might also deprive populations living in governmental areas of any assistance they are also in need of, although arguably not as badly as on the other side of the frontlines. Finally, it might jeopardize important humanitarian activities that are carried out from and within government-controlled areas but eventually benefit the entire Syrian population, such as reparation and maintenance work on water and sanitation facilities in urban areas like Homs or Aleppo that allow millions of Syrians on all sides to access potable water.

In conclusion, this open letter should be welcomed as it has the potential of advancing a progressive interpretation of IHL and it reminds us of the importance of delivering humanitarian aid by any possible ways, including across borders. It is true that expanded crossborder humanitarian assistance has the potential of reaching tens of thousands of Syrians in desperate need—albeit not all of them and under tremendously challenging security conditions—but doing so without the consent of the Syrian government presents the risk of depriving even more people of this lifeline.

This does not mean, however, that delivering more aid across borders shouldn’t remain a priority, and efforts by some aid organizations in that respect are important and worth noting. But for organizations working from Damascus, other creative ways should be explored to secure the government’s consent—such as dispatching Syrian liaison officers in neighboring countries responsible for monitoring aid convoys—rather than pursuing a hazardous option that is uncertain to deliver the expected results.

Jérémie Labbé is a Research Fellow in Humanitarian Affairs at the International Peace Institute.