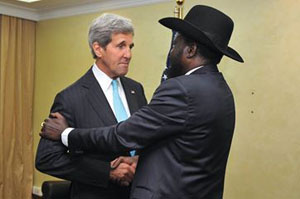 South Sudanese President Salva Kiir greets US Secretary of State John Kerry before their meeting in Juba, South Sudan, May 2, 2014. (US State Deparment)

The South Sudanese people “want peace, unity, institutional reform, reconciliation, and development,” said Anyieth D’Awol, founder and director of Roots Project South Sudan, adding that the United Nations and the international community should think realistically about the possible scenarios for reconciliation and peacebuilding.

“Is [peace] going to be possible under the conditions that are being created right now? I think everybody needs to ask themselves those questions and be honest, because the people of South Sudan are depending on it,” Ms. D’Awol said.

Ms. D’Awol and David Deng, Research Director for the South Sudan Law Society (SSLS), both said in this interview with the Global Observatory that civil society can help address the root causes of conflict in their country; in addition, the international community plays a crucial role in maintaining pressure on leaders to end the current fighting. Mr. Deng said international actors are needed to make sure “certain minimum standards are adhered to, that amnesties are not a part of any agreement that comes out of the process that is underway in Addis Ababa, and that accountability features into the process.”

“One thing is for sure: if we leave it to the parties, these issues won’t be addressed. It really requires sustained commitment and push on the part of international actors,” said Mr. Deng.

The conflict, which began December 15,  has left thousands dead and displaced more than a million people.

As for addressing the root causes of the conflict, Mr. Deng said civil society can be instrumental in addressing these issues, and he cited constitutional reform as an example. “What we in civil society have done in the past few years around the constitutional review process is light years ahead of what the government has accomplished in the same period of time, so I think we have established capital which we can use to invest in some of these processes and make them successful.”

Mr. Deng said the country has long suffered from core governance crises, “starting with an almost complete inability to deliver public services.” He said there were high expectations set for South Sudan after the war ended in 2005 and the country gained independence in 2011, “but the government has utterly failed to deliver on any of those [core] issues, including abuses committed by the security sector, most of which started long before December 15.”

The interview was conducted by Adam Smith, IPI Senior Fellow and Head of IPI’s Center for Peace Operations.

Adam Smith: Today, I am joined by two members of the civil society of South Sudan. David Deng, who is the research director for the South Sudan Law Society (SSLS), and Anyieth D’Awol, who is founder and director of the Roots Project South Sudan.

The first question I’d like to ask to both of you is: Could you outline some of the root causes of this ongoing conflict in South Sudan? And specifically, how did these connect to the role that civil society organizations can play in restoring peace?

Anyieth D’Awol: I think the root causes are many. We have tribalism, we have corruption, we have impunity, we have the previous war, we have lack of development, and a whole range of issues that basically highlight how everybody, at all levels, is involved and can be involved in reversing these issues. So, the work that we have to do as civil society is a multi-faceted and multi-layered one, so that we can resolve the problems that caused this violence.

Adam Smith: David, what role can civil society play in this process, given some of these causes that Anyieth outlined?

David Deng: I think that sometimes the causal factor is not the most important thing, as conflict can be triggered by anything, such as land dispute, or, in this case, a political dispute within the ruling party. But the real question is: what are the factors that allow the conflict to proliferate and to become entrenched? And I think there we go to some of the real core governance crises that the country has been suffering with for nearly a decade now, starting with an almost complete inability to deliver public services.

There are high expectations for what the end of the war in 2005 and independence in 2011 would mean for the South Sudanese, but the government has utterly failed to deliver on any of those issues including abuses committed by the security sector, most of which started long before December 15.

Issues like the constitutional reform process are really basic problems which have set the stage for the conflict. And in order to bring the conflict to an end in a way that is sustainable, they need to be addressed. I really think that civil society has a unique role to play, in that these are the issues that we are most familiar with, as we have been following them for many years.

Take the example of constitutional reform. What we in civil society have done in the past few years around the constitutional review process is light years ahead of what the government has accomplished in the same period of time, so I think we have established capital which we can use to invest in some of these processes and make them successful.

Adam Smith: Previous peace agreements in South Sudan have largely been the exclusive affairs of the elite and often of the warring parties. Does that need to change this time around, and how can it change?

David Deng: Certainly, that is one of the fundamental shortcomings of past peace processes. We see the same people who are left out of past peace processes in South Sudan are the very same ones who are instigating and promoting this conflict. Other armed groups who were not involved in the negotiation of the Comprehensive Peace Agreement in 2005 are the ones who haven’t been included as part of the whole process up until now. And the ownership of the peace has been for the SPLA, which has been a tremendously divisive factor in South Sudanese society.

Therefore, this time around, I think there is a general recognition that the process must be inclusive, that it must involve other groups—not just armed groups, but other groups who do not use violence and force as a way of getting what they want. There must also be the recognition that incentivizing violence as the only way for you to have voice within the system is just going to incentivize more militarization of society. I think there is at least an intellectual recognition that something needs to be done differently, but, of course, the devil is in the details, and the challenge will be for IGAD (Intergovernmental Authority on Development), for the African Union, for regional and international organizations to make sure that it happens in practice. They will need to give the support that is necessary for this to happen in a meaningful and inclusive way.

Adam Smith: Women have been specifically targeted as part of some of the conflict in South Sudan. On the other hand, women have often been a force for bringing communities together among the South Sudanese. What barriers do women face in participating in the peace process this time around, and in peacebuilding more generally?

Anyieth D’Awol: The role of women in South Sudan has always been limited, unfortunately. Women were the ones responsible for the reconciliation of the SPLM (Sudan People’s Liberation Movement) in the 1990s and also played a very active role in the Comprehensive Peace Agreement, so it is a shame that they are always sidelined. Women are the most vulnerable, women are the most silent, women are some of the most hardworking people within the communities.

I also think the support that goes to women has to be on different levels so that we can have something more sustainable even after the peace process, when women’s role will still have to be fair.

Adam Smith: Now, a question for both of you. The UN has been intimately involved in Sudan and in South Sudan since its inception. What is the most critical step that international actors, including the UN, can take to help restore peace and stability in South Sudan and then move forward with meaningful reconciliation and peacebuilding?

David Deng: I think the steps they have taken thus far should be acknowledged, and credit should be given where it’s due. We’ve seen the secretary-general travel to South Sudan recently, and immediately before that, Secretary of State John Kerry. So there’s this huge diplomatic push which was instigated in part because of the recognition of the looming catastrophe in South Sudan, not just with people being killed as a direct result of the conflict, but because of the worsening humanitarian situation and the very real risk of widespread famine.

So I think keeping up this diplomatic pressure, keeping the pressure on the parties to agree and to stop the violence and to provide access for humanitarian support, all of that can’t be understated. Also, there needs to be support for different initiatives that are underway: the mediation process needs support, the Commission of Inquiry, which was recently announced by the African Union into violations of human rights and humanitarian law, [needs support].

I think there is a very critical role that the international community can play in terms of providing support to making sure that certain minimum standards are adhered to, that amnesties are not a part of any agreement that comes out of the process that is underway in Addis Ababa, and that accountability features into the process. One thing is for sure: if we leave it to the parties, these issues won’t be addressed. It really requires sustained commitment and push on the part of international actors.

Adam Smith: Anyieth, anything to add on the role of international actors and how they can support this process moving forward?

What are the possible scenarios based on the political arrangements, the security arrangements? Is it going to be possible to deal with reconciliation in the various options that we have in the power-sharing? The pressure has to come from way up there in order to give us the chance, in order to have a country that we can actually live in. I think that’s one of the most important things that the international community needs to focus on, because pushing for a peace agreement that we have already seen with the same people that we have seen before, is not speculation. This is here and now, and we have all the evidence pointing to “this is what happened.” So, we can’t do the same thing, and we can’t be silent, and as civil society, we want to see the things that we want to see: we want peace, unity, institutional reform, reconciliation, and development.

Is it going to be possible under the conditions that are being created right now? I think everybody needs to ask themselves those questions and be honest, because the people of South Sudan are depending on it.

Smith: Anyieth D’Awol, David Deng, thanks for joining us today.