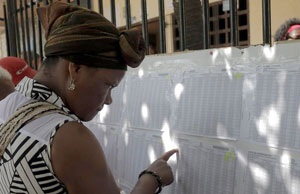 A woman outside a polling place in Colombia during the presidential election, May 25, 2014. (Globovision/Flickr)

This past weekend saw a bitterly contested first round of voting for the Colombian presidency. While registering a low voter turnout, the presidential campaign was described as among the “dirtiest” ever and included a relentless trading of insults and accusations between the two principal candidates, the right-leaning Oscar Ivan Zuluaga and the current President Juan Manuel Santos, including allegations of illegal cyber-surveillance and dodgy financing schemes. Notably missing from this discourse was a nuanced discussion about the issues that matter to most Colombians, not least the peace deal.

Yet the entire electoral race was framed by this defining issue in Colombia—the ongoing peace negotiations between the government and the country’s oldest and largest insurgent group, the Revolutionary Armed Forces of Colombia (FARC). This is hardly surprising: the FARC and the Colombian state have been at war since the 1970s, and there are signs of a peace deal emerging from ongoing talks in Cuba. But not everyone supports the peace process: the current front-runner, Zuluaga, is strongly opposed, while President Santos, a former hardline defense minister, is one of its most ardent advocates. Each side accuses the other of being either a spineless pacifist or bloodthirsty warmonger.

Once colleagues in a previous administration, the two candidates could not be more different. For his part, President Santos initiated peace talks about 18 months ago and has actively sought to bring the country’s four-decade civil war to an end. On the other is Zuluaga, heir to the former President Alvaro Uribe, and a zealous advocate of a military solution to the long-running armed conflict. And while international and domestic media attention has honed in on personal rivalries and scandal, it has completely neglected the left wing and green contenders. This is a shame, since many of their proposals warranted a hearing.

Predictably, the presidential elections have been described as a referendum on the peace agreement. In other words, a vote for Zuluaga is described as a vote against the negotiations, while a vote for Santos is a vote in favor. While this makes good press copy, it does no good for Colombian democracy. To those familiar with Colombian politics, the results of the first round were not entirely surprising. Most citizens abstained from voting—roughly 60% of them in all. And because neither Santos nor Zuluaga won more than 50% of the vote, the final outcome will be determined after a run-off election in June.

Yet dichotomous narratives of “absolute truth” conceal the genuine complexity of Colombia’s civil war and undermine the prospects of bringing it to a close. As with peace negotiations the world over, an agreement is the beginning, not the end, of a durable solution. It can help eliminate what one does not want, and yet it can’t guarantee a particular outcome. To be successful, any peace agreement must be accompanied by robust social and economic policies to compensate for the damages wrought by years of bloody confrontation. It is not just through a compact but through practical dividends that conflict recurrence can be avoided.

When a negotiated settlement fails to comprehensively address the drivers of armed conflict, political and criminal violence often persists long after the ink dries on the deal. It can be waged by the very same armed actors, with the same objectives and methods applied during wartime. Research shows that poorly conceived peace agreements can unintentionally “freeze” a conflict, either because measures to address the root causes are not included in a settlement or because power relations do not allow for significant reforms and changes. At a minimum, Santos should pursue a comprehensive and inclusive agenda while offering guarantees that the current peace accords are sustainable.

Meanwhile, the unilateral approach advocated by Zuluaga and his admirers ignores the dynamics of Colombia’s armed conflict. Scholars such as Kalyvas have shown that the causes of violence in civil wars are not necessarily the same as the causes of civil war. It follows, then, that a universal ceasefire will not necessarily result in a successful accord. As peace mediators from the Americas to Africa and Asia know all too well, violence often accompanies the process of peacemaking. During negotiations, violence can be used by spoilers and elites who fear that peace might threaten their power, influence, and interests.

Ultimately, the successful resolution of Colombia`s long-running conflict demands comprehensive and nuanced proposals. The process cannot be reduced to simple us-them narratives, or a means of securing votes. If it is, the negotiations run the risk of being partially completed or even prematurely terminated. Likewise, hard as it is to stomach, Colombians should expect some degree of violence during negotiations. Even so, the future of Colombia’s presidency may ultimately depend on what the FARC does next. If they take up arms over the next four weeks, then President Santos’ fight for peace will likely end in Zuluaga’s return to war.

Katherine Aguirre Tobón is an Associate Researcher at the Igarapé Institute.