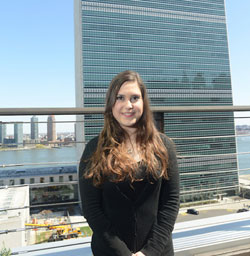 Nour on the balcony at the International Peace Institute, with the UN Secretariat building in the background. (Don Pollard)

Nour is a 15-year-old board member of the Children’s Council in Lebanon, a council that, among other accomplishments, contributed a child-led report on children in conflict to the United Nations Human Rights Council in Geneva. Nour recently spoke at the launch of the Guiding Principles on Young People’s Participation in Peacebuilding at the International Peace Institute in New York. Nour was interviewed afterwards by Andrea Ó Súilleabháin, Policy Analyst at the International Peace Institute, and the following are some of Nour’s remarks on these topics. Nour’s last name has been redacted to protect her privacy.

Peacebuilding and political processes in Lebanon

My country suffered a long and tough war, and we can still feel its consequences, even though the civil war ended some time ago. Young people are the new generation; they’re creative, enthusiastic, and they want change.

Without peace, we can’t achieve other goals. My generation wants peace. I think that youth always have bright ideas and new things to say. It’s important that children and youth are listened to, and that young people and adults talk and listen to each other. Two years ago, I was elected as a board member of the Lebanese Children’s Council, and now it’s my responsibility to represent the views of other children.

I want to tell you about something I was a part of this year. In Lebanon, there are child-friendly spaces for Syrian refugee children. These children came together to write a child-led report where they discussed the problems they face in the host communities in Lebanon and Jordan, at different levels—in the home, at school, in the community, and in the countries they moved to. We, the members of the Lebanese Children’s Council, met with the Syrian children—despite all the conflicts that arose between Lebanese and Syrian people due to the crisis. We wanted to break the ice created by the political situation, and to share with each other what we hope for. To show the Syrian refugee children that we can make peace together and build on it for a better future.

The work of the Lebanese Children’s Council

The Children’s Council in Lebanon is a group of children from nine to eighteen-years-old, created by World Vision Lebanon, with the main goal of giving children a voice. The members come from different backgrounds, religions, areas, and from time to time they meet, and they go to workshops to learn skills like public speaking and to learn about issues like violence, discrimination, and the Millennium Development Goals.

We organize different activities and campaigns to raise awareness about many problems that affect our lives. Children and youth take full leadership to prepare and conduct all the activities. Once we went to the Lebanese Parliament, and we spoke about our problems to the government.

All of the activities done by the Children’s Council are child-led, but we can always have the help of adults. Board members are elected every two years, to open the doors and give the opportunity to all the children to have such a great experience, and to raise the others’ voices.

The biggest challenges in Lebanon today

You know, one of the biggest challenges in Lebanon is that we don’t have peace, because of the political situation. And we always have conflicts that affect children.

A big part of the conflicts in Lebanon is caused by religious differences. The Children’s Council consists of children from many different backgrounds and religions, and we try to accept our differences and work together to build peace. Peacebuilding can value and build upon young people’s diversity and experiences. The Children’s Council gave us a place where we can come together, learn about our differences, and accept each other. We produced a photo advocacy book to raise awareness, through pictures and quotes, to raise awareness to end discrimination in Lebanon.

Gender equality is also present in the activities we do, and it’s a big challenge for my country. In Lebanon, girls are not treated the same way as boys. But in the Children’s Council, we make sure we have the same number of girls and boys, and that they can both participate. This gives girls more confidence and opportunities to share their points of view.

We had two consultations for young people on the post-2015 development agenda, one in Turkey and one in Lebanon. First, all the board members went to Turkey and attended this conference, and then we went back to Lebanon. We met with many children from groups around Lebanon. And we spoke about the MDGs and local challenges in Lebanon.

Then, in small groups, we made lists of problems that our generation faces in Lebanon–and ultimately we voted for the top five problems that are important to address. The five problems we chose are: violence and sexual abuse; discrimination; refugees; drug abuse/poverty; and finally, the lack of child-led participation, which is why we’re here.

We also discussed possible solutions. We wrote these in a letter to Her Majesty Queen Rania Al-Abdullah of Jordan, and we made a video message for her. We felt very lucky when she replied to us, saying that she’ll raise our voice in the United Nations.