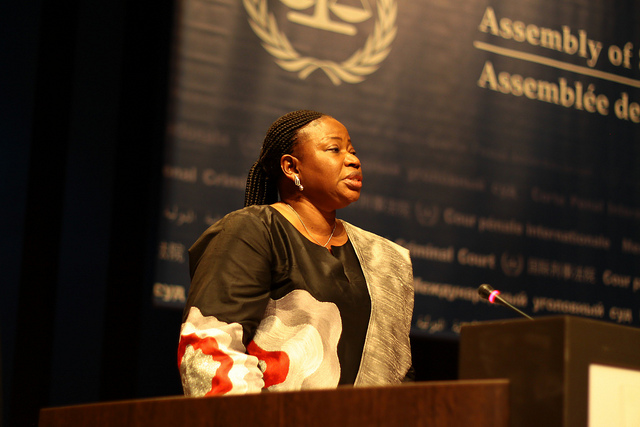 As massive human rights violations, ethnic killings, and large-scale displacements of populations take place in the Central African Republic and South Sudan, efforts to improve accountability for serious international crimes on the African continent continue to be affected by the rocky relationship between the International Criminal Court (ICC) and the African Union (AU).

Richard Dicker, Director of Human Rights Watch’s international justice program, spoke to John Hirsch, Senior Adviser at the International Peace Institute, about the latest developments between the ICC and the AU, opportunities for overcoming the recent discord, and recommendations for ending violence and ensuring accountability in the Central African Republic and South Sudan. What follows is an edited version of their conversation.

Richard, last year the African Union called for the deferral of cases against the presidents of Sudan and Kenya by the ICC and encouraged African member states to speak with one voice against the prosecution of serving African heads of state by the ICC. There was even some discussion of possible withdrawals from the ICC by African member states, none of which have happened.  Where do matters now stand?

Well, an important question with a complex answer. At the initiation of the African Union, there was a vote held at the UN Security Council on November 15th, 2013, brought by Rwanda—an elected member of the Council—to have the cases against Kenya’s president and deputy president suspended. That resolution, interestingly enough, was clearly headed to rejection. Rwanda insisted on bringing it to a vote in an effort to try to increase the political price paid by the majority of states who ultimately voted against it.

The next step in the ongoing contention occurred at the ICC’s Assembly of States Parties, which was held in The Hague at the end of November, just ten days after the Security Council vote. At that session, there was a plenary discussion that resulted from a request by the African Union for debate or conversation over its and some African members’ concerns about the International Criminal Court. That was an unprecedented development. I think the upshot of that discussion was quite positive and it gave everyone a chance to air their views.

The other upshot from that meeting of the Assembly was the adoption of a few amendments to the rules of procedure and evidence that allowed greater flexibility for the accused not to be present for the entire duration of their trial. I think the decision-making authority of whether to grant a request for leave from the day-in, day-out attendance remains in the hands of the judges, and that’s a positive thing. The unfortunate upshot was that the language that created this possibility could be interpreted to create two tiers of justice: one for senior officials and one for everyone else. But ultimately, it’s up to the judges.

As to [the issue of] withdrawal, significantly, no states have withdrawn from the ICC. I think that was a bit of bluff intended to send fear into the hearts of other state parties that Africans would leave the court.

Some reports suggest that the meeting of the Assembly of States Parties of the Rome Statute last December also discussed whether formally or informally the idea that the next president of the Assembly will be an African. First of all, is that accurate? And secondly, how significant is that likely to be?

Well, first, there is a rotation among regions that make the initial choice as to selecting the president. This year, or for the next three years, it was the turn of the African group of state party. So it wasn’t a decision taken at the Assembly itself, it followed a regular procedure.

Second, in terms of the significance, I think it’s a great thing, or could be a very positive thing and there are, interestingly, three very qualified candidates. We’ll see how, whoever is elected, handles what is a complex, challenging mandate. I’m optimistic that it could be a good thing for the Assembly of States Parties, for the court, and for the court’s relationship with Africa.

The International Criminal Court is an international legal institution, whereas the African Union is a continental political organization. Thus, they’re very different from each other.  Given this recent set of discussions, what steps or initiatives do you think that either the ICC or the African Union can take to overcome the recent discord and also to strengthen jurisprudence on the African continent?

I also think that African state parties that are committed to the fight against impunity could help dial down some of the negativity that a few—I’m thinking Sudan, I’m thinking more recently the government of Kenya—have ratcheted up, directed against the court for their own reasons or for the rationales of their various heads of state. I think that could take the form of allowing the court, as it has requested, to open a liaison office in Addis Ababa on the site of the African Union.

Lastly, I think the court could up its game in communicating in Africa, both with governments and civil society, what the limits of its mandate are, what it can and cannot do.

Finally, massive human rights violations, ethnic killings, and large-scale displacements of populations, as you know, are taking place in South Sudan and the Central African Republic. In both cases, these crimes are being carried out with impunity. What are the recommendations that you have or that Human Rights Watch has for some immediate effective action to stop the violence and to assure accountability?

I think there are two different issues embedded in that question. The first, as you suggested, is immediate action to stop the violence. I think one step would be maximum political pressure on those responsible at the top in both country situations to halt the abusive, if not egregious, practices their own forces are engaging in. I think the bolstering of the United Nations’ peacekeeping role and encompassing protection of civilians as a key part of that peacekeeping role are absolutely essential for the Central African Republic. I think the deployment of a UN peacekeeping mission—some of whose contingents have been doing an admirable job trying to protect civilians at risk—will “re-hat” the African Union force on the ground. I think those two steps are necessary in terms of ending or greatly limiting violence day-to-day.

In terms of the second prong of the question, ensuring accountability, I think that in regard to CAR we would encourage the prosecutor of the International Criminal Court, who has jurisdiction over CAR because it is a state party to the ICC treaty, to open a second investigation. She already has one ongoing in CAR. We think given the events since March of last year, the alleged crimes amount to rationale for opening a second investigation.

We think more will be needed domestically in creating specialized units, prosecutorial units, and judicial units in Bangui that could, on a domestic level, look into the most serious crimes. In South Sudan, we are awaiting the report from the African Union-initiated Commission of Inquiry to see what findings they have. We have asked for an investigation—I believe it’s happened—into breaches of security with a toll on civilians who were seeking refuge in UN compounds in South Sudan.  That investigation would be supplemental, pending the results of the AU Commission of Inquiry. Then, we would expect recommendations from the AU that would call for accountability for those responsible for the most serious crimes.

I think the ultimate judicial mechanism to be utilized in this situation has got to be thought through a bit more carefully. And of course, South Sudan, unlike CAR, is not a state party to the ICC treaty and, were the ICC to be designated with the judicial mandate there, it would require Security Council referral.