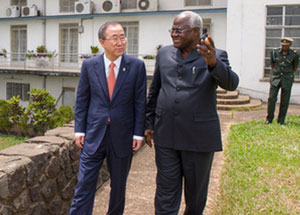 The closing of the United Nations Integrated Peacebuilding Office in Sierra Leone (UNIPSIL) on March 31, 2014 was a celebrated milestone in the UN’s work in the small West African country. The UN took over from the Economic Community of West African States in 1999 as a result of the Lome Peace Agreement, and helped end a long civil war; 15 years later, the UN reports that Sierra Leone has shown remarkable achievements in the strengthening of institutions and in safeguarding stability and promoting democracy.

UN Secretary-General Ban Ki-moon used Sierra Leone as an example of one of the most successful post-conflict recovery, peacekeeping, and peacebuilding processes in recent years. UNIPSIL showed that steady engagement, assistance in the development of capacities, and engagement with local and national leadership can effectively support peacebuilding in a country. Thus, the withdrawal of the mission is an important indicator that the process is increasingly less in the hands of external actors and more in the hands of Sierra Leone nationals. And for that, there is still a lot of work to be done, as Sierra Leonean actors themselves recognize.

In a previous paper, Cedric de Coning, Leslie Connolly, and I presented some ideas on how external actors can support and contribute to resilience in peacebuilding processes. In that paper, we argued that the peacebuilding environment can be supported by stimulating the development of institutions that are sufficiently resilient, in a process that should be inherently led by national actors. And in this context, we stated that it is important to recognize that peacebuilding is often an irregular process; thus, external actors should identify ways in which to deal with the complexities of its non-linear nature.

The UNIPSIL withdrawal presents a good opportunity for the country to ensure processes are more nationally led. Without the UN, Sierra Leone plans to continue consolidating its peacebuilding process through the implementation of frameworks that are set to address potential sources of fragility in the country. The government has stated that it aims to reach a middle-income country status within 25 years through its Agenda for Prosperity, sending a message that it wants to engage in a nationally led process to address the underlying conditions that led the country into conflict and fragility.

The aspects of the national development planning process, exemplified by the Agenda for Prosperity, was particularly influenced by the fragility assessment conducted by the country in the context of the New Deal for Engagement in Fragile States. In this process, the country identifies that while it has made considerable progress making society more resilient and less prone to conflicts, it acknowledges that the process is not yet complete.  Sierra Leone sees itself somewhere in the middle of the process—in a “transition stage”—where there are still several structural issues in the country that need to be appropriately addressed. In particular, the fragility assessment makes reference to three particular challenges:

• Challenges in governance processes, leading to lack of consistency and effectiveness;

• Capacity constraints, particularly in relation to limited resources, personnel and skills; and

• Differences between different various regions in the country, with conditions varying dramatically across Sierra Leone.

Peacebuilding is not an event, but a process, and it takes time to create social institutions that are resilient and sustainable. The fragility assessment, thus, provides a national assessment of the situation that sees peace as part of a broader continuum and provides strong evidence for the need to ensure continuous support to avoid the relapse of conflict and support the long-term development path. It acknowledges progress made, but stresses particular remaining goals related to its peacebuilding and development path.

Sierra Leone is a good example of how continuous support can help to produce success stories, and the withdrawal of the United Nations mission presents an important benchmark within the larger peacebuilding process in the country. However, we should not forget that many other steps have yet to be achieved by the country, and that international actors have to continue supporting Sierra Leone in leading their processes. And while the international community should be praised for doing good work in the country, they should now try a very different role—that of supporting a country’s peacebuilding process without being in the driving seat.

Gustavo de Carvalho is a Senior Researcher at the Conflict Management and Peacebuilding Division at the Institute for Security Studies.