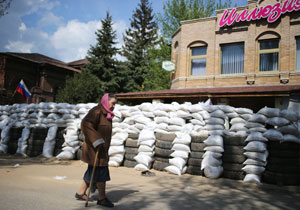 With the Geneva deal—signed on April 17 by the acting government of Ukraine, the US, Russia, and the EU—already unraveling, the ongoing crisis in Ukraine shows no signs of resolution in the short-term. Although parts of the Maidan camp in Kiev have started to be cleared, there has been no significant disarmament of the groups involved. Likewise, in the east, although “Republic of Donetsk” flags have replaced Russian flags at the various buildings seized by “pro-Russian” forces, there have been no steps to disarm or end the occupations. Neither side wants to be seen as blinking first. The longer this stand-off continues, the greater the risk that the divisions of recent months will harden into permanent fault-lines and doom Ukraine to a bitter and potentially violent disintegration. Already there have been killings on both sides around the flashpoint town of Slavyansk.

Regardless of the provenance of the “little green men”—the sardonic term used to describe the well-trained and well-armed militants at the heart of the unrest—the reality is that Ukraine is increasingly a country divided. Crimea is already lost, and speaking to people at a defense and security cooperation conference in Kiev last week, none saw the return of the peninsula as a realistic prospect. However, those with relatives in the east and in Russia described a hardening of views against the new government in Kiev. The image of fascists and anarchists roaming the streets in western Ukraine is taken for granted by many. The ill-thought-out attempt to repeal a language law allowing Russian speakers to deal with officials in their native language coupled with the failure of the new government to reach out to the eastern regions has only served to harden this image. Even in a country where bilingualism has been the norm rather than the exception, an ethnic dimension to the conflict cannot be ruled out. One of the lessons of the break-up of Yugoslavia is that long dormant and even non-existent ethnic divisions can become a virulent force in times of conflict.

A second important theme to emerge from talking to people in Kiev was the idea that the West has consistently misread Putin. “Americans don’t watch Russian TV,” as one person put it, referring to the growing nationalism in Russian media over the past few years. The West has tended to equate Russia’s economic weakness with strategic weakness, when in fact, combined with the rise of Russian nationalism centered on an imperial past, the opposite is the case—if Russia cannot compete economically, then it may be more likely to exercise its power using asymmetric strategies in both the military and the media.

Understanding Russia’s motivations and goals is the most difficult challenge here. On the one hand, Russia can be seen as acting out of weakness—in November, Moscow had good reason to believe that all of Ukraine would be part of its Eurasian Customs Union in return for a €15billion bailout. The fall of Yanukovych has forced Russia to react; however, although it may now be following a contingency plan, it most certainly is a plan. If the ongoing actions in eastern Ukraine and the troop mobilizations on the Ukrainian border were planned as a feint to push the Crimean annexation off the agenda, then these have already been successful. The question is: how far does Russia really want to go?

By contrast, the EU and US have been caught flat-footed by both the speed and decisiveness of the Kremlin’s actions. The EU was caught by surprise when Yanukovych reneged on the Association Agreement last November and again when he fled the country hours after signing an EU-brokered peace deal on the 21st of February. Both the EU and US were caught off-guard by the Crimean annexation and appear to be having difficulty in responding to the continuation of Russian’s strategy in other parts of Ukraine. The sanctions policy pursued by both, with its emphasis on de-escalation and limiting the macro-economic implications, has not to date proved effective in limiting Russia’s freedom of action.

From Kiev’s perspective, the US, Britain, and France have moral—if not, strictly speaking, legal—obligations to defend Ukraine’s territorial integrity stemming from the 1994 Budapest memorandum that led to its unilateral nuclear disarmament. The problem is that Ukraine is viewed as neither a strategic priority nor a major economic partner for the US or the EU member states, whereas Russia is one or both. At present, it seems the EU is neither capable nor willing to take more decisive action, and although the US may be capable, it does not appear to be willing to do more than raise the rhetorical temperature. Even the Baltic states and Poland, NATO allies, have found American assurances wanting in current circumstances.

The initial reports of the Organization for Security and Co-operation in Europe (OSCE) from Ukraine confirm the sense of division–a festive atmosphere in western Ukraine coupled with simmering tensions in the east. The success of separatists, first in Crimea and to date in Donetsk, highlights the weaknesses, both doctrinally and in terms of capabilities, of Ukraine’s own security services, and, in the east, their questionable loyalty to the acting government. The presidential elections are being held up as a possible turning point, marking the moment when questions of legitimacy will be pushed to one side. However, few in Kiev expect the elections to take place without problems, if at all.

Crimea is gone; Donetsk is slipping. The government in Kiev is faced with the difficult task of trying to maintain the remaining territorial integrity of the country while not using tactics that would feed into Russian propaganda and push other wavering districts into Russia’s open arms.

Dr. Ken McDonagh is a Lecturer in International Relations at Dublin City University, Ireland. He is currently on research leave and is a Visiting Research Fellow at the Central European Policy Institute in Bratislava, Slovakia.