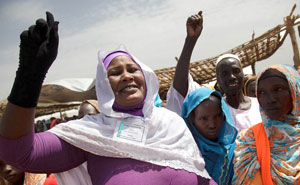 A delegate to the UN Special Envoys for Sudan Retreat, October 20, 2011. (UNAMID/Olivier Chassot)

To increase women’s participation in peacebuilding, they need to be encouraged to stand up and take on leadership positions in every sphere of their lives, said Akinyi Walender, director of women’s leadership at Cordaid, an international development organization.

“Very often, leadership is defined mainly within the sphere of politics,” said Ms. Walender. “Yet there are so many women who are taking the lead and doing amazing things in their lives. “

Ms. Walender said local women should be given the space and voice to become leaders. “There are lots of women who are engaged in peacebuilding, driving reconciliation, and also preventing conflict in their communities. They need support,” she said. “One of the ways that the UN—and, actually, international organizations and civil society—can be more responsive to local women in peacebuilding is to just give them support, give them the voice, and the recognition.”

“We need to create space for them to engage in political participation, because the more women we actually get into the legislature—this is where laws are made—the more we will begin to see a friendlier environment for women to engage in,” she added.

In the negotiations that led to the Comprehensive Peace Agreement in 2005, “They were at the table, and they managed to negotiate for a 25-percent affirmative action [quota] for women, but they went on also to mobilize women for the referendum,” Ms. Walender said. “And that particular referendum was actually really decided by women, because they came out in large numbers and they voted for a new country.”

Another way to increase the numbers of women in peace processes, said Ms. Walender, is to create “very clear, specific numbers that are defined for women to participate in, and if this does not happen, I think that our donor countries should not fund the processes.”

The interview was conducted by Andrea Ó Súilleabháin, Policy Analyst at the International Peace Institute.

Akinyi Walender: South Sudanese women have been very, very involved in the peace process. They were a very big part of the negotiations on the Comprehensive Peace Agreement, and before that in initiatives to bring and end to war in their country. They were at the table and they managed to negotiate for a 25-percent affirmative action [quota] for women, but they went on also to mobilize women for the referendum, and that particular referendum was actually really decided by women because they came out in large numbers and they voted for a new country. After that, the South Sudanese women also continue to engage on the constitution-making process. Now they have women who are now sitting on the constitution review committee.

AOS: After the recent outbreak of conflict, a group of South Sudanese women came together to call for greater representation of women and civil society in the current peace negotiations in Ethiopia. How can they gain a larger role?

AW: Well, the outbreak of the war in South Sudan was a real big jolt and a very unfortunate occurrence because so many women have died, so many more of them displaced, and others lost their children. South Sudanese women have basically had enough because they bear the brunt of every conflict when it happens.

But on the other hand, women are also very strong. If you look at South Sudanese women over the years, they are the ones who really supported this war despite all the challenges that they experienced; they carried guns, fought alongside the men, bore children, and cultivated food for the soldiers. And that is why women mobilized and decided that they needed to be in the peace process in Addis Ababa. They needed to share the experience they have been going through because of the war, but more importantly, they needed to make sure that their interests are actually on the table and included in the outcome of the peace process. South Sudanese women, of course, can gain a larger role by articulating their messages, having a common agenda and actually getting space to participate within the peace process to be able to put their perspectives and demands forward.

AOS: According to UN Women’s statistics, women are just seven percent of delegates to peace negotiations, four percent of signatories to peace agreements, and two percent of chief mediators. Why does their representation at the peace table remain so low and what can be done about it?

AW: I think one of the biggest problems is the whole definition of “parties to conflict.” A lot of times women are not identified as parties to conflict, but the truth is that women are part and parcel of these warring communities. Some of them actually do have a role to play in some of the actual conflict, but this is not recognized. The fact that they are caught within the space where conflict occurs makes them parties to the conflict because of the disruption conflict causes to their very lives, it means they have a big stake in the peaceful resolve of the conflict.

The other problem also has been that peace processes and peace negotiations have been seen very much as a male domain, and women have not been accorded that space to participate in any way in defining the outcome of the peace deals.

Mediation takes skills, you know! There’s negotiation, there’s communication etc. These are skills that women need—but more importantly, they need the space to be on the table. That space has not been opened up, but we need to really work to have these spaces opened up. One of the things that we could do is lobby the donor countries that fund peace processes to ensure that women’s participation is part of the funding deal.

One of the stipulations we could push for, and we should push for, is a definitive quota put aside for women at the negotiation table. For peace processes and for women to get involved there needs to be very clear, specific numbers that are defined for women to participate in, and if this does not happen, I think that our donor countries should not fund the processes.

AOS: Your work with Cordaid supports women peace leaders on the local and international level. How can international institutions like the UN be more responsive to local women who are building peace, driving reconciliation, and preventing conflict in their communities?

AW: I would like to start by commending the UN for their efforts; however, a lot more needs to be done. I think the UN has done quite a lot and especially on resolutions, like resolution 1325. This gives an opportunity for women’s voices to be heard. It gives an opportunity for women to really look at their environment and their situations and come up with national action plans that can enable them to address the issues that they’re facing. The challenge is the implementation of this resolution in the respective countries.

One of the ways that the UN and international organizations and local civil society can be more responsive to local women in peacebuilding is to support their efforts—give experiences and perspectives a voice, and recognition. A lot of times, there’s a lot that women do in-country, but this does not get emulated. So they need to be given the space, they need to be given the voice.

In terms of preventing conflict in their communities, many women are doing this already. Women are engaged in peacebuilding efforts, driving reconciliation efforts, and also preventing conflict in their communities. They need support. We also need to nurture women leaders because when we have more women who are taking up leadership positions, when you have more women who are actually participating in the political sphere—and as a result also in the peace processes—we will begin to see a different type of engagement. So, the issues around inclusion, the issues around women’s participation, the issues around enabling women to really get into the governance sphere is actually very important. And the UN is very well-placed to do this, especially because the member states can be held accountable for ensuring women’s participation in leadership and peace processes.

AOS: The 58th Commission on the Status of Women happening at the UN this week focuses on the Millennium Development Goals and the post-2015 development agenda for women and girls. How are peace and conflict, economic development, and women’s leadership linked?

AW: Peace, economic development, and women leadership are very much linked. Women often say, “Women cannot eat peace.” And this is really true. It’s great to have peace, but then also, economic development is very, very much a part of it. An empowered woman, a woman who can put food on her table, a woman who can have access to health, access to agriculture and rights to land—that’s a very different woman. This woman will ensure that her children get educated, will start asking questions about the type of education her children are getting. This type of woman will probably want to also promote her own education and engage in the governance space.

And so economic development is very, very important. If you look around the world, women are actually the mainstay of many societies. They’re involved in economic development, anyway. The problem has been that a lot of times this is not recognized, and it’s not even included in the calculation of the GDP of so many countries. This needs to happen because it’s a recognition that women are actually contributing to the economies of these countries.

I think this whole question of redefining what we mean by leadership—and especially in relation to women’s leadership is very critical; very often, leadership is defined mainly within the sphere of politics. Yet there are so many women who are taking the lead and doing amazing things in their lives. Think of a woman who is a single head of her household, has to raise eight children, her livelihood is frying fish and selling it by the roadside, and this woman goes on to educate her eight children. Some of them become lawyers, doctors, politicians. Surely, that’s a woman leader.

So we need to be able to have a definition that encourages women to really be the best that they can in everything that they be; for me, that is leadership. For example a local woman who is engaged in her children’s school parents, teachers’ association—that’s a leader. So we need to encourage women to stand up and take up leadership positions in every sphere of their lives. We need to create space for them to engage in political participation because the more women we actually get into the legislature—this is where laws are made—the more we will begin to see a friendlier environment for women to engage in. So, all these three are actually very much linked.

Women are not victims; they are strong, we see them every day, they are our grandmothers, mothers, sisters, daughters, it is us. We women beat the odds every single time! We are strong, we need to claim our space and shape our futures.