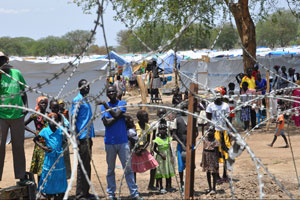 The UN base in Bor, South Sudan, was the site of an attack against the Nuer ethnic group where at least 30 people were reported killed on April 17, 2014. (Sudan Tribune/Flickr)

After the conflict in South Sudan took a particularly violent turn in mid-April, peace talks between the warring sides resume in Addis Ababa this week. David De Dau, executive director of the Agency for Independent Media in South Sudan, spoke to me about the recent use of radio to incite violence, the UN’s role in protecting civilians, and ways to advance the precarious peace negotiations.

This conflict started out with a primary political dispute within the Sudan People’s Liberation Movement, but two weeks ago we saw brutal ethnically targeted killings of more than 200 people in the oil town of Bentiu. What has changed in the past four months?

The genesis of the current crisis goes back to the dispute of transforming SPLM into a democratic political party that will chart a way forward for the development of South Sudan. However, that particular ideal of transformation has taken a different turn that has resulted in a number of killings, which has further deteriorated the relationship between various communities, and particularly the majority communities of the Dinka and Nuer.

As you saw earlier this month, there was an attack on the civilian forces in Bor, where 58 people were killed. And that was actually an act of revenge on the side of the opposition parties against the non–South Sudanese and also targeting other communities in Unity state by killing a number of them based on their tribal lines.

There are reports that some of these murders were spurred by broadcasts on a local radio station. To what extent is the media being used to incite violence, in your view?

Just before the outbreak of the current conflict, there were big disagreements between the government and the local media. And that was initiated when the president of South Sudan appointed a minister to the ministry of information who was unfriendly to the media.

But lately, the opposition forces in Unity state realize that the only way of reaching mass numbers of people is through the media. So, after capturing the radio station in Bentiu in Unity state, they used it and campaigned for the people to rise against certain ethnic groups; to kill men, women, and children; as well as even encouraging rape. And this has been a major concern to us in media circles, because if that is to continue, then it will escalate the conflict in the country.

What can be done to prevent the media from being used for hate speech?

Especially in hot zones like Bentiu and Upper Nile, the first thing to do is to temporarily shut down the radio stations. That would help in making sure that the messages—such strong messages—do not reach the people. And there are also radio stations from Juba here that people listen to in Unity state and in Upper Nile as well as Jonglei. So if they can make use of the UN radio that is broadcast from Juba then they can retrieve that information.

So, we are encouraging the media institutions that are based there to calm the situation and be able to shut down the radio stations before either the rebel group comes—or if the government orders them to say things that they are not supposed to say, things that are against the ethics and code of conduct of journalism. We are encouraging those colleagues working in the government-controlled media to be focused and mindful in their broadcasts, so that the conflict does not escalate further.

This brings to mind the recent anniversary of the Rwandan genocide, in which radio was also used to incite violence. Is South Sudan heading in that direction, in your mind?

In South Sudan, more than 90 percent of the population get their news through radio. If radio is used in South Sudan to spread hate speech, then it would mean that the current crisis would last longer, and it would take a different turn.

What kind of local initiatives are you seeing to promote peace between communities on the ground?

Actually, with the help of OXFAM Great Britain, we have done research, which we call Above and Beyond, that brings together voices of hope from South Sudan. That means there were some people from different groups that actually helped each other. For example, there have been some Dinka men and women that have been helped by the Nuer men and women, and vice versa. So in the current crisis that we have, the booklet that we produced shows how much our social fabric is actually still intact.

We also realized that the situation that we have in South Sudan is not as what happened in Kenya, the aftermath of election in Kenya, and what happened in Rwanda—where families were torn apart, where a man has killed his wife and children because the wife comes from other ethnic groups, and things of that sort. It has not happened here.

The UN peacekeeping mission has opened its doors to those fleeing violence. But we’ve seen that civilians are not always safe in the UN compounds. What could the UN and other international actors do better to protect civilians?

UNMISS, in short, have tried their best to protect the life of both communities and all South Sudanese and non-south Sudanese in this country. However, what seems to have affected UNMISS at the initial stages—which made many South Sudanese feel that UNMISS was either siding with the rebels or siding with the government—was simply because of how certain UNMISS officers were behaving towards certain issues.

But I think the perception is now being cleared. From the government side, there are no more comments coming up that the UN Mission in South Sudan is pro-opposition. And the opposition is now also looking at it differently.

So UNMISS, as a representative of the international community in South Sudan, is actually gaining ground now to be trusted by both parties. However there are a number of issues, political issues, that I think UNMISS should work on. When attacks have happened, I think UNMISS has been quite slow in responding because of the bureaucracies and issues to do with the internal arrangements.

The peace talks are now resuming in Ethiopia. What in your mind needs to change about these talks to improve their chances of success?

I was at the talks in Ethiopia last month, and I’m happy that the talks are resuming. One of the major issues I could clearly see is that some of the people are actually conducting the “business” of negotiations. I think they should look at these things differently: they should actually look at it as a place where they are going to mediate peace and discuss issues that are the central interests of local people that are bearing the brunt of this conflict.

If the two parties are discussing and talking about the cessation of hostilities in Addis and yet they are fighting on the ground, then that is hypocrisy. And the local population in South Sudan is slowly losing hope in these groups that are participating in the Addis Ababa peace talks. So people are hoping to see that there will be operationalization of cessation of hostilities and there will be a declaration of principles so that the peace agreement framework is actually brought forth so that both parties can discuss and agree on it.

I think all parties—and the international community in particular—should work very hard to pressure both the government and the opposition parties to settle this particular dispute. The government has released the last four [political detainees], who can now participate. And this is a way forward to settle some of these issues and see to it that there is a lasting peace brought forward for South Sudan.