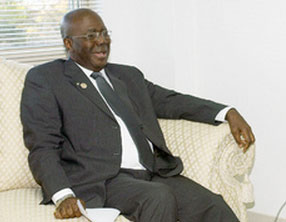 The death of former Sierra Leone President Ahmad Tejan Kabbah on March 13, 2014 provides an opportunity to reflect on the remarkable transition from a decade of civil war to peace in this small West African nation. In recent years, the focus of conflict resolution analysts has been on the role of the international community, including the deployment of the United Nations peacekeeping force from 1998-2005, the establishment of the Special Court for Sierra Leone, and the establishment of the UN Integrated Peacebuilding Office in Sierra Leone (UNIPSIL) which completed its mandate on March 31, 2014.

While there is no doubt that the UN, the Economic Community of West African States (ECOWAS), and the African Union all played important roles in this transition, the leadership role of President Tejan Kabbah has been overlooked. Yet he played a central role in keeping his countrymen committed to peace and a democratic transition, avoiding the pitfalls of other African countries that have emerged from conflict under authoritarian rule.

Tejan Kabbah had been a lawyer and district commissioner before becoming an international civil servant for almost two decades, working at the United Nations Development Programme (UNDP) in New York and in Tanzania before returning to Sierra Leone in the early 1990s. Originally intending to stay away from politics, he was quickly drawn into running for the presidency in the midst of the ongoing civil war. When the junior officers of the National Provisional Ruling Council convened the Bintumani Conference in August 1995, they were persuaded to stand down and allow elections to take place in February 1996. The Revolutionary United Front (RUF), led by Foday Sankoh, was engaged in a campaign of brutal violence, using amputations of innocent rural villagers in the east to dissuade people from participating in the election.

Kabbah won the election and came to office in these difficult circumstances. There was little international attention on Sierra Leone; the UN was slow to engage still seeking to recover from its failures in Somalia and Rwanda. Kabbah’s top priority became the search for peace and national reconciliation. The country’s economy had been in free fall for more than a decade, and many professionals had left. With a limited cabinet and few resources, Kabbah entered into the Abidjan Peace Agreement with the RUF in November 1996, only to find a few months later that Sankoh had used the agreement to re-arm.

In May 1997, barely a year in office, a junior officers coup forced Kabbah and his wife and inner circle to flee to Conakry, Guinea. The junior officers and the RUF (in absentia) seized power in Freetown as the Armed Forces Revolutionary Council (AFRC). The OAU at the Harare Summit, however, denied them recognition, and in February 1998 ECOWAS forces ejected the AFRC from Freetown enabling Kabbah to return to office. The next January, RUF forces again re-entered Freetown in a campaign of murder and pillage (supported by Charles Taylor’s forces in Liberia). Sankoh had been turned over by the Nigerians and was held in Pademba Road prison. Despite repeated betrayals, Kabbah again entered into negotiations with the RUF, concluding the Lomé Peace Agreement in June 1999. Sankoh was given the title of vice president only to again renege on his commitments by continuing to accumulate diamonds and smuggle weapons to his followers in the field.

Kabbah’s perseverance in seeking the path to peace and reconciliation through this long sequence of events has been fundamental to the restoration of democracy. The UN established UNAMSIL in 1998 and over the following six years restored peace to the country. Kabbah was re-elected in 2002 using his second term to revive the economy. With support from the World Bank and the IMF, he initiated and planned a number of infrastructure projects, including major road improvements. A program of security sector reform was launched, retraining the army and police to democratic standards. The peaceful conduct of the 2008 election was further tribute to his achievements.

The United Nations has now acknowledged the completion of the transition from war to peace. President Kabbah deserves great credit for the success of this transition. His leadership provided the anchor, still rare in the history of Africa, for the transformation from war to post conflict reconciliation and democracy. What lesson can we draw from this experience? Most importantly, that strong national leadership committed to democratic principles is essential to the prospects for durable peace and recovery. While other African countries have stumbled through conflict from one autocratic leader to another, Sierra Leone’s story demonstrates that there is a better outcome.

The country will continue to struggle with multiple challenges of youth unemployment and a weak economy. But it is quite unlikely that the dark days of the 1990s will reoccur. Tejan Kabbah’s leadership role should stand as a model for future leaders in Africa and elsewhere.

John Hirsch is Senior Advisor to the Africa Program at the International Peace Institute. From 1995-1998, he was US Ambassador to Sierra Leone.