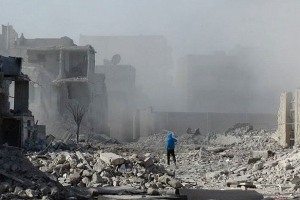 While the war in Syria rages on, the concept of justice may seem like a distant ideal. But one group is collecting documentation on war crimes and crimes against humanity so that perpetrators may be brought to justice when the conflict ends. At that time, “the decision to prosecute should be made so that the victims of this conflict have not died in vain,” said Jeffrey Howell, Chief of Staff for the Syrian Accountability Project, which was started at Syracuse University’s College of Law in 2011. In the long term, this can also contribute to peace by breaking the cycle of revenge, according to Mr. Howell, since “you can’t rebuild your country on revenge; you can only rebuild your country on justice.”

This interview was conducted by Margaret Williams, Research Assistant at the International Peace Institute.

What is the Syrian Accountability Project, and how might its investigation efforts help the international community to eventually prosecute crimes against humanity and war crimes committed in Syria?

The Syrian Accountability Project is a cooperative effort between practitioners, students, and nongovernmental organizations to investigate potential war crimes and crimes against humanity occurring in the context of Syria. What it’s going to enable the international community to do, we hope, later on is to bring the perpetrators of these crimes to justice. We use primarily open-source documentation up to this point.

We provide a little bit of analysis as to the information that is out there, putting different pieces of information together in a way that we hope will reveal patterns of conduct that we can use to prepare sample indictments for the individuals that either bear the greatest responsibility or those who are the most responsible—of course, both of those having different legal significance. But we think this will really assist the international community later on in not having to go back and start from scratch when the prosecution efforts do start.

Building off of this idea of not wanting to start from scratch, the head of the Syrian Accountability Project is Professor David Crane, and he, as you know, was chief prosecutor of the special Court of Sierra Leone from 2002–2005. What is the connection between the lessons he learned in Sierra Leone and the current proposal for a war crimes court for a post-conflict Syria?

Again, I can speak through my experience working with him. I’ll do my best to give my insights on that. I think the primary connection that I’ve seen in our work together is the subject of representational charging. Obviously when you’re dealing with a conflict on the scale of something like Sierra Leone or Syria, you’ve got so many crimes it’s impossible to possibly charge all of them. So, what we try to do through representational charging is, through our sample indictments, we try to give the Syrian people a sense that justice was done for the crimes that they suffered in their home town.

So we go through with our crime-base matrix and we identify crimes by region, and we try to get each type of crime represented so that—maybe we can’t charge everything that occurred, but when those indictments are released and the individuals are brought to justice, the crimes that occurred most often in certain areas are at least represented in some form in the final product.

For your data you said you primarily use open-source documentation. How does the Syrian Accountability Project ensure the authenticity of the data it receives, both through general open-sourcing and through its partners on the ground?

As far as authenticity, I think the key to that is really corroboration. As we’re going through the various sources that we do use, when we start to see patterns in those sources, that’s when we can really start to paint a better picture and determine the authenticity of information. Now, up to this point, as I mentioned, it is primarily open sourced. But a lot of the sources that we do use, we have had a relationship with a lot of the organizations that publish that data, and we are aware of their methodology and how they go about ascertaining whether or not the information they have is accurate. In some cases, they’ll go through eyewitness accounts. Some of them are based on networks on the ground. And some of them will speak to family members of victims, or they have other ways of determining what they’ve seen or what they’ve heard is in fact accurate.

So, we try to use the sources that we know have the most robust methodology, and we crosscheck those against other reports that they may just come out unconfirmed in the media or things to that effect. That’s really the primary process, is making sure that we can get as many sources as possible saying the same thing.

Professor Crane, as I’m sure you’re aware, has been in the field a long time, and really has a lot of experience in this area and has made a lot of friends along the way. And one of our original partners was the NGO No Peace Without Justice, and they have extensive conflict mapping expertise, going all the way back to the Balkan wars. Last summer, we worked directly with them in their Brussels’ office, sort of refining our methodology and benefitting from their expertise—and applying it to our work in Syria.

Professor Crane has known the leaders of No Peace Without Justice for some time. That’s just one example of one of the partners that we have. We also work very closely with the Syrian Justice and Accountability Center, and the Public International Law and Policy Group. Again, a lot of these are professional contacts that Professor Crane has had for a very long time, so we sort of worked with the friends we had when we started.

Is there a component of your work that addresses the situation Syrians find themselves in today as the conflict continues? Do you think there’s an empowerment component to your work?

We certainly hope so. Obviously—as many of our partners have also pointed out—it’s very hard to tell somebody that is going through something as terrible as this crisis that the answer is a court, is to bring these perpetrators to justice through the rule of law. As a phrase that Professor Crane very often says: “The rule of law is more powerful than the rule of the gun, but the latter is more tempting in a situation where you’ve had your family members killed and their rights violated.”

I think that when you do explain the bigger picture—and when I was in Gaziantep, I had the privilege of sitting down with many Syrians—and just explain that the objective here is a long and sustainable peace, and you can’t have that if as soon as the war starts to calm down, a second cycle of revenge killings occurs. So the idea of bringing perpetrators to justice as opposed to revenge—most of the time when you explain to the Syrian people that this can break that cycle and give them a peace that they can rebuild their country on, most of the time they understand that.

As the international community thinks through an eventual transitional justice process in Syria, the peace versus justice dilemma, which you just alluded to, continues to rear its head. How does the Syrian Accountability Project add to this debate?

That’s a tough one. The way that we would answer that is, again, sometimes they’re not mutually exclusive. I know there is absolutely this concern about when you have a conflict on the scale of Syria, where so many people are involved on both sides, it is really difficult to bring all the perpetrators to justice in the end—without this overwhelming number of cases to deal with. And so there is this temptation, as was done historically in Lebanon, just to sort of grant amnesty and move on. But I think that that does a disservice to the victims—especially the over 100,000 people killed in this conflict. I don’t think that their families can just move on if there this sort of general amnesty granted.

So, hopefully with our work we can assist in showing the world that we do have the law, we do have the jurisprudence to bring perpetrators of war crimes and crimes against humanity to justice at the close of this conflict, and that the decision will be a political one. We really hope that we can assist in this debate by demonstrating that we have the documentation and that the decision to prosecute should be made so that the victims of this conflict have not died in vain.