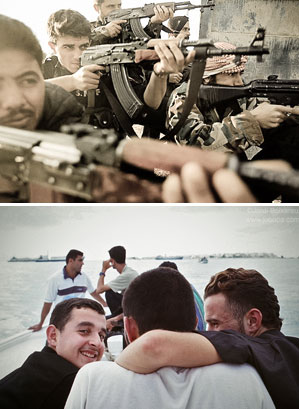 Since 9/11, the Middle East has been the main focus of international media. The image most commonly conjured by outsiders of the region is that of violence and Islamic extremism, not least due to the series of wars that have for years plagued the countries stretching from Afghanistan to Morocco, and which only have intensified since 2001. It is hard to recall a single day since that year when violence in the region has not made front-page news.

In today’s world, images have an enormous influence. In conflict settings and during times of upheaval, powerful images can bring people closer together or drive them apart; they can help countries reconcile or put strain on relations between them. Consider the compassion provoked by the image of a lone man in a white shirt halting a column of tanks in Tiananmen Square in 1989, or the damaging impact of the photos of US soldiers abusing Iraqis in Abu Ghraib prison in 2003.

By highlighting the existing conflicts in the Middle East, the media raises public awareness of the suffering; by concentrating overwhelmingly on the violence, however, it narrows the public’s focus and obscures all else related to the region, including, most importantly, the humanity of its people.

Though the vast majority of Middle East populations are concerned primarily with peace and security, outsiders perceive them as only interested in violence and extremism. Unfortunately, these perceptions often play a more important role than the reality. History teaches that mistaken perceptions, particularly of threats, can lead to the outbreak of conflict. In the Palestinian-Israeli conflict, for example, one of the main problems is mutual distrust—each side fears that the narrative of the other threatens its existence.

The Arab Spring has helped change perceptions somewhat, because it allowed for people outside the region to see that Arabs want the same things as anyone else in the world. It has challenged the notion of Arab exceptionalism; the theory that Arabs live under repressive dictatorial regimes because they choose to, or because there is some innate characteristic of their culture and religion that prevents them from seeking to live in a more democratic system of government and in a more open and free society. In the process, it has also shown that the region is not driven by religious fanaticism, or sheer bloodlust.

At the same time, the fall of regimes in Egypt, Libya, Tunisia, and Yemen has left a vacuum of power and brought about instability, resulting in acts of violence that have filled the front pages of many newspapers and magazines, as well as TV news programs. The civil war in Syria has done the most amount of damage to outside perceptions of the Middle East in the recent period. The acts of extreme violence there have reinforced a violent image of the region, and possibly reversed most of the positive attitudes that the so-called “Arab Spring” had provoked.

The conflict there is in a category of its own, not in terms of the levels of violence—though it has been very brutal—but due to the degree to which it has been documented. The widespread access to technology that allows individuals to record image and sound is unprecedented. In the case of Syria, this technology has served as a tool to denounce acts of violence, but it has also encouraged the demonization of people from the region as barbaric and vicious. One example from May 2013 is that of the rebel soldier, Abu Arrar, who, in the video, removes a piece of flesh (allegedly the heart) from an enemy soldier and takes a bite. This perception, the distance it creates between the viewer and the viewed, stripping the latter of humanity, may, for example affect the sense of urgency that the rest of the world may have in intervening

In contrast to the pervasive images of violence—the suicide bomber and the destructive, reactionary, and regressive culture with which it is associated is another example—the vast majority of Arabs want to live, and live fully. And in spite of conflict, repression, and poverty, people in the Arab world are living everyday lives. Whenever they are able to, they go to the park; they take their children for a picnic; they celebrate a birth, a wedding—life. At a time when the possibilities for leading full lives are so much in flux in the region, it’s critical that these moments, so underrepresented in the press, are also shown to the world. Altering perceptions is key to avoiding conflict. To understand that the people on the other side are, in fact, striving to satisfy the same basic human needs and desires would help breakdown the barriers between “us” and “them” and ultimately contribute in dissipating tensions between “East” and “West.”

Jose Vericat is a regular contributor to the Global Observatory.