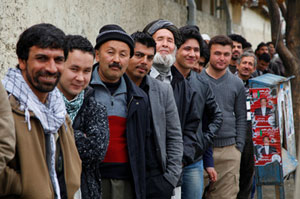 Afghan men wait in line outside a polling station in Kabul to cast their ballots, April 5, 2014. (UN Photo/Fardin Waezi)

On April 13, just over a week after balloting took place in Afghanistan’s crucial 2014 presidential election, the Independent Election Commission released the first batch of preliminary results. Accounting for approximately ten percent of the vote, and covering 26 of Afghanistan’s 34 provinces, these results yielded at least three important conclusions. First, Afghans seemed to vote across ethnic lines far more than what was predicted. Second, Ashraf Ghani, who won only 3% of the vote in the 2009 election, is indeed a front-runner. He won 37.6% of the votes in the preliminary count, in second place behind Abdullah Abdullah, President Hamid Karzai’s main challenger in 2009, with 41.9%. Third, the candidate who was widely presumed to be backed by President Karzai, Zalmai Rassoul, earned only 9.8%, putting him in a distant third place. If no candidate receives 50% in the first round, a run-off between the two top vote-getters will be held.

Rassoul’s poor showing is revealing insofar as it suggests that the presidential palace either did not have the will or did not have the capacity to rig the vote. Given the widespread fraud that took place in 2009 to support President Karzai’s re-election, this dog that did not bark is an intriguing and important development. This is the first presidential election in which President Karzai can’t run. A peaceful handover of power from one democratically elected president to another has never occurred in Afghan history. The mostly positive reports from election day have brought that achievement one large step closer.

The election was preceded by pessimistic speculations that it would be rigged or undermined by threatened Taliban violence. Election day put to rest many of those concerns. The large turnout, estimated by the Afghan Independent Election Commission (IEC) to be around 70%, was twice as high as in 2009. Many voters expressed to those who interviewed them that they had turned out to vote specifically to send a message to the Taliban that they were in favor of the current constitution and that they were not afraid of Taliban attempts to undermine that system. The high turnout will likely reduce the effect of fraud, but Afghan electoral authorities have recently stated that it received a high  number of complaints about fraud and irregularities, which could affect the result. Sorting through these complaints, and discarding votes if necessary, will take some time and will likely raise post-election tensions.

Also worth noting is the quiet role played by the international community, which was again very different from 2009. Karzai had long believed that the US had intervened in the 2009 election to unseat him. The release in early 2014 of former US Secretary of Defense Robert Gates’ memoir confirmed these suspicions. Gates wrote, “Meanwhile, [Richard] Holbrooke [then Special Representative for Afghanistan and Pakistan] was doing his best to bring about the defeat of Karzai in the August 20 elections.”1 Throughout 2013, when Afghan political actors were preparing for the election and deciding whether or not to run, international diplomats in Kabul, including the highly influential US embassy, steered clear of domestic Afghan politics, allowing the process to unfold without interfering and resisting the temptation that occurs in many countries far less important than Afghanistan to indicate a favored candidate.

This aloof posture was both unusual and beneficial. However easy it is for western diplomats to preach the benefits of democracy in the abstract, none really wish to consign vital national interests to the whims of a foreign electorate. In this case, the interests in question were vital indeed. For the US, the question of its entire future presence in Afghanistan was at stake. Following President Karzai’s refusal to sign the Bilateral Security Agreement negotiated between his government and the US until after the election, the significant question of whether or not the international community would have forces in Afghanistan suddenly depended on the election. This meant that an issue deemed to be crucial to the security interests of the United States depended on the conduct of Afghan institutions and the discrete decisions of millions of Afghans whether to vote or not.

What surprised the world was that the Afghan voters were both numerous and emphatic in declaring their preference for an ongoing international role in Afghanistan. All of the leading candidates have pledged to sign the BSA if elected. The act of voting by Afghan citizens—no matter who they voted for—was an implicit endorsement of the current political system and a rejection of Taliban proposals to significantly revise it.

If April 5 was a major achievement for Afghanistan, clarifying a number of open questions and settling many doubts, it has also revealed significant challenges ahead. First, there will undoubtedly be contestation of the first round results. The longer the process of adjudicating these complaints takes, the greater the risks of instability. Second, if a run-off election must take place, it will provide both another tough test for Afghan institutions—electoral, security, and political—as well as another opportunity for the Taliban to demonstrate its relevance. The second round will also have its own particular challenges, which could include reduced turnout and more voting on ethnic lines. It is possible that the second round could undo many of the achievements of the first round.

The functionality of Afghan electoral institutions, the patience of the presidential candidates, and the constructive role of the presidential palace in the weeks ahead will determine the success or failure of the rest of the political transition. Afghan voters risked credible threats to their lives and overcame what would have been an understandable cynicism about democracy—given the fraud in 2009—to cast their votes on April 5. The electoral institutions now need to demonstrate that they those votes will be respected, and political actors need to give those institutions space to function.

The indications so far, at least, are positive. Up to now, Afghan voters, the political candidates, and the government institutions have demonstrated a respect for the democratic process that few would have bet on a few months ago. Finally given the opportunity to speak, Afghans seem to have expressed a surprising confidence in their own ability to determine their political future.