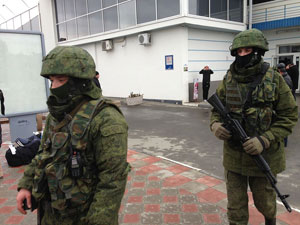 A few months ago, no one seemed to predict Russia’s grab of Crimea and the fast-moving events that are now threatening to further destabilize the political, social, and economic situation in Ukraine. As events unfold, it seems clear that Russia is intent on changing Ukraine’s governance system by forcing it to implement a new constitution that would devolve power to the eastern parts of the country.

The Kremlin’s ideal outcome is a loose federation, which, unlike American federalism, would allow for far greater independence of Ukraine’s provinces. This independence would allow Russia to cooperate with the eastern provinces without having to go through Kyiv, which could be beneficial to various sectors of the Russian and local eastern Ukrainian economies—especially their arms industries.

This is why, in my opinion, Russia is trying to inspire a revolutionary mindset in eastern Ukraine and use pro-Russian inhabitants and forces as a way to destabilize the situation in the whole country and provoke the Ukrainian government into using force against the separatists instead of concentrating on societal reforms. The unrest is certainly proving to be a test for the Ukrainian government, and could allow Russia to determine if Kyiv is really able to control all of the country’s territory, while also providing a possible pretext for Russian armed intervention, ostensibly to protect the separatists, especially if some kind of civil war starts. Nevertheless, the cost of an intervention would be very high, which is probably why Russia is pressing for the federalization of Ukraine by using other tools of influence, most of them economic.

The first such tool is the price of Russian natural gas on which most of Ukraine is dependent. After the new government came to power in Kyiv, the giant Russian monopoly Gazprom terminated an existing gas contract with Ukraine and imposed an increase in gas prices from about $268 to $485 per thousand cubic meters. This dramatic increase not only will hurt the Ukrainian economy but also the pocketbooks of ordinary people who will suffer large increases in heat bills; food and household costs will also increase to reflect associated fuel costs. Moreover, Gazprom is pressuring Ukraine to pay back its outstanding gas debt of $2.2 billion, accrued over recent years, knowing full well that Ukraine doesn’t have the money to repay it. These two issues are being used by Gazprom to conjure a threat that it will turn off the tap. With summer coming, this threat does not hold as much power, but come autumn, it could find traction, translating (the Kremlin may be hoping) into people protesting against the government in Kyiv.

The second tool of influence is a Russian embargo on Ukrainian products. For some eastern Ukrainian regions, this could be especially painful, such as for Kharkiv, where 46% of local exports (especially machinery) go directly to Russia. Other areas in the east face a similar situation and, in an extreme scenario, could result in companies that cooperate with Russia having to let go of employees, worsening the already fragile social security mechanisms in the region and possibly leading to further increases in anti-government and anti-West protests.

The third tool is not economic; it is outright propaganda. Russia is using the sparkling example of Crimea—where, since the annexation, people have been able to return to their lives and work, retirees have been granted bigger pension payments, and several thousand Ukrainian soldiers have joined the Russian side—to appeal to the inhabitants of eastern Ukraine. At the same time, Russia is trying to highlight the plight of Russian-speaking Ukrainians to an international audience using its “Russia Today” (RT) channel, available on many international television systems. Russian media allows the country’s authorities to hold themselves up as the only alternative to the government in Kyiv, which they claim cannot cope with the situation on their hands.

With all this pressure and propaganda in mind, it may occur to some that Russia’s notion of federalization may be a good compromise to stabilize Ukraine. Though even if Russian-style federalization is imposed, it’s doubtful the Kremlin has excluded the possibility of taking Ukraine by force.

Anna Maria Dyner is an analyst with the Polish Institute of International Affairs, Warsaw, Poland.