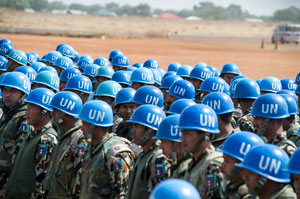 Only two and a half years after its independence, South Sudan was plunged into crisis when fighting erupted within the presidential guard on the night of December 15th. The violence spread quickly across the capital, Juba, and to the rest of the country, leaving over a thousand people dead; 870,000 people fled their homes, 145,000 to neighboring countries.

The outbreak of violence has renewed focus on the response capability of the United Nations Mission in South Sudan (UNMISS). Since its deployment in 2011, the mission has been plagued by questions about its effectiveness in carrying out its mandate to protect the civilians of South Sudan while at the same time supporting the government in statebuilding—questions the crisis brought into stark relief. However, the ongoing crisis presents an opportunity for UNMISS to re-examine its mandate to better align its objectives with the needs of the people of South Sudan.

Over 85,000 civilians sought refuge in UN base camps around the country, leaving UNMISS in a predicament: how could it uphold its mandate to protect civilians against the government troops it was supposed to support? As fighting erupted in the capital Juba, UNMISS was unable to deal with the crisis as it quickly spread across South Sudan and its head, Hilde Johnson, later admitted they were taken by surprise.

Accounts of precisely what triggered the violence vary, but what is clear is that fighting broke out between troops loyal to President Salva Kiir and those backing the former Vice President, Riek Machar. The unresolved power struggles and ideological differences within both the SPLM and the Army exacerbated tensions leading up to the crisis that erupted in December. Moreover, within the two and half years since independence, the SPLM failed to transition from a political movement fighting the government in Khartoum into a viable political party seeking to influence policy and represent citizens’ interests.

Amid the euphoria that surrounded the creation of South Sudan, the UN Security Council approved a modest mission deployment of 7,000 military staff and 900 police and civilian staff in 2011. This configuration aimed at appeasing both UN member states that were concerned with UNMISS being able to actively engage in Protection of Civilians and those member states that were concerned with deploying a large mission and the associated costs. The UN Security Council never adequately invested in this relatively small the peacekeeping mission, which continually lacked the high-end military equipment and engineering capacity that was envisaged from the start. Consequently, when violence broke out, UNMISS was unable to adequately carry out its mandate to protect civilians.

Within the first two weeks of the crisis, the mission found itself having to protect over half a million people with limited military capacity as the fighting raged on.  The Security Council adopted resolution 2132 on December 24, 2013, to increase the troop ceiling level from 7,000 to 12,500 troops and the police level from 900 to 1,323, specifically in order to help enhance the protection of civilians and provide humanitarian assistance. With only a few hundred troops having been deployed, efforts are still ongoing to meet the requirements of the troop increases in order to boost the mission’s capacity to protect civilians. Despite the fact that warring parties signed a ceasefire agreement on January 23, both sides have violated the terms of the ceasefire, and the situation remains critical in the fragile country.

Nonetheless, as the fighting spread across the country, UNMISS did open up its camps to shelter over 85,000 civilians in nine of their compounds, which were never designed to accommodate large numbers of people. In doing so, the mission was able to protect civilians who were under imminent threat, which saved their lives. Moreover, during the initial days of the crisis, armed youth killed two peacekeepers and at least 20 civilians under UN guard when they forced their way on to a UN base camp.

Immediately following the onset of the violence, Hilde Johnson said the mission had “not seen the crisis coming,” and that the scale and gravity of it was unexpected. Since its deployment in 2011, UNMISS has been faced with a myriad of challenges, and thus it comes as no surprise that the mission was thrown off balance. The mission was beset with problems including having a reluctant partner in the form of the Government of the Republic of South Sudan (GoRSS), whom it saw as primarily responsible for providing security and protection for its population. From the time South Sudan gained independence, the GoRSS was deadlocked in hostilities with Sudan over border disputes and oil agreements, which nearly escalated into full-blown war between the two countries in 2012. UNMISS did not have the effective partner in the GoRSS that it needed to carry out the necessary security sector reform and the judicial and rule of law reform that were so urgently required. Moreover, the continued security challenges around the country, particularly in conflict prone region of Jonglei between April 2011 and January 2012, meant that UNMISS was never really able to carry out peacebuilding as it had been mandated to.

Despite these existing tensions and signs of discord, UNMISS remained woefully unequipped to deal with the dire situation that was to follow in December. Questions have to be asked as to whether the UN Security Council could have moved faster in addressing concerns with the mandate given the warning signs—UNMISS did employ early warning mechanisms to track violence. Indeed, there were concerns that UNMISS had difficulty in reconciling these apparently contradictory roles of its mandate of working alongside the GoRSS and at the same time monitoring the misconduct and human rights abuses carried out by the government. Ultimately, while the ferocity of the crisis was unexpected, the signs of growing instability were hard to miss, including the internal challenges within the SPLM/A and the sacking of Vice President Machar along with the entire cabinet by President Kiir in July 2013, which should have set off alarm bells of a deepening political power struggle and discord in the fragile country.

This crisis presents the UN Security Council with an opportunity to re-examine the current UNMISS mandate to appropriately address the emerging concerns over the protection of civilians. The Council must offer greater clarity on how the protection of civilians should be prioritized and implemented. Moreover, UNMISS has to be seen as acting as impartial rather than being perceived as partial to one side or as a party to the conflict.

Beyond the Security Council’s decision to increase uniformed personnel to nearly 14,000, UNMISS must define and use its current capacity based on priorities on the ground to protect civilians. There are currently 75,000 displaced people in and around UNMISS “protection of civilians” sites in South Sudan who continue to need protection as UNMISS awaits reinforcements.

The Security Council has reiterated its support for UNMISS in its vital mission to protect the civilians of South Sudan, including foreign nationals; to conduct human rights monitoring and investigations; and to facilitate assistance to populations in need. Furthermore, the Council has called upon all parties to fully cooperate with UNMISS, and to cease obstructions to the implementation of the mission’s mandate. However, for UNMISS to regain its longer term credibility within South Sudan, the UN Security Council must back any declarations and resolutions with political and military investment.

As the latest round of peace talks are set to resume on March 20, 2014 in Addis Ababa, UNMISS still has a vital role to play in ensuring lasting peace and security in South Sudan. UNMISS must continue to support justice and reconciliation dialogue in efforts to heal the country and avoid relapse into conflict. Efforts must be made to revive the stalled process of peacebuilding, which has made little progress since South Sudan’s independence in 2011, along with a fully inclusive national dialogue and a comprehensive constitutional review, in order to have lasting peace.

Priscilla Nzabanita is a Research Assistant in the Africa program at the International Peace Institute.