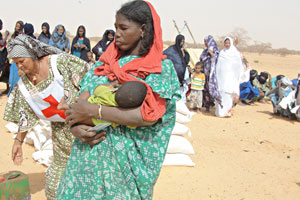 Last month, separate incidents where two aid workers were injured and five others went missing in northern Mali caused speculation that humanitarian workers are now more at risk. But according to François Grünewald, head of Groupe URD, a leading French think tank specializing in humanitarian and recovery issues, it is still unclear what happened.

“Up until recently, the impression was that humanitarians were kind of protected by their status as humanitarian actors. Has this situation changed or not? We don’t know,” he said in this interview from Bamako.

Mr. Grünewald said some parts of northern Mali are empty since Malians fled the violence to refugee camps in Mauritania, Burkina, and Niger. “Assistance is being delivered in the camps and not yet deep inside northern Mali,” he said.

“However, humanitarian actors do have access to the riverine areas of the Niger river. So they can access these communities and deliver through local NGOs and other local partners,” he said, adding, “Difficulties will arise, of course, if local actors and national staff of aid organizations become targets themselves.”

“It is clear, however, that if the situation deteriorates in terms of food security indicators and if humanitarian access does not improve, then we have a problem,” he said.

Mr. Grünewald said that a recent workshop in Mali hosted by Groupe URD and the UN Office for the Coordination of Humanitarian Affairs (OCHA) tried to better understand who the different stakeholders are on the political, military, and security scene in northern Mali. “By and large, we have some ideas, but we have no clear vision of what the logic is behind those actors,” he said.

The workshop also brought discussions of innovative ideas around  military/humanitarian planning and new technologies to increase access and safety. One of the greatest challenges, however, is how to reach out to different violent groups in Mali.

“Unless we find a way to establish dialogue with [the political movements and radical groups in Mali] so that we can explain that humanitarian actors are not the enemy, that we are not political, that we are just there to help suffering people, we will continue facing substantial threats in the country,” he said.

The interview was conducted by Jérémie Labbé, Research Fellow at the International Peace Institute. He tweets at @jeremie_labbe.

Jérémie Labbé: I am here today with François Grünewald, Executive and Scientific Director of Groupe URD, a leading French think tank specializing in humanitarian and recovery issues. François, thanks for being with us on the Global Observatory today.

You are currently in Bamako, Mali where Groupe URD and the UN Office for the Coordination of Humanitarian Affairs (OCHA) recently organized a workshop on humanitarian space and humanitarian access in Mali. What is the overall assessment that came out of this workshop concerning the security situation in northern Mali, particularly with regards to recent security incidents concerning humanitarian actors, such as the abduction of five humanitarian staff affiliated to the Red Cross in early February and an improvised explosive device that injured two staff of the organization Doctors of the World last week?

François Grünewald: There are a few things. One, of course, is to try to better understand who the different stakeholders are on the political, military, and security scene in northern Mali. By and large, we have some ideas, but we have no clear vision of what the logic is behind those actors. For example, it’s far too early to enter into conjecture to try to identify what has happened with the staff of the International Committee of the Red Cross. Similarly for the Kidal incident against Doctors of the World, it is still not clear what happened.

Has this situation changed or not? We don’t know. It’s not on the basis of two incidents that we can really draw conclusions. So we still have to understand better, to explore further, and to develop more networks to try to understand what has happened.

This being said, it’s clear there’s an added perception of risk now. For a long time, there was this kind of hypocrisy where humanitarian actors were talking about “nonvisible expatriates.”

FG: Which means expatriates from African origin,. This was a bit of joke for me because, you know, you come from Congo and you arrive in Timbuktu, in half an hour, everybody downtown knows who you are, and that you are not from Mali. There was this kind of perception that the color of your skin might offer better protection. For me, it’s not true. For me, it’s just because they were less expensive hostages; that nobody would pay as much for a Congolese or Burundian than for an American or French. So, there was a bit of hypocrisy with this idea of “nonvisible expats.” The idea of “nonvisibility” is a wrong concept. The reality is that what protects them is their lower value on the “hostage market.”

Now, we realize that the situation is more complicated. But we don’t know exactly how much, why, and how. We are still in a kind of exploratory stage, trying to understand what is really happening. To the best of my knowledge, we don’t know.

JL: The UN Multidimensional Integrated Stabilization Mission in Mali (MINUSMA) has been created less than a year ago with a complex mandate to stabilize the country, extend state authority in northern Mali, facilitate the reconciliation process, protect civilians, and facilitate the delivery of humanitarian aid. This has created some concerns among some humanitarian actors that the political aspects of the mandate might conflict with the need for impartial, independent, and neutral humanitarian aid. What is the assessment of the participants to your workshop concerning the impact of the UN mission on humanitarian access in the country?

FG: Humanitarian actors are eager to identify ways to improve the work with MINUSMA. Of course MINUSMA has different parts: you have the military component and the civil component which itself has two branches: political affairs and civil affairs. It is critical to work well with all of them. With the military component, the stage has been set up very early last year when [France’s military operation] Serval arrived, with the creation of a sort of interface/firewall between humanitarian actors and the military, through which both communities can talk. On the military side, you have what is called the CIMIC, a civil-military cooperation office. And on the side of humanitarian actors, you have a similar structure run by OCHA known as the UN-CMCoord. Both structures talk together. If humanitarian organizations have issues to raise with the military, they can go through this interface/firewall so that they can discuss and exchange while they are also protected, as not being perceived as embedded with the military.

This was one of the mechanisms established very early in 2013 at the arrival of Serval, and it still continues and is still quite efficient. I think it’s one of the best ways for the humanitarian community to liaise with and share concerns with the military component of MINUSMA. The caveat is that many of the African battalions of MINUSMA, which are big in the field, do not necessarily have this kind of CIMIC culture, so this is something that would have to be created.

FG: The situation is a bit more complicated than that. We have to take into account that the population of northern Mali is not yet back. Many are still living in refugee camps in Mauritania, Burkina, and Niger. So, if you go deep inside the northern part, most of the population is still absent. Assistance is being delivered in the camps and not yet deep inside northern Mali.

However, humanitarian actors do have access to the riverine areas of the Niger river. So they can access these communities and deliver through local NGOs and other local partners. I think this is still happening. Difficulties will arise, of course, if local actors and national staff of aid organizations become targets themselves. We don’t know yet if it is the case with the two security incidents that took place in February [in which national employees of aid organizations were affected], but it is indeed a concern. It is clear however that if the situation deteriorates in terms of food security indicators and if humanitarian access does not improve, then we have a problem.

JL: Were innovative solutions discussed during this workshop about how to improve access in northern Mali? How to improve humanitarian space, to ensure the delivery of programs and the safety of the staff?

The use of new technologies, including information and communication technologies, is obviously another important element when it comes to the safety of aid workers and humanitarian access, for two reasons. First, new technologies can directly contribute to increasing the safety of staff by ensuring better communication, exchange of information, as well as better tracking of movements of vehicles, for instance, enabling for a more rapid reaction if aid staff run into problems.

Second, new communication technologies open up opportunities to deliver aid in innovative ways, such as using mobile phones for cash or asset transfers to the population, allowing remote programming when humanitarian access is difficult. However, it does not solve all problems since, even if we do asset transfers through telephones, we still need targeting of the affected communities, we still need impact evaluation. This always requires a presence in the field. So we can be innovative and increase and adapt ways we are working to respond to that challenge, but it does not solve all problems.

Therefore, another element is also to find ways to have discussions with the different actors of violence. You have the organized political movements, such as MNLA and others. How can we better engage with them, although they are not the main threat? And we have all the other more radical groups: the MUJAO, AQMI (al-Qaeda in the Islamic Maghreb) and Ansar Dine. And indeed, unless we find a way to establish dialogue with them so that we can explain that humanitarian actors are not the enemy, that we are not political, that we are just there to help suffering people, we will continue facing substantial threats in the country. And there are certainly ways to do so, by explaining, for instance, some of the connections between international humanitarian law—the Geneva Conventions—and the Koran. At this stage, we are not ready to do that. Identifying how we can engage with those actors is something very, very challenging, very difficult, and I think there is no simple solution.

JL: François, thank you very much for sharing your thoughts today on the Global Observatory.