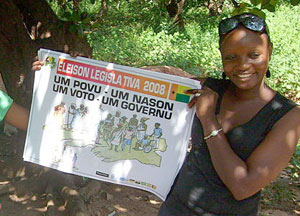 A voter education poster displayed in Biombo, Guinea-Bissau, during the parliamentary election, November 2008.

It is widely accepted that elections do not make a democracy, but they are generally viewed as a key first step in that direction. As the campaign for legislative and presidential elections kicked off in Guinea-Bissau last Saturday, it was clear that hopes for this first step may be overstated.

Guinea-Bissau is one of the world’s poorest nations, and the West African country of 1.7 million people has been plagued with political problems over the last several years. No president has ever fully completed his term. And though the late 2000s were marked by a modest yet cautious increase in international confidence in the country, the most recent period of unrest was triggered by the March 2009 assassination of the head of the armed forces and the apparent revenge killing of the president shortly afterwards. Three years later, the military carried out a coup in April 2012 as a new government was being formed, removing the front-runner for the presidency, Prime Minister Carlos Gomes Júnior.

Ever since, the military has continued to hold a tight rein on power. Several times after the coup occurred, plans to hold elections have failed; they are now slated for April 2014, though there is a strong possibility that these will be delayed.

However, even if these elections are held—providing some increased legitimacy to the new government and putting the international community more at ease—it is unlikely that stability will follow. The elite level power struggles perpetuated through certain individuals and groups will remain intact and undealt with.

Guinea-Bissau’s army has a history of being overly involved in political affairs since the country achieved its independence from Portugal in 1974, as evidenced by cycles of coups, attempted coups, repression, and counter-coups. Divisions within the military sometimes follow ethnic lines, and certain factions have been accused of trafficking in drugs and arms. In April 2013, a complex sting operation by the US Drug Enforcement Administration led to the indictment of two notorious drug kingpins: one was the former chief of Guinea-Bissau’s navy, Rear Admiral José Américo Bubo Na Tchuto, and the other was the head of the armed forces, General António Indjai.

Widespread corruption, chronic and severe poverty, a weak state, and personal rivalries between those who fought in the war of independence and those who did not further exacerbate the power struggles that have produced so much conflict in the past. These are, unsurprisingly, echoed in the political realm. In the lead up to the April elections, the biggest political rivalries are between the African Party for the Independence of Guinea and Cape Verde (PAIGC) and the main opposition party, the Party for Social Renewal (PRS). Despite a legal appeal to prevent the PAICG candidate, former Finance Minister Jose Mario Vaz, from contesting the election due to his suspected embezzlement of funds, the Supreme Court cleared the way for him to run earlier this month.

These power struggles may become even more pronounced in the weeks and months after the elections as the effects of the shift in political power become apparent. When leaders refuse to give up their power, for example, post-election violence often ensues.

So, what can be done? Make no mistake, this nation has much potential. It was one of the leading producers of cashews; it has a lush and scenic tropical coastline that would be attractive to tourists; and, most recently, it has been discovered that oil reserves off its shores are larger than first estimated. However, without proper governance in place, it will be impossible to meaningfully develop these resources so that the country can thrive economically. And, of course, good governance cannot be cultivated if the military and other powerful forces are meddling in the political realm.

An inexpensive and low-risk, yet potentially very impactful, investment could be made in holding an elite-level mediation process with key political and military figures. There are a number of different international and regional actors that are well-placed to convene such talks, including the United Nations, the Economic Community of West African States (ECOWAS), and the African Union. The aim of these talks would be to promote increased cooperation for everyone’s benefit and to chart a path forward while not denying the need to reconcile past differences.

Undoubtedly, one of the biggest and most difficult issues to deal with will be the need for security sector reform and ensuring that proper incentives and resources are in place in order for these reforms to occur. Not only does the military need to be reduced in size and professionalized, it also needs to be brought firmly under civilian control and oversight (the US State Department reports that authorities have failed to maintain effective control over the security forces and that they committed human rights abuses last year). Previous attempts at security sector reform have fallen short because these goals have not been met.

However, holding elite-level talks is easier said than done, and previous efforts have failed—even when they had the support of Guinea-Bissau’s president. So, the first step would be to create sufficient political will among all the key actors to ensure their active participation in the talks, and clearly this is no easy task.

A much a more invasive and expensive course of action would be to establish a peacekeeping force in conjunction with undertaking extensive security sector reform that would see the army reduced in size and moved into the barracks. A UN force would likely be rejected by the Guinea-Bissau government, making an ECOWAS or AU peacekeeping mission a more promising option. This could improve the security situation while also reducing challenges related to drug trafficking, allowing a solid platform for statebuilding to emerge.

Of course, such an intervention doesn’t come without inherent risks and other difficulties. Aside from the matter of using a large enough peacekeeping force that has the support of the government and has been invited by them to intervene, there are questions related to defining a robust mandate for the mission and establishing clear exit plans. In order to maximize effectiveness, any future peacekeeping mission would ideally be very closely linked to state building, poverty reduction, and anti-corruption efforts. Such a mission might also help deter terrorists and other nefarious actors from using Guinea-Bissau as a staging and training ground.

However, the truth of the matter is that the international community seems to have very little interest in the country since it doesn’t hold much geopolitical importance at the moment. So, the first step (like in any other forgotten conflict) will be to secure increased international and regional attention and assistance. This requires international advocacy and lobbying, and currently no one is doing this, so Guinea-Bissau seems destined for more of the same misery for the foreseeable future.