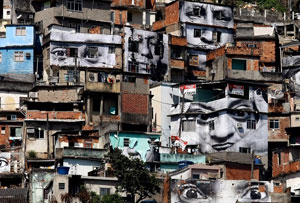 In a favela in Rio de Janeiro, the artist JR drew attention to the plight of residents by postering giant faces on some of the buildings, 2011. (Thiago Trajano/Flickr)

Brazilian diplomats often like to remind their counterparts that their country hasn’t picked a fight in its neighborhood for almost 150 years. Brazil very reluctantly joined the Second World War in 1944, but played an important role in helping reconstruct Europe in its aftermath. They are justifiably proud of their historical commitment to peace; it is a legacy worth preserving. Yet there are signs that Brazil’s forward momentum in promoting safety, security, justice, and governance is lagging. Since hosting the Rio+20 conference in 2012, Brazil has been coy about the place of these issues in the post-2015 development agenda. During recent negotiations in New York over future sustainable development goals (SDGs), Brazil’s Ministry of Foreign Affairs appeared to be taking them off the table entirely.

At an open-ended working group meeting on the shape and content of the SDGs last month, Brazil’s ambassador to the United Nations, Antonio de Aguiar Patriota, started out in familiar enough territory. In his statement to the United Nations, he made it clear that his government believes “stability and peace are essential for development.” The veteran civil servant went on to say that sustained peace could only be achieved if governments and civil societies collectively tackled the root causes of conflict. There was nothing especially novel about his opening remarks. The ambassador was echoing a number of his compatriots who, over the past few years, have spoken on the interdependence of security and development.

As could be expected of an experienced former foreign minister, the opening preamble of Ambassador Patriota’s speech tracked perfectly with the country’s declared foreign policy priorities. In calling for redoubled stability and peacebuilding in troubled spots, it was neatly aligned with Brazil’s considerable peacekeeping activities in Haiti and Lebanon. It also underlined the importance Brazil attaches to conflict prevention and the country’s desire to reform and strengthen multilateral institutions, not least the UN Security Council and the Peacebuilding Commission, which preside over matters of war and peace.

But for all its good intentions, the latter sections of the ambassador’s statement sounded flat, and, in some parts, outdated. At the outset, Brazil seems to have settled on a conservative and narrow definition of development. Forged during the Rio+20 meeting in 2012, development is confined to social, economic, and environmental dimensions alone. Politics, along with matters of safety, justice, and governance, are glaringly absent. And yet it is precisely the lack of personal security and the prevalence of impunity and corruption that are preventing development in Brazil’s partners such as Guinea Bissau, Haiti, and Timor-Leste. So why does Brazil exclude these latter issues from its definition?

It could be that its diplomats fear they distract from what they see as “core” development priorities. They may also be loathe to “securitize” development, a regular criticism of “western” aid programs. Either way, an uncritical treatment of development may not only result in wasted investments, it could actually do unintentional harm. Brazil seems to be resorting to an ideological—rather than an evidence-based—rationale when it comes to the SDGs.

There is in fact considerable evidence demonstrating the ways in which insecurity, injustice, and poor governance perpetuate underdevelopment. The World Bank’s 2011 World Development Report put these relationships in stark relief: “a country that experienced major violence over the period from 1981 to 2005 has a poverty rate 21 percentage points higher than a country that saw no violence.” It also signaled how a group of roughly 50 states is falling behind and how concentrated support focused on security, justice, and jobs could reverse their trajectories. The good news is that there are excellent examples, including from Brazil, of ways in which violence prevention, justice promotion, and good governance can yield development dividends.

The ambassador also set up a false dichotomy between “conflict” on the one hand, and “violence” on the other. Conflicts, he argued, are predominantly “international” issues and thus best dealt with through multilateral mechanisms, not least the UN Security Council. By contrast, violence was described as a purely “domestic” issue subject exclusively to national jurisdiction. This kind of statement is at odds with virtually all scientific research on conflict and violence over the past decade. In fact, the vast majority of today’s armed conflicts are “internal,” even if they are fueled in part by complex global drivers. Likewise, collective and interpersonal violence, including in Brazil, is sustained by both local and international stressors, not least drug trafficking, arms dealing, and price shocks. There are always risks when speaking of preventing conflict and violence of giving space to interventionist agendas. But to ignore them altogether is equally irresponsible.

Brazil has a major role to play in the new emerging world order, including influencing the trajectory of development for the next 15 years. But it will not fulfill its enormous potential by looking backwards. Nor should it side-step critical issues such as peace, safety, justice, and governance which are intertwined with development. There is today a major opportunity for the country to help define the rules of the game rather than playing by those set by others. Brazil brings great credibility and legitimacy to the table, together with a clear commitment to peacebuilding. But it will not exert greater influence by ignoring the scholarly evidence on the security and development nexus or sticking to conservative interpretations of development. Brazil has considerable experience at home in tackling insecurity, redressing impunity, and countering corruption. It has lessons to share, and many are eager to listen to what it has to say.